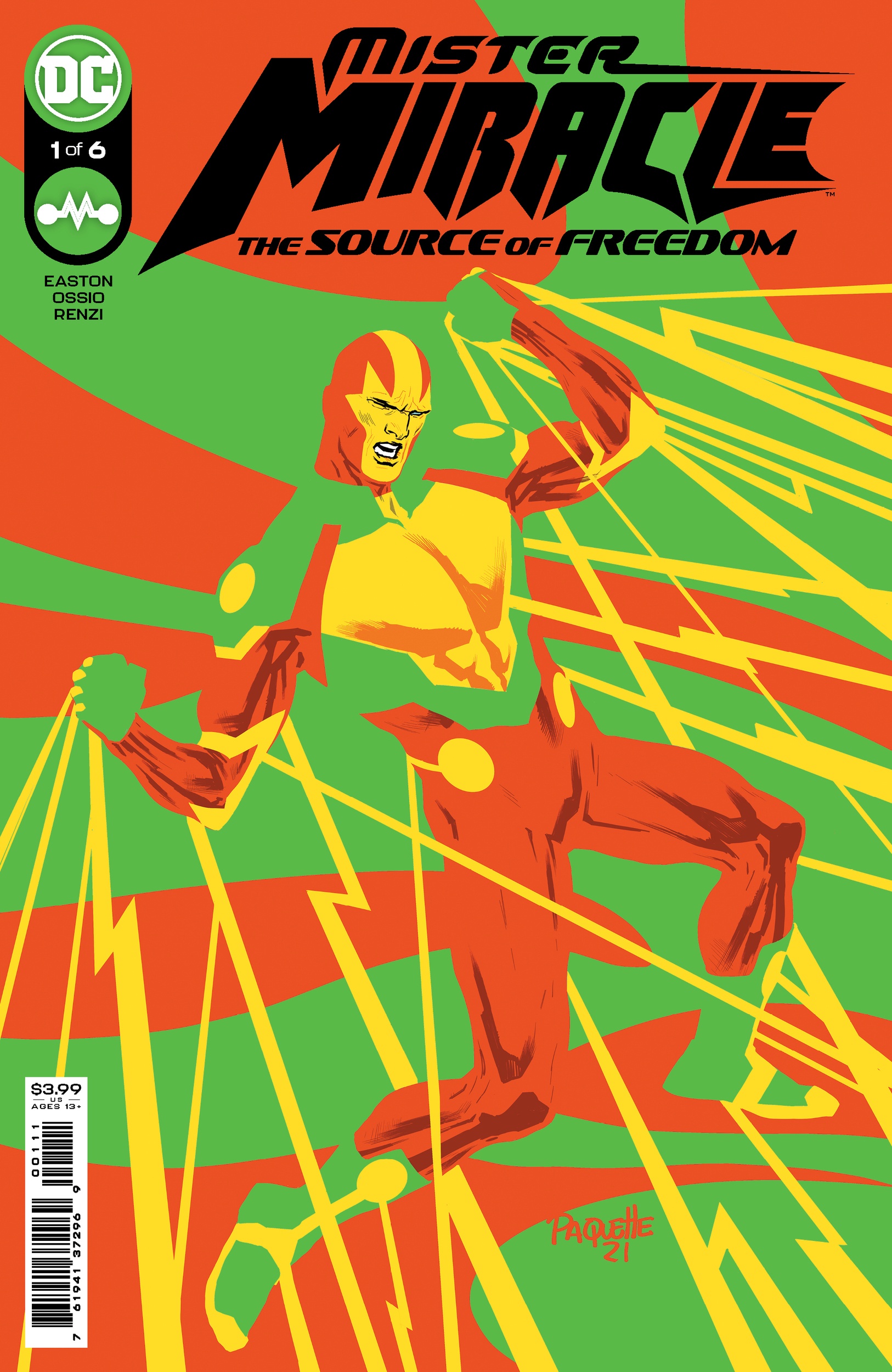 The future of DC comics is looking bright. They seem to have taken steps forward in this world of identity swapping heroes a tad bit better than their crosstown company rivals. Fans of incredible characters like Mister Miracle are the ones reaping the benefits. I got the chance to sit down with writer, screenwriter, and educator Brandon Easton, to discuss his upcoming six-issue mini-series; Mister Miracle: The Source of Freedom, and the task of introducing a newer and much Blacker Mister Miracle to thousands of fans.

Mister Miracle Is Black, My Mother Box Too

Black Nerd Problems: How does it feel to be writing this Black iteration of Mister Miracle right now?

Brandon Easton: “I mean, to be working with DC comics in any capacity is pretty amazing, considering. I’ve been in this business since like 2002 or so and there were so many things that happened that led to me even being here. So there’s a level of gratitude that I cannot adequately convey through just my words. I hope that people will really understand when I say I am very happy to be here, very gracious to all the folks that opened the door and allowed me to have this opportunity.

Dealing with an African-American hero in this political and social culture is a great responsibility; to make sure I represent who we are as a people, which is very diverse. It’s impossible to say that there’s a single Black or African-American identity, but I definitely want to speak to the core issues that we deal with on a day-to-day basis and I think I touch on a lot of that in the mini-series. So with that being said, it feels great, you know? I get to work with and redefine a character that’s known and loved by so many people, and the Shilo Norman version is going to be a little bit different than what anyone’s accustomed to.”

BNP: Where did most of your inspiration come from when writing Mister Miracle: The Source of Freedom and the social issues or important topics that are included in this book?

Brandon: “So, two things specifically inspired me. One was about three or four years ago at WonderCon in Anaheim. I don’t cosplay. I just don’t. I have nothing against it but I’m not a cosplayer. But on that particular day, I wore a Deathstroke mask and a balaclava underneath it. So my whole face was covered. I had on a hockey mask, gloves, and a heavy jacket. The point is that nobody knew I was Black, right? As I was walking around, I felt like a person because nobody knew who it was. I wasn’t a large, scary, Black guy; and I’m 6’2 so I’m not a small guy! I was just a dude walking around a convention and I wondered, ‘What if I had the mask off? Would people treat me one way, versus how they treated me with the mask on?

The second thing was that I think about a lot of the Black screenwriters and very accomplished Black men and women I know working in the business. Whether it be in video games, comics, or TV and film; and how I’ve watched people treat these very accomplished Black men and women in public. I thought to myself, ‘If they only knew that these people were probably fans of these Black people without even realizing it’. I was thinking about folks who were making things that the public absorbs and is entertained by, but when they see them they just lock their car doors, they pull their purses closer to them. They cross the street and they arm their car alarms when they see you walk by, not understanding that this person is a showrunner of a major series on NBC, ABC, or CBS. Or this person wrote a film that just grossed three-hundred million dollars globally and still climbing. They just see them as “Black, therefore negative”. So I thought to myself, ‘What would it be like for a Black hero in the DC universe who people aren’t quite sure that they’re African-American or Black or anything’? I put that concept into Shilo where even Shilo himself thinks, ‘people treat me one way with a mask off and treat me another way with a mask on’, so what is that like? What is that psychology, what does that feel like? I think I deal with that quite a bit in the mini-series The Source of Freedom.”

BNP: The way you broke down that WonderCon day, where you have yourself decked out in some gear and not being able to tell who that is under the mask. Knowing about some of the details of issue #1, you really captured the essence of that day and how you felt, in the comic, and I really can’t wait for fans to see that.

Allow Me To Reintroduce Myself

BNP: As you mentioned before, you’re redefining this character and reintroducing him to the present-day DC Comics universe. While you were planning this six-part series, what became your strategy for reintroducing Shilo Norman?

Brandon: “I wanted to ground Shiloh’s experience as an entertainer more than a hero at the beginning. I wanted to speak specifically to the fandom’s anger about race swapping or gender-swapping of so-called ‘legacy’ heroes. Scott Free, who was considered to be the Mister Miracle is not the first Mister Miracle – that would be Thaddeus Brown. If there’s any series that can organically challenge the toxicity of some fans in regards to race and gender and things of that nature in comics – Mister Miracle’s perfect. Because he is in and of itself a character who is a legacy character where one person is Mister Miracle and they give it to somebody else, then the next person is Mister Miracle. It’s not rooted in Kal-El being Superman or Bruce Wayne being Batman or Diana being Wonder Woman. I do like ‘the trinity’ as they exist, but there is an argument: that if Superman is Black or if Wonder Woman has a Black sister or [if] Bruce Wayne can be replaced by Luke Fox or whoever; it’s one of those conversations that tends to anger an element of the fan base, or a section of the fan base. With those three it’s tougher, but with Mister Miracle you can definitely approach it from handing a mantle down, so it’s much easier overall and more organic that you can talk about legacy characters and characterizations with Mister Miracle as opposed to some of the older heroes.”

BNP: In an ideal world, if you were given full autonomy and could have Shilo team up with any DC hero, who would it be?

Brandon: “That’s a good question because there’s so many people that could run along Shilo. The Question would be a great character foil for him because the Question’s a conspiracy theorist and kind of a lunatic. The Vigilante, the character from way back in the 80’s because he’s a street level hero in Metropolis. Azrael, I think would be a great foil for Mr. Miracle because one is faith based and one is super science based, so that would be a nice mix with those two.”

BNP: How do you feel about Fico Ossio’s artwork and did you two collaborate from the start or did you send him your script and tell him to do his thing?

Brandon: “I worked with Fico on another project for another company. His visual style is dynamic and energy-based but he still has that DC old-school flavor to it. He still has the DC house style encapsulated really well in his art style. I recommended him to the editorial team and they loved his work and it went from there. He did some sample artwork for the DC editorial team. They were blown away about it. I was blown away by it. Every page he’s turned in has been ABSOLUTELY AMAZING! I mean every page! You cant say that very often. I don’t know what happens when we’re done, but he’s a star. He’s rising. He’s going to be a megastar in the DC ranks.”

BNP: What can you tell us about the surprise appearance that leaves readers in a major cliffhanger?

Brandon: “I’ll just say that the person that pops up at the end, it’s a doozy. As we go through the series you’re going to get the backstory of that person and however, it relates to everything and it is going to answer a whole lot of questions while creating a whole bunch of new ones. You don’t need to have any history of the DC universe but it will help because I am going to be referencing some old stuff; but I wanted to keep it open enough so particularly newer readers who don’t know who Shiloh Norman or Mister Miracle are, they’ll be able to take a look at it and have some fun with it and enjoy going along with the ride. For those who don’t know who the character is going to be or the significance of him, they’ll just think this person’s kind of tough, whereas folks who do have a knowledge of him would be like, ‘wow I can’t believe this person is showing up’, ‘and what does this mean?’. That’s the real trick of it, is to get people to come back, and I hope they do.”

Brandon: “I want folks to know that I am not coming in here trying to rewrite DC Comics history or eliminate anybody. Although I will say Infinite Frontier, the new initiative, allows for a greater reinterpretation of events without erasing anything from the past and I think that’s the most important thing. The Tom King story still exists. All the stuff that anyone ever did in regards to Mister Miracle still exists. I’m not erasing anybody, I’m not replacing anybody. It’s just a very new interpretation on where we could go with the Shilo Norman version of it, and hopefully, I’m going to address a lot of things from the past.

I already know what the last line of the series is going to be and I think that will seal the deal. The last word spoken by Shilo will be everything that everyone needs in the last page of the book.”

Brandon Easton’s Mister Miracle: The Source of Freedom drops on May 4th with artwork by Fico Ossio and a lot of healthy hype.