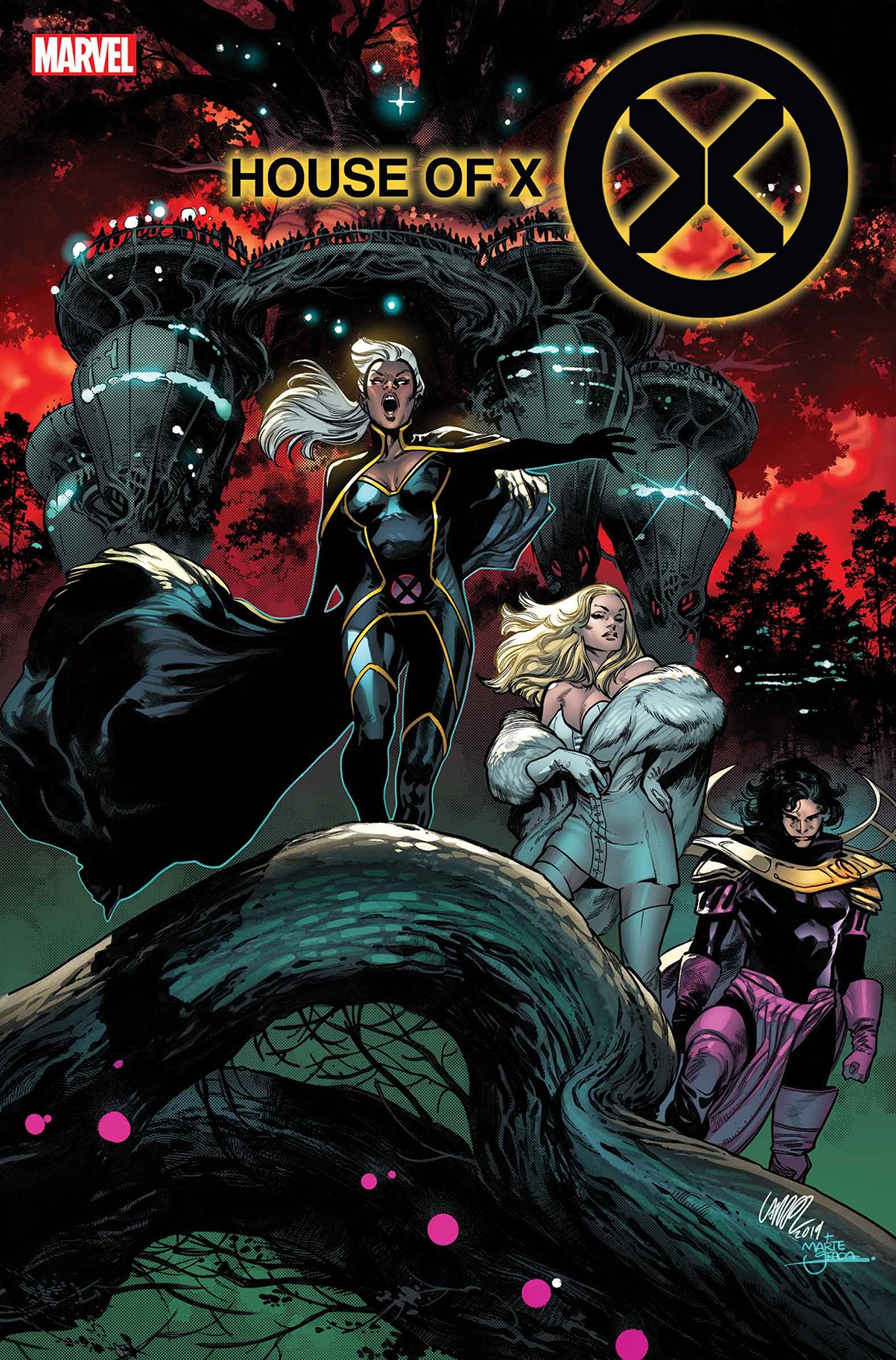 Just look at what we have made.

I hope you ate your Wheaties this morning cuz this one’s about to be a slobberknocker folks! Sitting ringside you have Jonathan Hickman, Pepe Larraz and Marte Gracia bringing this final No Holds Barred House of X issue #6 to life. We know how Charles overcomes the whole resurrection of fallen mutants task. We know how the mutants have bodied the humans into accepting Krakoa as a sovereign nation.

We know how Charles and Erik overcame their radical/methodical stances on the future if mutantkind. We know who the catalyst of all this change is, and she’s been suspiciously absent from all POX/HOX books since her canon altering debut. Now, while that doesn’t really change, we do get a Moira cameo as we wrap up this introduction to the new dawn of mutants. 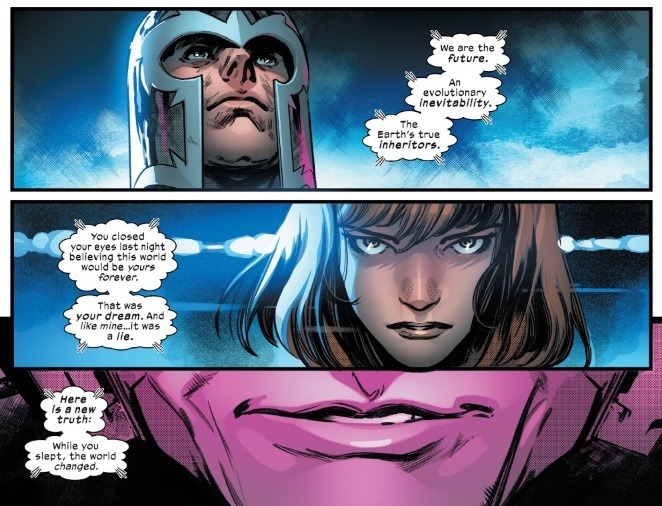 Last issue we finally saw Charles keep his promise to the mutants of Earth, no matter their past transgressions; all will be welcomed on Krakoa, and issued a clean slate as long as they pledge themselves to the future of their species. The likes of Apocalypse and Exodus roll up to the spot looking like Deebo and The Candyman turning cats to shook ones. But it’s another villain that absolutely steals the show once again. Ladies and gents, how is Mister Sinister this well written?! Every. Single. Time. This man is on a page I am chomping at the bit! I’ve always thought he was a ridiculous, over the big top circus type of character but now?? I love everything coming out of his outlandish mouth. Kinda reminds me of Cam from Modern Family.

Those three villains are but a small corner of the thirteen member Quiet Council of Krakoa. The rest of the governing body of Kroakoa rounds out with some names you’d expect and others that may come as a surprise. We already knew Emma Frost and Shaw would be made men and women, after she finessed that meeting between Charles and Magneto in last week’s Powers of X, but it’s that mystery Red King slot that will have everyone buzzing (It’s an obvious pick, but all my money’s on Omega Red). 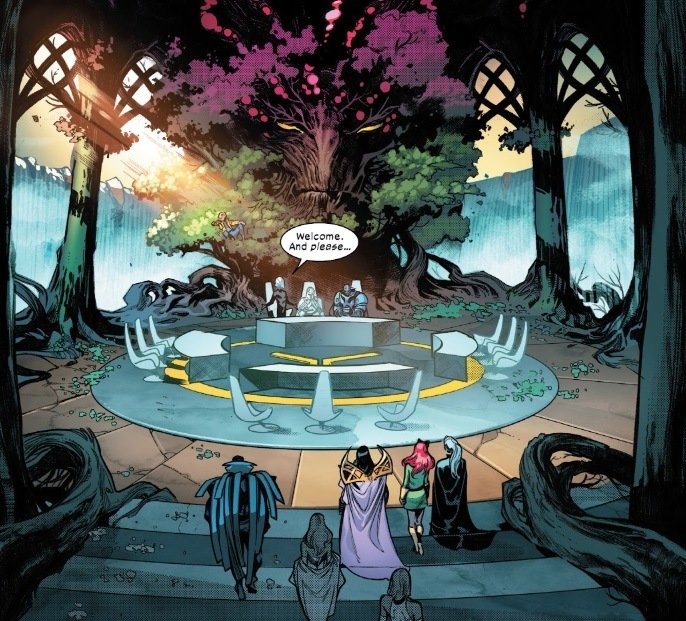 We have X-Men who are no brainers like Storm and Jean Grey, but then there’s the likes of Mystique and Nightcrawler that make you proud as a fan, but surprised when thinking about the grand scheme of things. No Beast? No Cyclops? No sign of Moira anywhere. I got questions…

With the formation of the Quiet Council come the problems you inherit whilst ruling a nation. The implications of their decisions will be felt well beyond this or the upcoming issue of POX #6, which will finalize Hickman’s masterpiece of X-Lit. Killing, property, and reproduction are at the top of the council’s priority list. After some choice rationale on humans not being able to come back from the dead, Krakoa getting that respect put on it’s name and a few unexpected holy words of encouragement, Hickman lays out the first 3 laws quite bluntly: 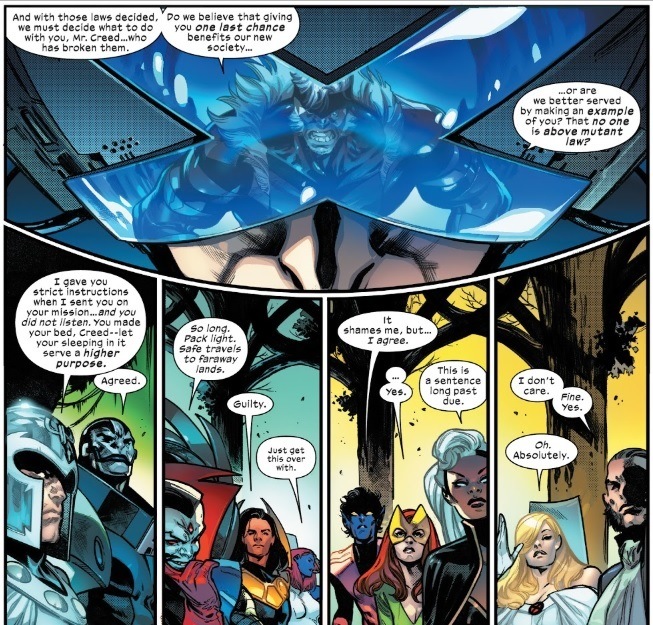 The Sabertooth “judgement”, as Nightcrawler called it, was most exciting episode of Law and Order I’ve ever seen! I had no clue they would actually circle back on this mission they gave him, where Graydon Creed clearly disobeyed orders and now stands in judgement by the legends of this Krakoan roundtable. Honestly though, while they debated and came to a conclusion on the first ever mutant trial, by mutant against mutant, the artistry is what got me. As the verdict is handed down, you’re literally and figuratively pulled into the visual allure of this book. Krakoa is not only the most sacred Eden the mutants could have asked but but it is also the executioner of all sentenced to stasis without life or death. A grisly fate for all who disobey the 3 non-negotiables. There’s always a chance for redemption though..

As we end with a glorious final panel of Charles and Erik standing side by side, staring into the celebratory skies of fireworks and jubilation, feelings of triumph and pride are bound to wash over you. Eventually you’ll lean back in your seat and let new thoughts settle in. You’ll think about the Phalanx and how that far gone future that ends in Ascension in some eyes, but complete annihilation in the eyes of others.

You’ll think about Mars and the well-intentioned breeding pits that will inevitably descend into madness. You’ll think about the Marauders and the Savage Lands and how these people and places will tell so many stories in the twilight of mutant supremacy. You may even think of Hickman’s Avengers/New Avengers/Infinity/Time Runs Out/Secret Wars run and the glaring parallels between these distinctive tales. Ohhh House of X will make you think! 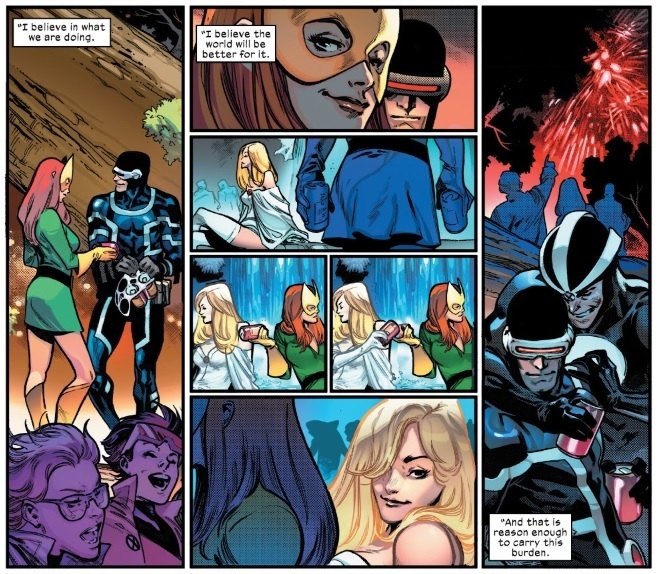 Larraz and Gracia brought their style, passion and bravado each and every issue, and can be thanked nearly as much as Hickman for blessing us with this righted path for the X-Men. What more needs to be said about Hickman? Is there any obscure character he’s unable to turn into sheer greatness? Will we find out if this is Moira’s final life or if she has one more left in her? Will the Dawn of X titles live up to their predecessor? Fallen Angels, Excalibur, Marauders, New Mutants, X-Force, and the flagship X-Men all drop in October and November. You already know we’ll be back to cover some (maybe all) of those.