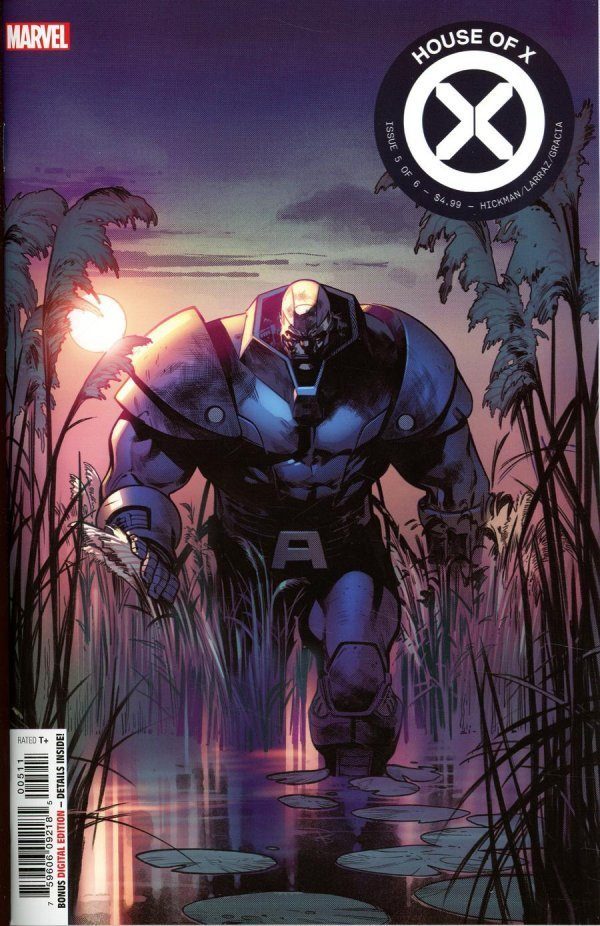 Do you want to know the read difference between them and us?

Until now, we were never given a chance

After that deliciously hammy Powers of X issue #4, we now know lots of things. We know how the relationship between Charles and Krakoa developed. We know how the mutants are able to decipher the cryptic language for everyone’s benefit — Thanks Doug Ramsey! And we’ve learned tons about Mister Sinister’s cloning and genetics research. But it wasn’t until last week that we finally got our first extensive look at the maniacal, caped criminal sporting thousands of clones of himself. This week’s House of X ties into all that knowledge while also building on the themes of death, creation and resurrection.

I’ve already given mad love to Jonathan Hickman’s ability to utilize exactly who or what he needs from a particular comic book’s history, in order to suit the needs of his current book. After flexing the Moira MacTaggert reincarnation angle, he five ups himself. Just like that, five of the most unexpected mutants are now the cornerstone of future mutantkind because they have the collective power of resurrection. Our favorite mutants were violently murdered and sacrificed in grand solar fashion in House of X #4, and now all questions of how they will be resurrected have been answered. (We all knew they’d be back. They always come back.) 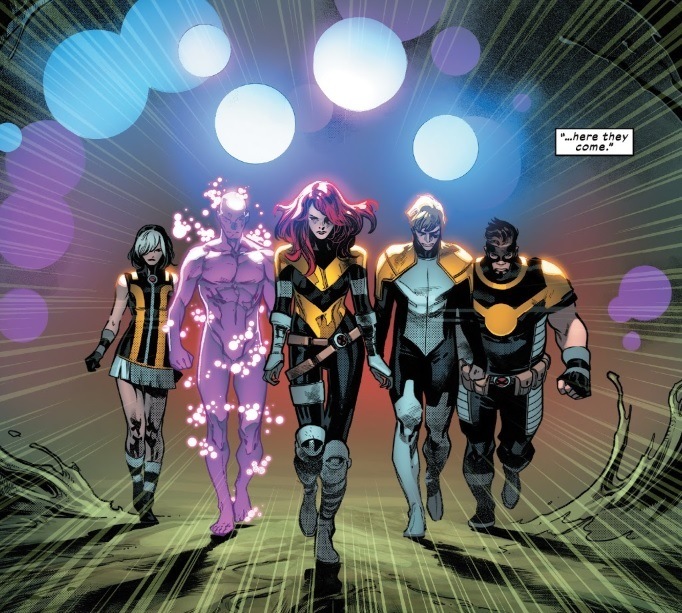 The powers of the mythical-looking crew rolling up on Magneto and Polaris in the opening pages can bring forth the long awaited reason we’ll be seeing Cyclops and company in many a Marvel books in the future. Fabio Medina aka Goldballs aka one of the most worthless sounding mutants that I’ve ever had to Google (he only came on the scene like 5 years ago so I don’t know this mans) turns out to be one of the top 10 most important X-Men alive. Those golden balls he’s so used to flinging at villains are actually eggs.

After Goldballs produces one of these eggs, Kevin MacTaggert aka Proteus with the power to warp reality, makes the contents of those eggs viable for life. After being injected with DNA that they’re clearly getting from Sinister (or that was willingly given up before the Orchis mission), Joshua Foley aka Elixir steps in to do his thing. Elixir molds a husk of the deceased X-Hero using his power to kickstart the cellular replication process and essentially create a body for the wielder of time to incubate said husk. Eva Bell aka Tempus matures these husks to the mutant’s optimal age of strength and peak superpower.

But none of this would be possible without the the help of the great unifier, Hope Summers. Her abilities to psychically link and bond mutants, combined with being able to duplicate or enhance the powers of those near her, in their most effective form make The Five an incredible team to behold. Hickman knew exactly what he was doing when he signed on to rewrite X-Men history, and seeing it all unfold has been nearly as rewarding as his Avengers/New Avengers/Infinity run…and it’s only been like 9 issues.

The beauty and the detail of the artwork is equally inspiring. Pepe Larraz and Marte Gracia’s resurrection scenes jump out and grab ahold of you. You know you’re seeing panels with wild depth and force your self to pause and take in every crevice of the page. 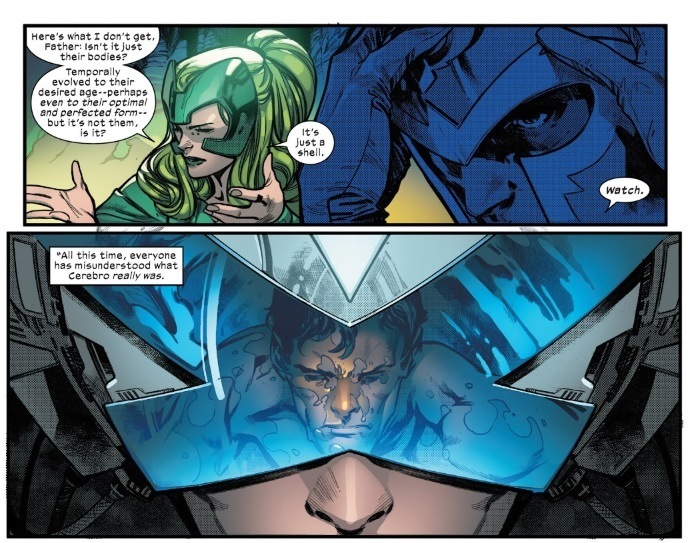 To polish off the resurrection, Hickman drops another bomb. Everyone got it wrong with Cerebro. He basically says, tracking down mutants is old news. Cerebro’s primary function is to “download” mutant minds, souls, memories and overall beings so that one day Charles will be able to command/ctrl+V their mind back into the reanimated shell of a mutant. It’s a lot. It’s genius. And that was just the first act..

Are you worried? Not today

So boom. Storm out here atop the tree of life being the ’96 bulls lineup announcer for everybody at Club Krakoa. Just when I thought it would be all hype, there’s this moment where Storm and Cyclops give props to each others leadership — that ish was touching as hell! The Five have regrown and given life to the 7 heroes of Krakoa that gave theirs to stop Nimrod from going online. As they bask in the glory, I damn near shed a tear.

Sidebar: What is it that gives Magneto pause when watching Storm fanatically hype the crowd up in the name of MUTANT? Is it the numerous futures that he has seen, where this all goes to death and destruction? Is it the impending UN Vote and the potential ramifications of a no decision? Only time will tell. 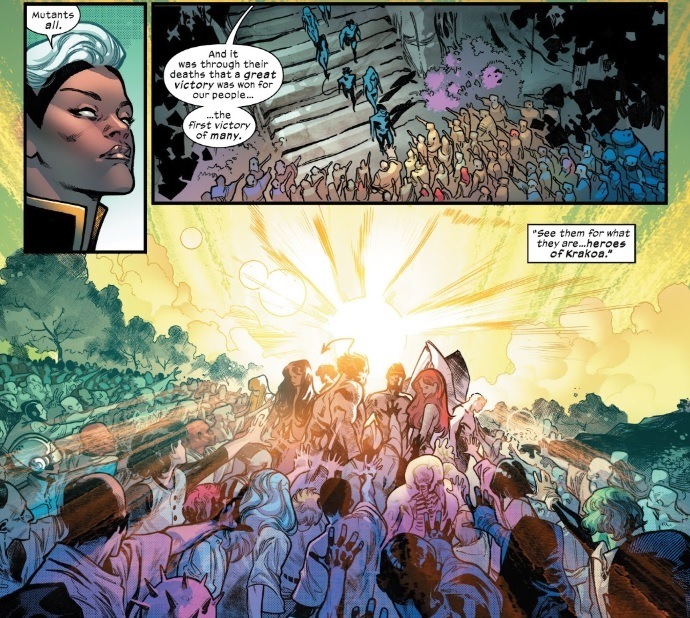 The remainder of the issue shakes out as a telling sign of things to come, but that’s not why you’re here. The tea is all about the small nation of Wakanda slowly peeling off the white glove and slapping Professor X across the face with a vehement “NAH” in the form of a simply stated “THEY DO NOT NEED MUTANT DRUGS”. It’s a testament to Wakandan technological advances allowing them to be completely void of external forces and assistance, and Shuri being ready for the static. We finish off with the arrival of some heavy hitters. Up until now we’ve seen familiar and friendly faces enter the Krokoan safe haven, but it isn’t until now that the likes of Apocalypse, Mister Sinister, and Exodus roll up looking menacing. Necessary, menacing allies.

The last thing I want to mention is a brief note at the end of ‘The Mind’ section of the ‘Resurrection’ data page. It states “NOTE: There has been no experimentation regarding what happens when you combine a mutant MIND with a HUSK that is not their own” and this just screams lies or foreshadowing to me. Can’t wait til this one comes full circle.

9.5 Opportunities to Change out of 10