One of my favorite phenomena is when a lesser-known piece of pop culture manages to organically grow from obscurity. Perhaps it’s a love for rags-to-riches stories, applying its gratification to the creation of that story itself: success comes modestly, over time, from word of mouth instead of blockbuster marketing budgets with ubiquitous ads and paid reviews, until something like Schitt’s Creek is so common a household name that you forget it was once a quirky, niche show on an unknown Canadian network. That level of gratification can apply to Netflix’s The Prom–a Broadway musical-turned-movie that went from a disappointingly short theater run to one of the most start-studded movies of the year.

The Prom is a Faithful Adaptation

Adaptation reviews can be tricky, to the point of needing a logic map to determine whether the movie is right for you. Did you watch the original Broadway show? If yes, take one path; if no, take another. Do you typically enjoy musicals? Do you love the soundtrack? Have it memorized? There’s a lot to fuss through depending where you stand, and I’ll cover those details in a moment, but for transparency, my answers are yes, yes, yes, and yes.

If you’re curious the extent The Prom stays true to the Broadway production, the answer is that the adaptation changes very little. If you memorized the soundtrack, you can sing along through each tune with only minor edits to some of the harsher language and pared down versions of “The Acceptance Song” (an acceptable shortening) and “You Happened” (an injustice, but more on that later).

On one side, The Prom is about a teen girl named Emma (Jo Ellen Pellman) and her Indiana town that is outraged at Emma inviting another girl as her date to the high school prom. The head of the PTA, Ms. Greene (Kerry Washington) is the most upset and wants to cancel the prom altogether. The rub is that her daughter, Alyssa, is Emma’s secret lesbian date.

On the other side of The Prom, though, are Broadway stars–led by Dee Dee Allen (Meryl Streep) and Barry Glickman (James Corden)–who find out about Emma’s scandal and resolve themselves to stand against the injustice on Emma’s behalf. Their motivations are born out of self-interest after their latest musical tanks and critics lambast them for being the unlikeable narcissists they are. The actors’ solution is a simple one: They would find a cause to support, and, by putting their names on something bigger than themselves, prove they aren’t narcissists. Their lack of self-awareness is an ongoing jab at the wealthy East coast liberal elite; the type who can preach tolerance while being woefully blind to their own intolerance.

Between Emma, Alyssa, Dee Dee, and Barry, there’s limited real estate for telling the stories of its jam-packed cast, making for a Tetris-type puzzle for director Ryan Murphy in adapting a 3-hour production into a 2-ish hour movie. Dee Dee and Barry receive the lion’s share of the attention–an understandable direction given the star power of the actors attached–and both benefit from their stories staying mostly true to their original depictions. Whether you know the story or not, you can likely predict their character arcs as their originally manipulative antics become a genuine interest in helping others.

Where the puzzle reveals fuller stories for them, both Emma and Alyssa carry the holes from The Prom‘s missing pieces. (Other characters, like Nicole Kidman’s Angie, exist more for Kidman’s star power than a needed character in this adaptation.) Emma strikes the wrong tone in “Just Breathe” and “It’s Not About Me,” smiling and oddly hopeful where she should be hopeless and mortified. This is one of the bigger missteps of Murphy’s direction, despite actor Jo Ellen Pellman having the right idea originally before her instincts were directed away and into the gutter. Emma’s perpetual happiness in the first act undermines her stressful situation: she’s a gay girl in a town that doesn’t accept gay people, in a school where she’s bullied, as she dates a closeted girl whose mother causes her public humiliation.

In the movie, Emma’s perpetual and genuine optimism lands as doofy, giving her a Kimmy Schmidt-type feel where it doesn’t belong. Without Emma’s trepidation, the tension of her heartbreak is dependent on her conversations with Barry, which only work well enough if you’re forgiving. It falls short of what could’ve been if Emma was more a well-rounded person than the clichéd, bright-eyed, overly optimistic small-town girl.

The bigger loss, though, is Alyssa Greene. Minus her verse in “You Happened,” Alyssa’s development comes too little and too late. For the uninitiated, it’s in that song that Alyssa sings her promise to Emma about embracing their point of no return when she would come out as gay. In “You Happened,” Alyssa acknowledges her struggle with being honest with herself about being gay. Taking away Emma and Alyssa’s moments in “You Happened” strips away the chemistry between the two of them. It’s only by seeing their joy in the good times that we can feel their loss when Alyssa falls short of her end of their pact.

Still, The Prom hits enough notes—both musical and emotional–to land in a good place and avoid some of the pitfalls that would have sabotaged the film altogether. The age gap between Meryl Streep and Keegan-Michael Key risked making their romance an awkward one, but Streep’s Dee Dee is convincing as a woman who’s likely landed even younger men. And Keegan-Michael Key’s Principal Hawkins succeeds in adding touches of humor through subtle ad-libs under Dee Dee’s bombast. After “The Lady’s Improving,” their love solidifies as the Black principal teaches the narcissistic white woman how to be a good person, which, after The Good Place, is about one script away from landing its own trope name.

I struggled with watching James Corden’s Barry Glickman, given that he stayed true to playing an exaggeratedly flamboyant gay character despite being a straight actor. Of course, portraying such a character risks tipping over from acting into offensive parody, and each audience member can determine where they sit with that. What I will say is that Glickman’s character has a deeper sincerity with the openly gay stage actor Brooks Ashmanskas, who sings of the character’s pride in who he is. I found myself grateful for the abbreviated “Acceptance Song,” as to not see Corden twirling, prancing, and frolicking as he repeats to “accept me” for being gay.

Where The Prom succeeds best, though, is that it lands the feel-good sincerity built into musical teen dramas where, as described in “We Look to You,” a song solves a problem. Its success lies in its intentional and self-aware earnestness, down to the ending number that challenges viewers to imagine “how the world could one day be; it might come true if we take a chance.” Is it campy? Absolutely. The Prom is heartfelt movie candy. And if you let it, it’ll make you feel good and challenge you to risk being hopeful for a better world with better people. And in a world where cynicism is currency, I can admire the bravery in its message, and the fun in its delivery.

Did I enjoy The Prom? Overall, yes, I couldn’t help but enjoy it for its proximity to its source material. Would I recommend it? No, except if you love the theater production…in which case you were going to watch–and enjoy–it anyway. 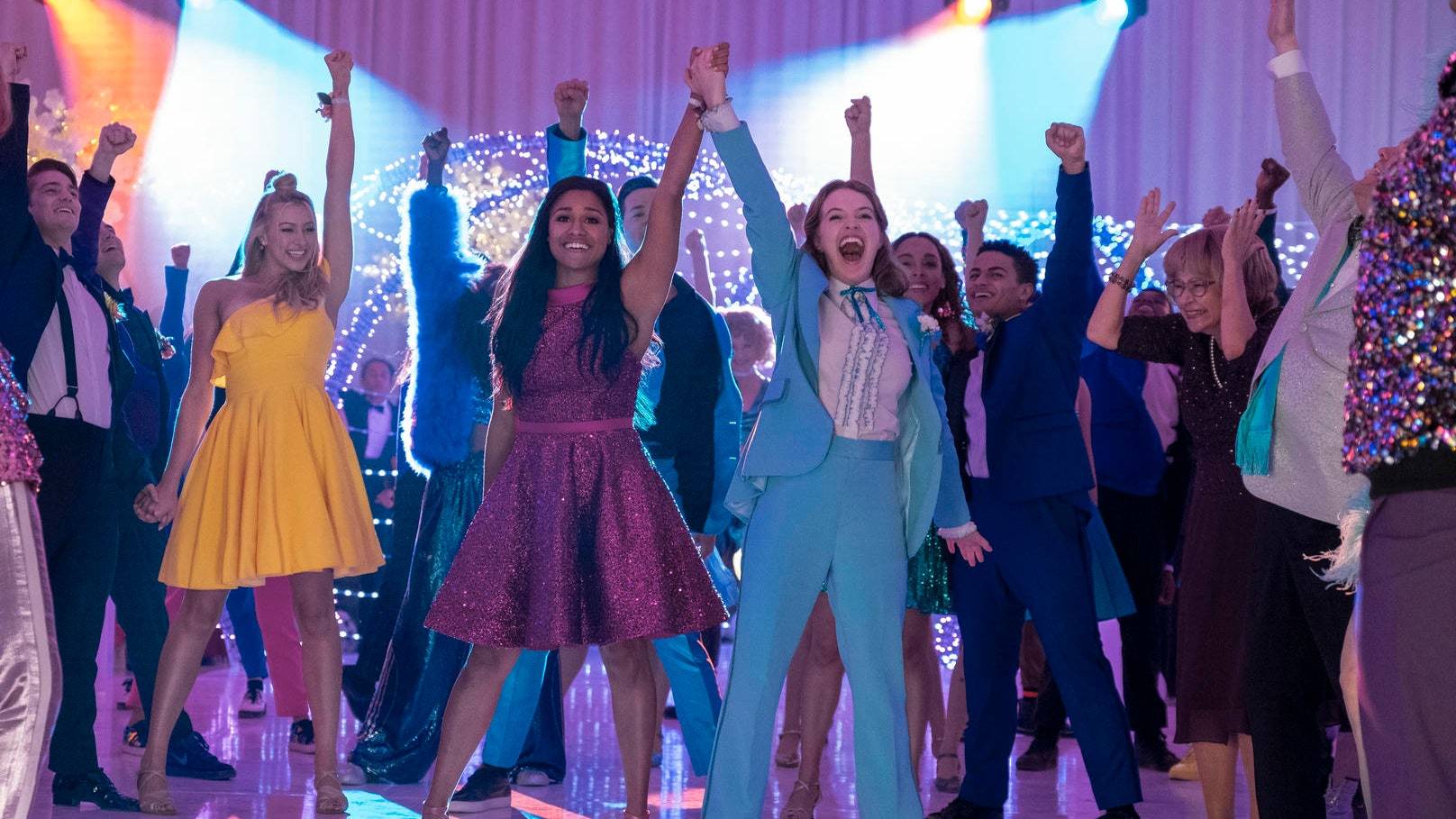