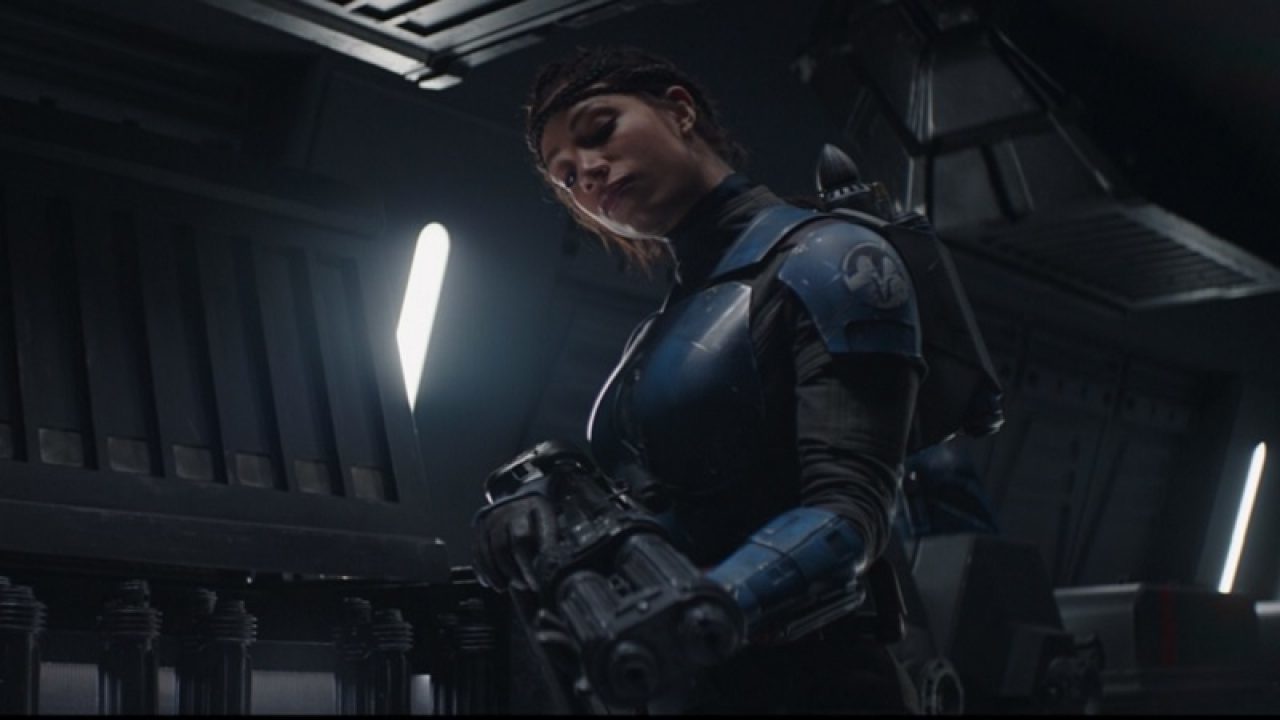 First of all, spoilers below.

We’re talking about The Mandalorian, and the season’s over, so if you haven’t watched…. You’ve been warned, don’t read this, run to watch the finale, and then run back here to read this. That being said… let’s talk about what I thought was the best scene of the series.

Listen, I get it, some of you are awed by Luke, were giddy over the presence of the Darksaber, others were hype to see Ahsoka, couldn’t wait to see Seth Bullock yet again get to be a marshal. And while those were all good scenes, if you think one of those were the best, you’re a kyber crystal short of a saber. Because none of those scenes involves shit talking Mandalorians going straight for each other’s soft spots.

We know at least one thing about Mandalore, #1 the sun must never shine, because Mandalorians are used to fighting IN THE SHADEEEEEE. Also, the Hip-Hop scene must be nuts because the only thing missing from this episode of Wild’n Out was for Loaded Lux to come stepping around the corner of the cantina to get in the cypher.

Listen, the scene is short but there’s levels and layers to it. First off, it seems like the start of a Imperial Dad joke, 2 bounty hunters walk into a bar. But Din Djarin, was there on business, and Boba was rolling shotgun. I’m guessing Fennec Shand figured she wasn’t getting paid to get in the middle of a tag team Mando match and sat in the ship being all mercenarial and ish.  Anywho Din Djarin, goes looking for Bo-Katan & Crew asking for help to retrieve Grogu.

Bo-Katan hit him with the “Naw” you never seeing that kid again. Boba says we don’t need these two, and I swear I heard a bell ring, because that’s when the match started. Immediately you see the glimmer of recognition in Bo-Katan eyes as she hears Boba’s voice, and she starts off the Freestyle Battle with “You’re not a Mandalorian.” Translation: Why is he even here right now? Boba says something else, and Koska steps to the mic like it was a high school battle cypher and someone walked in with fake Jordan’s on. She says, “I didn’t know sidekicks were allowed to talk.” Translation “WHOSE MANS IS THIS??” I wasn’t ready for the verbal warplay, and the tension was thicker than bantha hide.

Boba says something mildly slick in return, and Koska stands up, slow walks up to Boba with big Chris Partlow energy, looks him up and down and slowly says, “You’ll be talking through the windows of a bacta tank.”

This phrase is #Bars. 2020 hasn’t given us much, but it has given us The Mandalorian. That “PUNKS JUMP UP TO GET BEAT DOWN” energy that I didn’t even know I needed. That line told me, that Hip-Hop is popping off somewhere in a Galaxy far far away. Because “You’ll be talking through the windows of a bacta tank” is clearly the line off some battle rap between a Wookie and a Hutt wanna be. It’s the title track off the debut album South Side of Coruscant. It’s as gangsta as a Shock Trooper with a teardrop tattoo.

There’s levels to this line. First and foremost, Koska is telling Boba “Imma whup yo ass.” I’m not gonna kill you, no, no, no…that’s too easy. But Imma beat that ass bad enough that you’re going to need more than a medical droid. You’re gonna need deep tissue healing; that “I lost a limb fighting my father” healing, that “I spent a night on Hoth and damn near froze to death” healing, that “I got both my legs cut off by Obi-Wan and I slid into a puddle of lava” type healing. But best believe I’m going to leave you alive so that you will always know, that “I’m the one who did this to you Remember me.” Koska delivered the line so smooth and casual I was waiting for her to follow up with. “It’s the one that says bad mother f*cker on it.” My immediate reaction after that line was:

I am anxiously awaiting the moment in real life when I can use that line in context. BUT THAT WASN’T THE END. The bars were still coming and the 808 hadn’t even dropped yet. Boba was like…Mandalore? It’s a run-down hole in the ground. Bo-Katan took offence and told him he was a disgrace to his armor, which to him was talking about his dad, which is really like talking about someone else’s momma, but you can’t really use momma jokes on clones sooooo… Boba tells Bo-Katan that the armor belong to his father and Bo hits him with the “don’t you mean your donor?”

YOOOOOOOOOOOOOOOOOOOOOOOOOOO…. did she just call Boba Fett, the Carbonite casing, Hutt Hitting, baron of bounty hunting and first of his name, a test tube baby? We roasting people in space son? We playing the dozens out here on the Outer Rim? But she didn’t stop there, she went from zero to Sith so ruthlessly that Maul would have been proud. Bo-Katan hit Fett with a two piece and a biscuit, following up that first verbal haymaker with “You are a clone, I’ve heard your voice thousands of times.”

Bruh. She said it with a smile.

Even the unsaid was bad… I’ve heard your voice thousands of times equals I’ve killed your voice thousands of times. Yo! You don’t know Bo. Bo got no cut cards. Bo looks at you, sees you hit rock bottom, throws you a shovel, and says keep digging. Bo hit Boba, like Bo hit Brian Bosworth, and it was just as brutal. The rest of the scene was a solid, quick little fight scene with the first ever jet fueled, interstellar, tornado DDT, letting us know that not only is Hip-Hop in Star Wars, but luchadores exist as well.

And what better way to end off a series? Y’all can have your Luke Skywalker cameos and your Moff Gideon beat downs, give me an interstellar versus battle between two bounty hunters and a pair of bad ass Mandalorians, and I will sip on that like it’s a pint of spotchka fresh from the krill farm. This whole scene was the reason Boba went to Tatooine in the end credits with an attitude problem. That Beskar armor can fend off lightsabers, but it can’t shield you from them internal verbal wounds. Fett needs to spend the first two episodes of next season talking to a counselor. He needs to hit the couch à la Tony Soprano. He got some issues to unwind.

Me, on the other hand, I’ll be busy. Busy looking for anyone foolish enough to step up, so I can make them talk to me…through the windows of a bacta tank. #BARS!