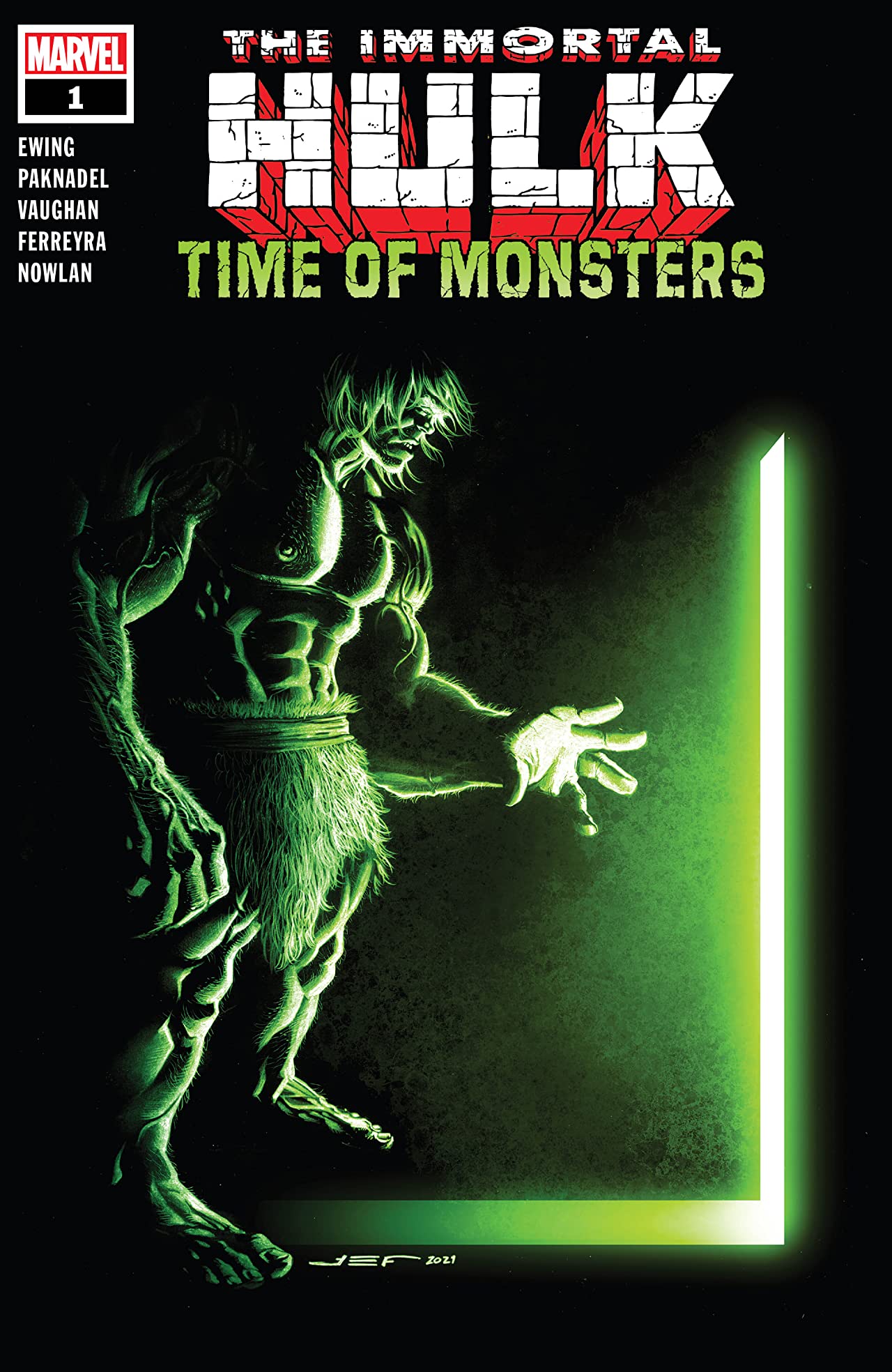 There are plenty of things in comics that are most definitely my shit. Legacy characters, anything Spider-Man related and one-shots. So here we are with a brand new one-shot for Immortal Hulk from Al Ewing, Alex Paknadel, and David Vaughan. If you’ve read my reviews, you know I’m a sucka for all things Immortal Hulk. In Immortal Hulk: Time of Monsters #1, Ewing and Paknadel team up to further build the Hulk mythos introduced in the Immortal Hulk series. This time around there are some interesting revelations about all things gamma.

Immortal Hulk: Time of Monsters #1 is split into two stories. The first takes us back to the primal age, thousands of years before Banner’s Hulk ever destroyed his first tank. It’s a gruesome story filled with desperation, horrifying images, and the influence of The One Below All. The second is more of a classic Hulk story that feels like something straight from the beginning of Immortal Hulk where Hulk acted as a force punishing bad guys for their sins.

The main attraction is definitely the first story. This prehistoric tale feels like it would have fit right into Jason Aaron’s Avengers of 1,000,000 B.C.. Like many of these retcons go, we see that Bruce Banner is not the first Hulk. Nope. More than 12,000 years ago, a gamma-irradiated rock and a misplaced human sacrifice created the Hulk of 9,500 BCE. A gruesome creature, this first Hulk is filled with a sadistic sense of vengeance and hate. It’s quite a fascinating look at the origins of The Green Door and Gamma Hell, that I think fans of the series will get a kick out of.

The second story of this one-shot pits the Hulk against Scarecrow and honestly, I can’t even remember the last time Marvel used their version of the Scarecrow. The strength of the first story kind of overshadows this one, but there is still plenty to enjoy. For one, Scarecrow makes a great villain, but Hulk makes a better-twisted hero. The deviousness of the Devil Hulk is always fun to read.

Both Juan Ferreya and Kevin Nowlan do a great job of setting the tone for their respective stories. The art in the ‘Time of Monsters’ story is reminiscent of great paintings, fitting the time period and bringing out the horror elements of the tale. Meanwhile, the classic nature of the backup story ‘A Little Fire’ gives the best of comic book storytelling. Immortal Hulk: Time of Monsters is a great addition to Ewing’s Hulk lore and reminds me that I’m going to miss this series when it’s gone.