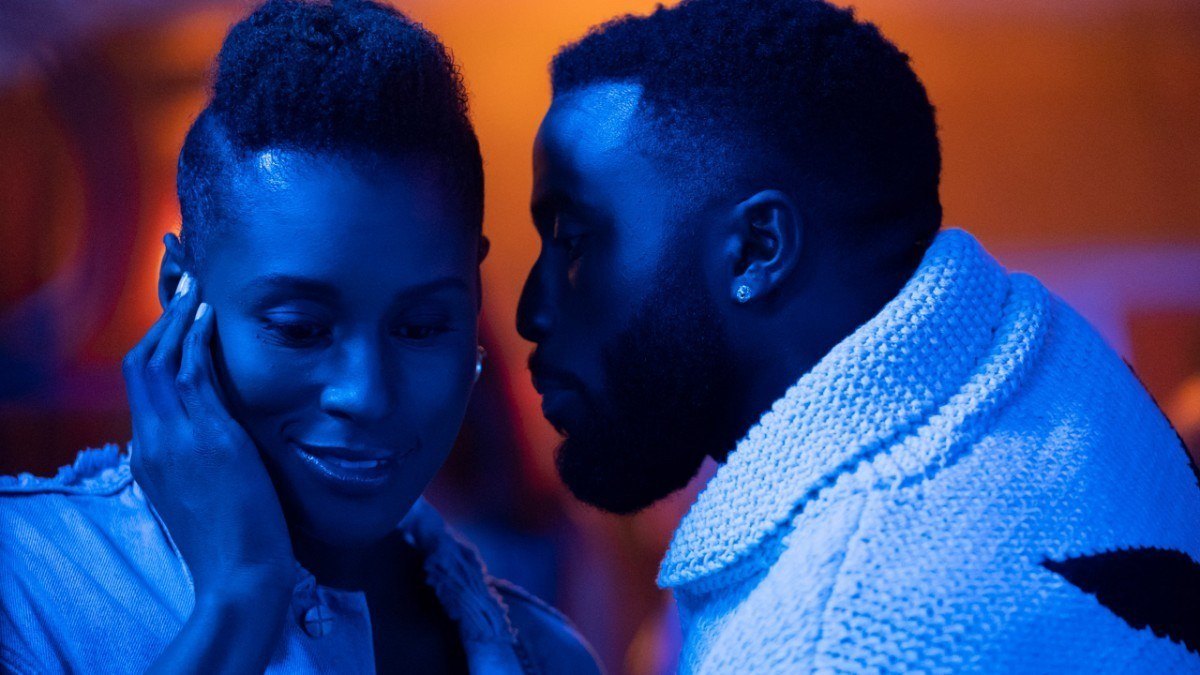 Wowee! We kick off our second episode of this season with Issa at work. Seems Daniel’s been ghost since their last exchange, so she shoots him a text to make sure he’s alive and shit. In the meantime, she gets an email rejecting her for an apartment she’s applied to. Daniel hits her back that he’s fine, and she’s gotta decide how she feels about that. But since she doesn’t have anywhere else to live, she should definitely be nice.

Even though Issa’s boss Joanne shut her down with the quickness when she surfaced some of the reasons schools don’t want to fuck with We Got Y’all, Joanne is now willing to entertain’ redesigning their racist-ass logo. The rest of the staff points out that a white hand holding some Black kids isn’t a good look, and Sarah even calls out the organization’s name–“We Got Y’All” as a problem. (It is grammatically incorrect, after all.) Joanne’s still defensive af, though, talking about how it couldn’t be racist because it’s her hand–and it’s “not a handout, a hand out.” Whatever, girl. Finally, Patricia pitches Issa as The Black Voice of Record, saying they should probably just do whatever she suggests. But things with Joanne are already tense, and Issa’s bitter about the newly woke staff thinking they can rely on the sole Black employee to clean up their mess. She tells them they’ve all made good points and doesn’t offer her own opinion. In the meantime, she gets another rejection for an apartment.

Daniel’s in the studio with his little niece playing a new track for her. But she’s asking for some booty-shaking music because his music makes her think, and “sometimes I just wanna be ratchet.” I see you, kid.

In the meantime, Daniel’s still trying to hook up with this artist, Spider, he wants to work with, but his friend Seven always has some new excuse for why he can’t show up. Seven promises he’ll introduce them tonight at Fais Do Do.

Issa goes to visit Kelli for advice about finding an apartment. Turns out her credit score is 425, about as bad as it can be. Kelli breaks it to Issa that the only way she’s going to get an apartment in Los Angeles at this point is if she finds a cosigner (and no, Kelli ain’t doing it). Otherwise, she needs a bunch of saving so that she can pay three or four months’ rent in advance. Yeah, not so much. Then Kelli asks Issa what she’s doing to get a free couch at Daniel’s. “You concubinin’?” Nope. And she’s not cooking or cleaning or doing much else either, just taking up space and being in her feelings when he’s in the next room putting in work.

Issa reaches out to her brother to see if staying with him might be an option after all, but sounds like he and his boyfriend have started growing weed in her room. So that’s a no.

We find out where Daniel’s been spending his time instead of his own house. He’s spent three nights in a row at booty call Vanessa’s place, and even she’s calling that out as weird. Though she makes a comment about Issa being at his place all the time, mostly she seems curious about why he’s still at her house. She’s also a little bit siddity and a little bit vapid, but at least she has her own couch to sleep on. When he mentions the club he’s going to tonight, she dismisses it and says it’s too “thuggish.” Then she gets all excited about some high yellow celebrities’ social media romance–“I love light-skinned love.” Okay, girl.

Issa brings a peanut butter and jelly sandwich to lunch with her coworkers because she can’t afford shit else. Frieda brings up the earlier discussion about the We Got Y’all logo, and Issa points out that’s only one of the problems. Ken and Kitty remind her she didn’t say anything in that meeting, so why complain now? Issa doesn’t want to play the role of the Angry Black, but they tell her that’s the way things are. The onus is on her to speak up about Blackness the same way they have to cape for queerness and white feminism.

Issa calls Daniel to tell him she’s making a Costco run and to also to say her housing sitch isn’t looking to improve anytime soon. She asks if she can stay a couple weeks longer. He tells her Vanessa isn’t cool with her being there, which isn’t really what Vanessa said, and tells her she can just have one more week. Then he hangs up on her. Well, damn, Daniel.

Issa finally has a meeting with Joanne to talk about We Got Y’all and what it could do better as an organization. One thing she points out is that, except for herself, the staff doesn’t exactly look like the Black and Brown kids they service and could use a little more color. Joanne tries to drag Sarah into the fray here but can’t actually think of what Sarah is other than not-white. Yeah… 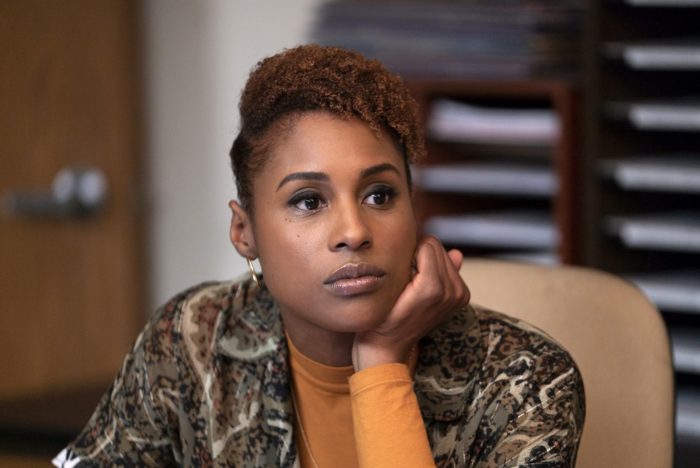 Taking Kelly’s advice, Issa decides to pitch in and clean Daniel’s kitchen, or tries to, when not freaking out over a dead spider behind the toaster. Daniel seems appreciative, but he’s also distracted because Seven is once again bailing on making an intro to Spider. Issa tells him he should just go to the club and introduce himself to Spider, but he doesn’t want to go by himself. She offers to come with so he’s not rolling solo.

They get to the club, and Daniel’s salty because he’s not on the list like Seven said he would be. Luckily, Khalil, their friend from high school who’s been hitting it big, gets them in. Daniel finally tells Issa why he wants to meet Spider so badly, what he thinks he can do for him musically. He talks about instrumentation and starts beatboxing into her ear… and, yep, now there’s that sexy tension again.

Issa excuses herself to go get them drinks even though she can’t really afford it. Some dude at the bar with green braces (to match his money, he says) offers to get her a drink, and she manages to snag an extra for Daniel. Issa is trying to pump Daniel up a bit to go introduce himself to Spider: “You got this.” Daniel downs his bourbon and they head to VIP. But just as they get to the table, Khalil is there, too. Issa says hi and starts chattin’ him up about his kid, trying to make space for Daniel to talk to Spider, but dude just doesn’t seem interested in Daniel as a potential producer. Khalil tells him he should swing by his studio, though, and play him what he’s been working on. But Daniel is acting too prideful to take him up on the offer. 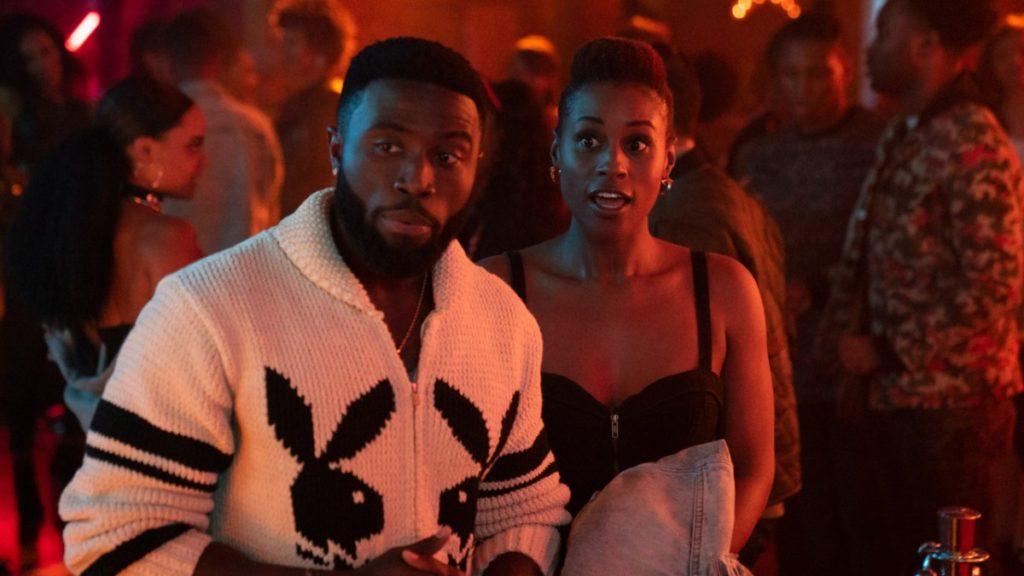 No, seriously. Next thing they all know, a fight gets out of hand, and someone starts shooting in the club. Daniel and Issa break out and head to a late-night burger spot. He finally opens up about how he’s feeling defeated while watching other people make it. “I got good, Khalil got famous.” She suggests he try working with him, even though she knows it’s hard asking for help. Maybe this shared vulnerability makes him open up a bit; he tells Issa she can stay as long as she needs, he likes her being around. All of a sudden, Vanessa isn’t a problem anymore.

When they get back to his house, Daniel calls Khalil and asks about coming by his studio at some point to play him his tracks. Good start, Daniel.

Issa’s trying to get comfy on the couch, but it’s a couch. Daniel rubs her neck a bit and then offers her his bed, says he’ll be working late anyway. Damn, Iss. Get it in. Turns out she’s got a voicemail about a property management position, which means her housing situation may be looking up, but she doesn’t tell Daniel, just sits next to him while he plays the latest track he’s been working on.

So, Issa and Daniel are getting chummy again. How chummy? Guess we’ll find out next week.