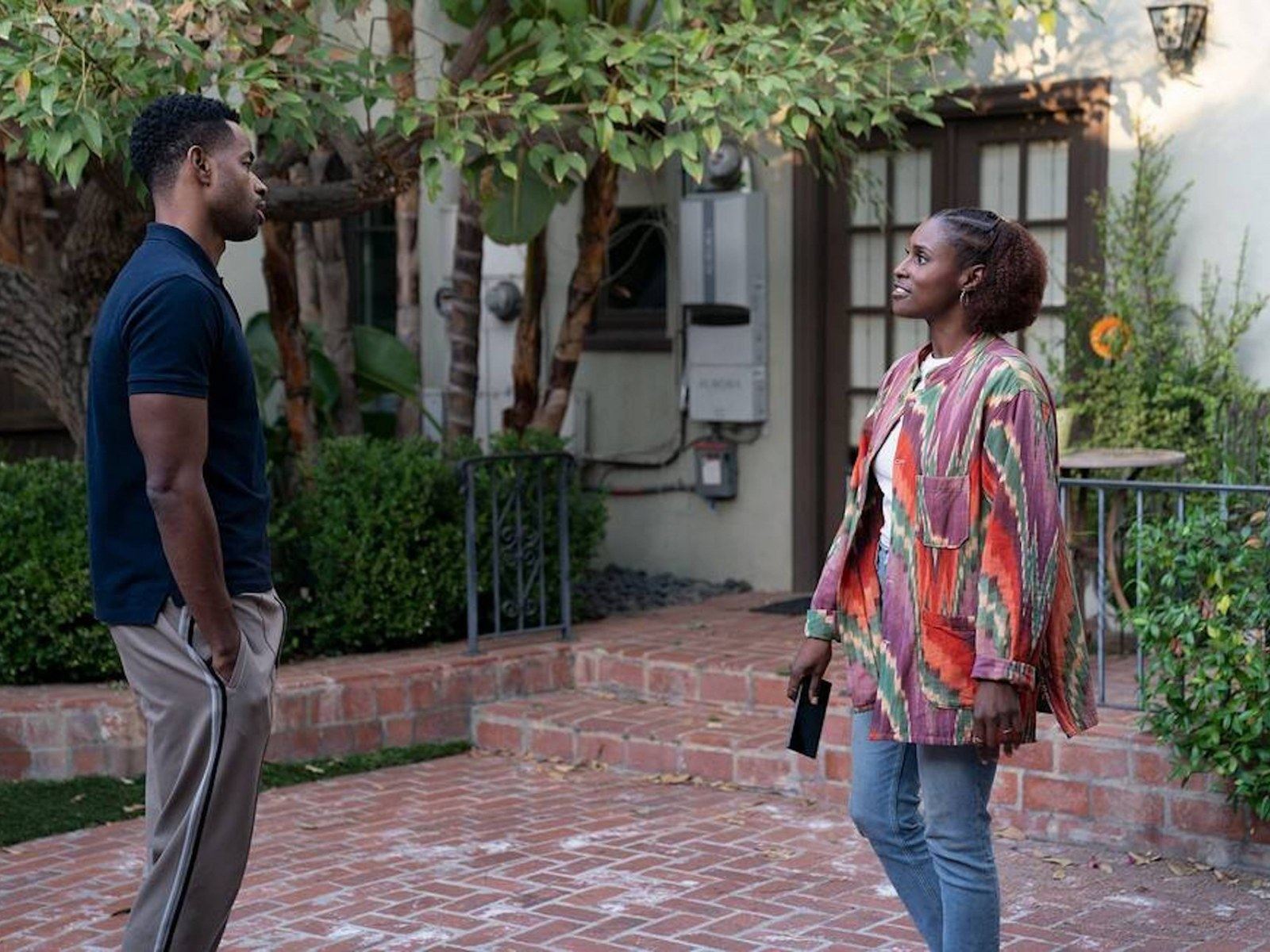 Lawrence in the mirror practicing his pitch while Condola got the block blowin’ up with her crazy rude alarm. It’s Thanksgiving season and Condola is throwing a friendsgiving jam at the crib that Lawrence just invited himself to. [insert side eye] We’ll see how this goes.

What we do know is that Lawrence ain’t making that pitch. He walk into the job going under and jump in the car with Chad being Chad and giving him the low down on keeping appearances, keeping coming up and Bradley Cooper.

I Hope Macy Gray Is Okay

Now, when Lawrence runs into Issa at the coffee shop, everything is cool and kinda cute. The spoiler alert game must’ve been something they did as a couple and breaking old habits takes a minute. It takes a mad awkward turn when Condola walks up on the end of a joke. She’s lookin’ lost because she thinks Jada died. Lawrence is all uncomfortable because his girlfriend caught him joking with his ex-girlfriend. Then Issa just turns into weird ass Issa. Spoiler alert: everybody in Insecure is mad insecure.

Skip forward to Issa and Molly grocery shopping for Thanksgiving and shootin’ the shot about family feuds. Molly is still mad at her dad, but buying 12+ avocados for 3.99 each just to make a 7 layer dip. I’mma need you to calm down on the avocados, sis. As a matter of fact, everybody calm down. Issa’s complaining about spending the holiday with her mama’s old man Stanley and his fam. Molly wants to invite Andrew and Issa ain’t feelin’ it. Her filter is all the way gone when Issa tells Molly that she’s about to scare dude away.

Meanwhile, Issa stuffing groceries into corners like my mama used to hide money in lampshades because the way her & Condola’s Block Party budget is set up… So you already know Molly mad. You can’t bring Condola’s name up without Molly rolling them eyes, honey. These besties start going back and forth at each other like they at the Thanksgiving spades table.

Issa tries to make like the coffee-shop-pop-up was all good and Molly pulled the “thruple” card out on her. [put the queen down] Oh, but Issa came with it right back and tossed ‘Dro on the table. [pulls out the ace] Molly is cutthroat with TSA bae and Issa giving it up for confiscated goods. [Big Joker taking all ya shit] Damn. Molly and Issa both recognize that something is completely off with their friendship and has been for some time. Nothing a chat over pie can’t fix, right? Right….

You Have a Right to Feel However You Wanna Feel

Friendsgiving at Condola’s got Lawrence moving from laying pipe to fixing sinks. Okay, bro. Molly’s mama wondering why that ass is gettin’ fat and her dad is just trying to make peace with Snapple. While Molly is waving off her dad and her brother’s pregnant fiance, Issa and Ahmal are rolling up to Stanley’s crib as he’s being rolled out by the EMT. Loose gravy will trip a brother up every time, I guess. Mama pulled the “go on in there and make friends” on Issa and Ahmal who clearly ain’t with it and skipped out for Mexican food.

Molly and the fam are circled around her phone looking at Asian bae, weighing out whether or not she should have invited him for dinner. Molly’s mom gotta whole different outlook than Issa did. She’s also asking for grandbabies, sooooooooo.

Lawrence is not only getting to know Condola’s friends, but apparently Drunk Nikki’s outlook on the post-divorce agenda. Never let your girl that can’t hold her liquor talk to ya man… and never let ya man “fix” your sink on a holiday.

The folks finally honestly spilling the tea is Issa and Ahmal. Ahmal comes clean about his family’s reactions to him being gay and how hard holidays can be. Solidarity, fam. Issa’s being open and honest with her brother about how she feels about Lawrence seeing Condola. It ain’t about Condola either. It’s about the work. The work and the time that she put into their relationship, into Lawrence, for someone else to reap the benefits.

Folks who play Taboo don’t play about Taboo. Molly’s brother is not about to let her daddy issues ruin his game. The man is human. Forgive him. Ya mama did. And she does… with pie.

Meanwhile Lawrence and Condola are having it out while cleaning up his mess from the sink. Lawrence is in his feelings about being the rebound guy when Condola nicely reminds him that he invited himself to the party. He mad, but it’s true. Condola didn’t want the pressure, but enjoyed the company. Lawrence apparently is thinking about the future and a family and Condola ain’t there. She’s also clearly not okay with the games that exes play, because she brought up the coffee shop with Issa with the quickness. Not only that… Condola brings up the whole truth for Lawrence. If Issa hadn’t cheated, they’d still be together. Plain and simple. Nothing he could say about that.

Issa drops off Ahmal after a lit Sibsgiving with a live Mariachi band. Ahmal can tell that something is going on between Issa and Molly, but she plays it off. Brother stay giving a good word, tonight though. You can tell Issa wasn’t feeling talking to Molly tonight, so when Ahmal sums up life by telling her that she ain’t gotta do nothin’ she don’t want….. that was the end of pie night. Or the end of a friendship.

Insta stories and Trina showing up to Kellie’s for Thanksgiving.

One month before the Block Party and Issa’s making moves while her residents stage a move in led by Trina. Apparently ain’t no water and folks is mad. I mean, mad mad. Issa been slippin’ on her managerial duties.

Molly been working hard, too and needed a little water to hit them pits before she opened the door to Andrew. He clearly came to put in some work, but Molly had to finish what she started before they could get it in.

Everybody putting in work. Issa got fliers to proof for the Block Party, but Condola ain’t responding. Molly gotta full work circle with colleagues who can’t pull an all-nighter because of kids, so she calls off a date with Andrew. He’s cool with it.

The next day Issa and Molly are doing more than bumpin heads, they damn near bumpin’ rear ends trying to park at Tiffany’s to see the baby. Things are mad odd between the two of them and it’s showing up in a ton of ways. By the time Issa drives around the corner and parks illegally in the church/strip join parking lot (hallelu), Molly almost looks annoyed to walk in with her. They fake talking around Self-Care Sundays trying to see who’s cool with who.

Inside it ain’t no better. Lawrence is getting the grass-ain’t-always-greener story from Derrick who shares how he and Tiffany weren’t ready to become parents. Downstairs Molly and Issa trip over one another with petty swipes and missed jokes while listening to Tiffany talk about how child birth is not the business. Not only was it hard and painful, she almost didn’t make it because no one in the hospital was listening to her. #BlackMamasMatter.

After Tiff gets called to check on the baby, Molly rolls with her. Issa and Kellie talk about breast milk, well… Kellie talks about tasting breast milk while Issa asks her if she knows what’s going on with Molly. Kellie doesn’t know a thing, but thinks there might just be a communication break down. Speaking of breakdown, Kellie might be having one ’cause she started looking at Lawrence like a snack when he came downstairs.

Lawrence asks Issa to talk and Molly peeps them in the back while she’s talking to Tiff upstairs. She’s in her feelings about Issa calling her out on her old ways and basically says that Issa is doing the same while she’s out there chattin’ with Lawrence. Molly is holding the baby and getting sappy then asks Tiffany if Issa has been talking to her, just because Tiff told her to do what makes her happy when she brought up work and Andrew.

Molly might think Issa and Lawrence are up to no good, but that ain’t talking about shit except for the Block Party. Issa is focused. Once she brings up Condola not answering her calls, it seems that Lawrence might be trying to tell her… welp, I guess we not gonna find out *cough, cough, we already know* because Issa’s headliner dropped out of the Block Party and she’s got work to do. When Issa comes inside to tell the girls she has to leave, Molly assumes it’s on some #teamlawrence type stuff because she is eye-rolling like a mug. It doesn’t help that she peeped Lawrence leaving from the window.

The next day, Issa is doing what she does and hyping herself up in the mirror. That is, until Mirror Issa cut it off. She got problems, too, and she sick of being the hype man. Issa jumps online to find a new headliner and who pops up on the ‘Gram? Bey. Yes, as in Bey-once. Issa almost tried sliding in Bey’s dms and thought better of it. She searches local L.A. artists and Mustard keeps coming up. She picks up the phone and starts reaching out to old friends to see who can help her out… she gets a church invite, but beyond that nothin’.

Molly and Andrew are finally out on a date. Nice. When she gives him the lowdown on the after party at her place, he tells her that he’s got plans with the boys and Molly gets dead in her feelings. Andrew doesn’t see where he fits in between work and everything else she’s got going on. You can tell Molly ain’t happy.

The next day, Issa calls Molly to talk and Molly is ready to really tell her what’s been going on. When Issa cuts her off and tells her that her headliner for the Block Party dropped out and that she needs a connect to another artist, Molly asks her a million and one questions about what she did to make him drop out. She’s clearly pissed that Issa didn’t call to talk about them. Issa wants Molly to talk to Andrew about reaching out to an artist he’s worked with before. Molly says she’ll ask, or rather, that she thinks she can ask.

That evening, Molly puts on her big girls and heads to Andrew’s to apologize for being distant. She lays down her priority list and he’s at the top. Molly also calls Issa to let her know that she won’t be asking her man for any favors. Keeping business and pleasure separate. No exceptions. On that note, Issa is done for the day. Mirror Issa tries to offer a shoulder, but all Issa wants is a shower. Yeah, that ain’t gonna happen in that muddy ass water. Sorry Issa.