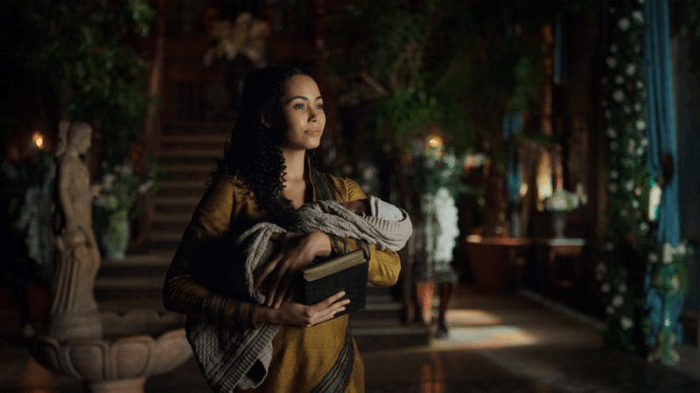 ***Spoilers be burning bras and not seeing color***

Yo, that ringing in your ears ain’t just cuz some shit exploded, b. In the words of Agent Smith, that ringing be the sound of inevitability. That shit blew and now the Lydia death squad looking like the first wave on the beach for D-Day. This shit all bad fam. Especially when the League of Shadows literally comes out of the shadows and starts finishing these cats off. Quinn was actin’ real crazy before, but all it took was a home invasion and now your boy is FOCUSED, MAN. He finally rolls up on Lydia, like et tu bih?

Sunny and Bajie pull up in the whip with Amelia still bleeding out. They looking for the healer, but all the “patients” in here are literally getting smoked out. Like, with the gas masks on fam. Where they do that at, yo? Healer recognizes Amelia and decides that maybe he can put down the trafficking for a second and help her out.

Maaaaaan, listen. Veil Da Fictional Bae out here on that Underground Railroad with Henny Rock, enjoying some of this good natural air and foliage and shit but then the League come through the woods, so she gotta keep in moving. But yo, how Quinn got enough folks to fend off an invading army and send like 6 roughnecks to get Veil too? Current administration must have approved that budget yo. Damn sure ain’t prioritize no education needs for Henny Rock I bet, but he got all the soldiers he can handle. Before they find Veil, a mystery wood elf come and swoop her up for the rescue.

Back at the Lazarus Pit, Quinn got Lydia in confinement.

[quote_simple]Quinn: You came to kill me.
Lydia: I came to avenge my son.
Quinn: So…can we talk about how weak your son was? Real talk? Cuz I really tried to give him this shit but he got them Trump hands and couldn’t grasp the destiny yo.[/quote_simple]

Quinn gets word that they didn’t find Veil and sends the squad back out. Lydia is like, fam, (vigorous hand clap) DON’T NONE OF THESE HEAUXS LOVE YOU. Lydia is like I came to put a dagger through your heart. Quinn is like, you know what, talk yo sh or live your truth Lydia.

For the record, this is the third time in five episodes that Quinn done gave someone some shit to kill him with and instructed them to do him harm. Gabrielle was a test, which he passed. Ryder wasn’t ready for this gangsta shit. But Lydia, fam, nah, Lydia been listening to that DNA track on repeat, with the Don Cheadle rapper hands and all of that. She went for the kill INSTANTLY. So fast that it probably made Quinn get erect.

WAIT. Um Wait. What just…are they actually about to get it shaking…and the licked Quinn’s blood off his fingers…
Ok, so I have questions:[check_list]

Healer come out and say Ameila is gonna live and is like, yo, whatever you want is yours.

Healer says they can’t go anywhere till morning cuz I guess they ain’t reinvented headlights yet. Sunny feeling guilty about Amelia getting hurt and Healer is like, fam, I’ve seen some shit. I mean, some legit fucked up cats. You Solomon Grundy fam, you still got heart.

Tilda come to confront Odessa by the fountain cuz Odessa cuttin’ class again. She like, yeah, I’m out cuz The Widow selling us them Jill Stein lies fam. We know she trying to join up with Ra’s al ghul, but Odessa is like, yo, that shit was prison and I never going back.

Tilda tells the story of how Widow saved her cuz her husband didn’t just abuse her, but ayyyyebody, I guess. Including Tilda. Widow for real started women’s lib when she merked her husband. Odessa is like, aiight, I’ll stay, but only if I upgrade my sleeping quarters.

Which means she done went in and kissed herself a regent and liked it. Right before Tilda…graduated…Waldo comes and summons her. Tilda feel like she needs to explain herself, but Waldo is like, yo, don’t nobody care about your preference in these Badlands streets, but just remember the last regent that let his feelings get him snatched up. More refugees come in and this time Veil is on the truck. She tells Tilda she needs to speak to the lady of the house.

M.K. getting his Bugs Bunny on, legist crushed a carrot the size of the space needle, but whoever owns that decrepit garden don’t like folks stealing from him. So dude is a farmer and an unyielding axeman with a propensity for murder? Got it. Now, the problem is that MK got cut up when he got caught, but dude can’t enter the avatar state, so I guess he just been training for nothing and was about to let the farmer just cleave him on the spot? Ok. Ava gives dude the hatchet work to the dome and saves MK. She been tracking dude this whole time, so now she a runaway too. She says the Abbots will be looking for them so they gotta keep moving. Ain’t nobody trying to end up like Brown Boy Glorious.

[quote_simple]Widow: I can’t imagine what Quinn put you through (remember that).[/quote_simple]

Widow asks Veil where Quinn keeping the league at, cuz you know, she don’t want him to hurt anybody else (Like she fuckin’ cares). Then she asks if she can translate the book again. The whole time I’m like, damn, why she being all cold towards bae (remember that).

MK and Ava come up on a hotel? Word? Blanca Peak still got rooms for the night yo?

Bajie getting gassed up (again, literally) and looking at some magazine that might predate us, fam. He sees a truck pull up and dude seems way too familiar with it. He like, yo Sunny, we ain’t gotta leave right now, but actually right the fuck now. He says its something worse than the mercs. And it is, it’s the Abbots yo. Akatsuki rolling through searching for MK, but the tracker pinging somebody up in the gashouse. This shit is legit tracking Bajie, yo. Bajie was a Dark One or some shit? Fam. He hides in some nasty ass tub until the Akatsuki leave.

At the Lazarus Pit, Quinn gets the Widows’ message and assembles a team, even though the instructions on the note said very specifically the opposite of putting a team together.

At the hotel motel, MK looking at the Christmas decorations and asks Ava what they were celebrating.

Ava having that existential crisis because now she left the Northern Air Temple and she got nothing left to believe in. MK comes clean that he gave his mom the sleepy time tea in the mirror. Ava thinks that it was an illusion and MK is like…nah…I’m pretty sure I ended the circle of life, b.

So, Quinn, who was invited to come and talk, unarmed and alone, instead, is creeping up in the sanctuary, to slit dude’s throats? Fam. Where, if any is your chill at? Widow turn the lights on like, bruh, can you not read directions? Tilda put a monarch star through one of Quinn’s dudes to even the score.

She gotta interrupt the pissing match between Waldo and Quinn first, but the Widow lets Quinn know that an alliance would be mutually beneficial. Quinn is about that life, but he knows that Widow got Veil and Henny Rock and wants them back. Quinn is like, yeah, this ain’t really a negotiation. Either I take the finest woman in the Badlands and her son back to my crib or the alliance is dead as Ryder.

Still up in the hotel/motel, MK stumbles upon a WIRED magazine. But yo, is that Bioshock they talkin’ about on the cover? YOU MEAN TO TELL ME THEY BEEN TRYING TO GET BACK TO RAPTURE THIS WHOLE TIME. Nah man, don’t do it. Would you kindly put that magazine the fuck down and forget you saw that. Nothing good is down there fam.

The Akatsuki show up and turn the power on so Ava and MK scatter. Man, you know this hotel was trash because they playing some boring ass version of Bing Crosby Jingle Bells or some shit. If you ain’t bumpin’ Mariah Carey’s Christmas Album up in your hotel lobby, then your hotel is garbage. You can’t get your holiday creepin’ on at the hotel and they got you listening to some old White crooners signing Jingle Bells fam (arguably the weakest of the Christmas songs, fyi). They sneak past these cats into the hallway and Sunny is waiting for them. They bout to make a break for it, but nah…its too late. Akatsuki up in here thorough and ready to wreck shop.

Man, I remember how this went down last time. It was arguably the worst beat down of a protagonist in TV history, like even worse than when Zoom beat the Speed Force off the Flash. The whole time I’m like Adrian yelling from the corner like, YOU CAN’T WIN. They all square up and Sunny tells MK to go Avatar, but he can’t. Ava is like, well fuck it then, I’ll do it…weak ass Y chromosomes man… The Akatsuki is like, oh word, that’s what we doing? Well, let us hit that eight ball hemorrhage on the eyes too then. Man…they getting. Beat. To. Death. This is not a good look. Even Ava got that two ton to the chest and landed on Sunny’s sword. She real kibob right now.

Bajie come through like the Kool-aid man driving the truck through and putting down one of the Abbots. With the distraction, Ava gets one more stunt in her and puts the hand signs through another one’s neck. One more left. He calls Bajie brother and we learn that Bajie used to be an Abbot back in the day. And that he also used to have the dark gift but he lost that shit on his way to the mines or some shit. He still remembers some techniques though and paralyzes dude temporarily. While dude is still in the subzero state, Sunny grabs the Silver Moon blade and carves dude up…

…but not before he hit your boy with the Tai Lung pressure points.

At the conservatory, Veil comes up on Widow and Widow disappointed that she never translated the book. Widow pulls out the vial from last season that Veil gave Tilda last season. Widow talkin’ bout she got a clear conscious and that she’s doing what she’s doing for the good of her girls.

MAAAAAN, WHAT THE FUCK. She serving Da Fictional Bae up to Quinn. Like that. If this ain’t the very metaphor for White feminism, then I don’t know what is. THIS SHIT AIN’T VERY INTERSECTIONAL WIDOW, I CAN’T RIDE WITH THAT.

At the hotel /motel, Ava finally passes and completes her quest in becoming a woman in a refrigerator cuz I’m sure MK bout to be super Saiyan now. [audible sigh]. Sunny is like, yo, we gotta—nope, whatever dude hit him with got Sunny reaching for his inhaler or some shit. And that’s where we leave it fam, Sunny gasping for breath and staring up at the ceiling. Swear, if MK is the last thing you see, then I guess nobody gets out clean. Gotdamn man.