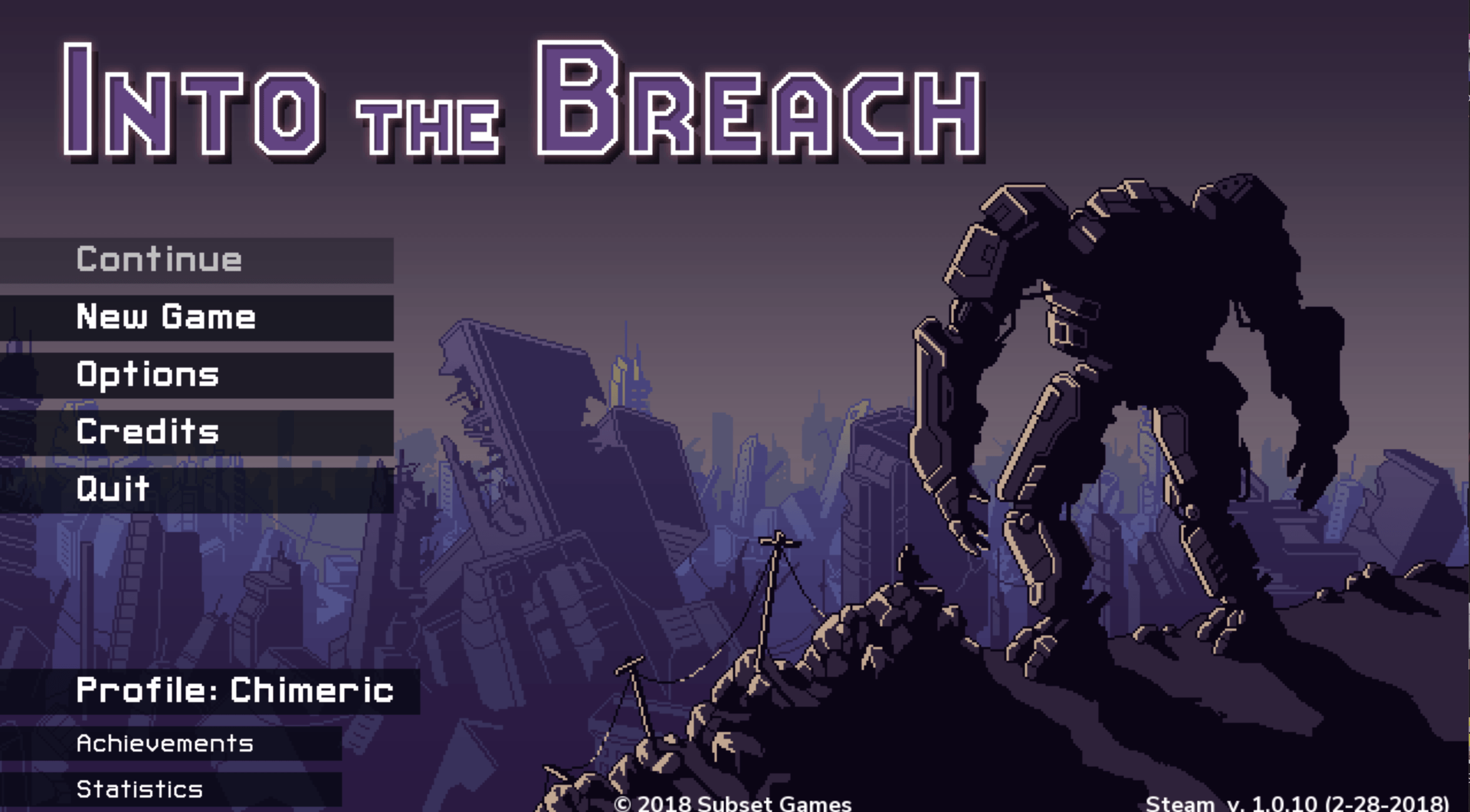 When you boot up Into the Breach (currently only available on PC), a lone bipedal mecha stands looking off into the ruins of civilization. As soon as you click New Game you find yourself in a hanger with three mechas and a pilot. This is the start of the current timeline, your chance to stop the Vek, insectoid-like kaiju, from destroying humanity. The corporations that find the weaponry occupy four islands, and it is to you to minimize causalities and survive the onslaught.

Into the Breach is the follow up to the roguelike-like, FTL: Faster Than Light. FTL was enormously difficult, as you were constantly facing the cruelty of the random number generator as piloted your spacecraft through eight increasingly dangerous sectors. Into the Breach is also a very difficult game, but has the decency to show mercy.

While the plot sounds like a mix between Pacific Rim and Edge of Tomorrow (or more accurately, Live. Die. Repeat.), the gameplay is a cross between Advanced Wars, XCOM, and chess. Like most tactical role-playing games, you playing field is a grid and you have units with distinct abilities that you can move around the map. Unlike its siblings in the genre, Into the Breach distinguishes itself in three distinct ways:

1) The maps you fight on are small, only 8×8 tiles.
2) The victory condition for each mission is simply “Survive X Turns,” with optional objectives.
3) The enemy’s AI actions are entirely deterministic, and you know exactly what they are going to do and how badly it’s going to hurt. 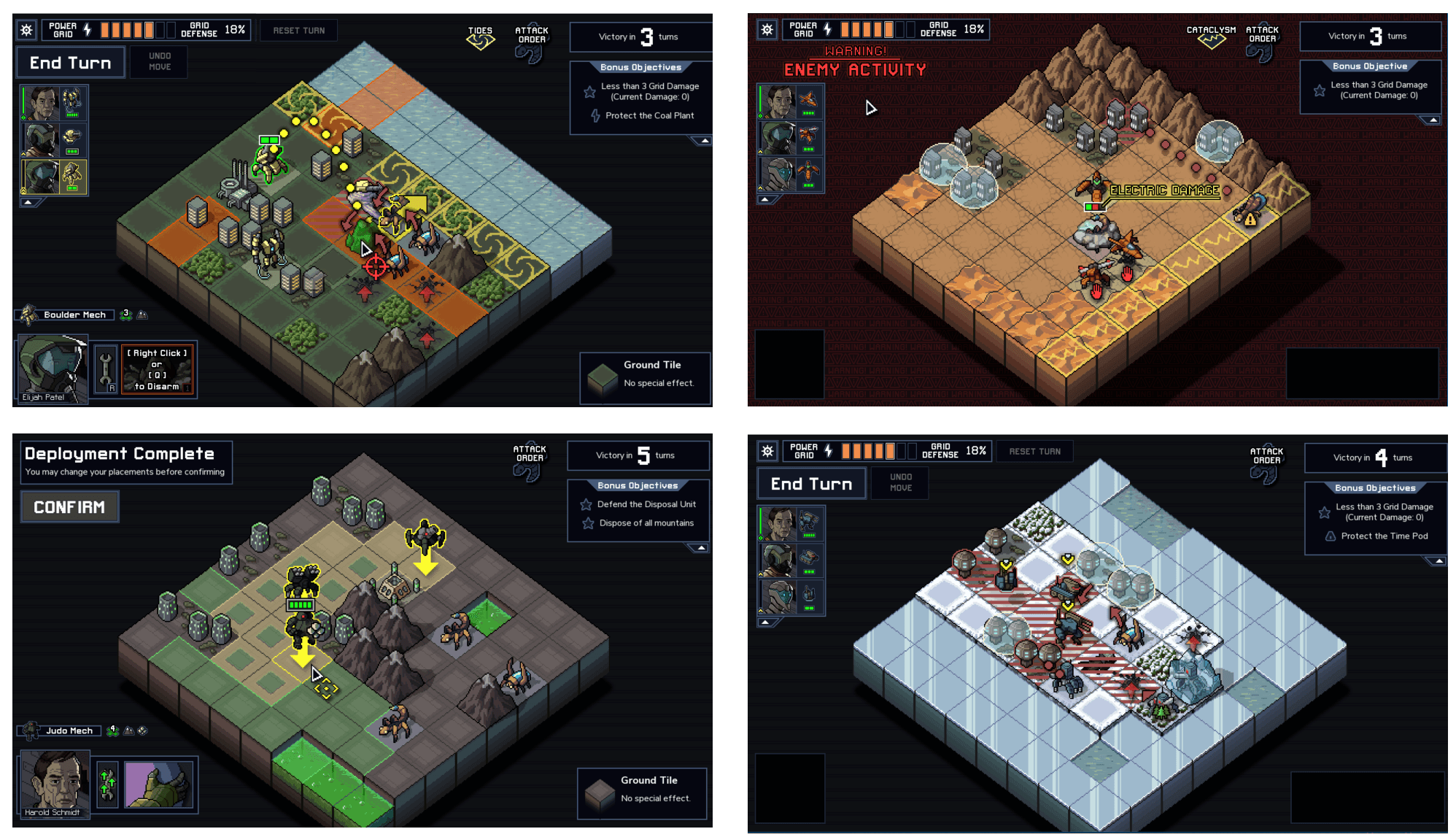 That last bullet is the game changer. At the start of each turn, the enemy will move into position and telegraph its attack. Then, it is up to you to position and execute your actions against the Vek to mitigate damages to your cities and by association “The Grid,” the only thing keeping humanity running and Intro the Breach version of life points. Different mechas offer different techniques, with various damage numbers, knockback effects and other utility abilities. And while your instinct is to destroy the Vek, you’ll quickly realize that while the Vek are playing Rampage, you’re playing a careful game of traffic control and while keeping a large insect seems like it would always be the right call, often times, preventing the Vek from damaging one of your cities will pretty much always be the priority. To aid with decision making, you’re also given the opportunity once per a battle to reset your turn if you figure out a different battle strategy, and all movement can be undone until you take your action.

You start the game with a single time traveler pilot and the Rift Walkers mecha series. 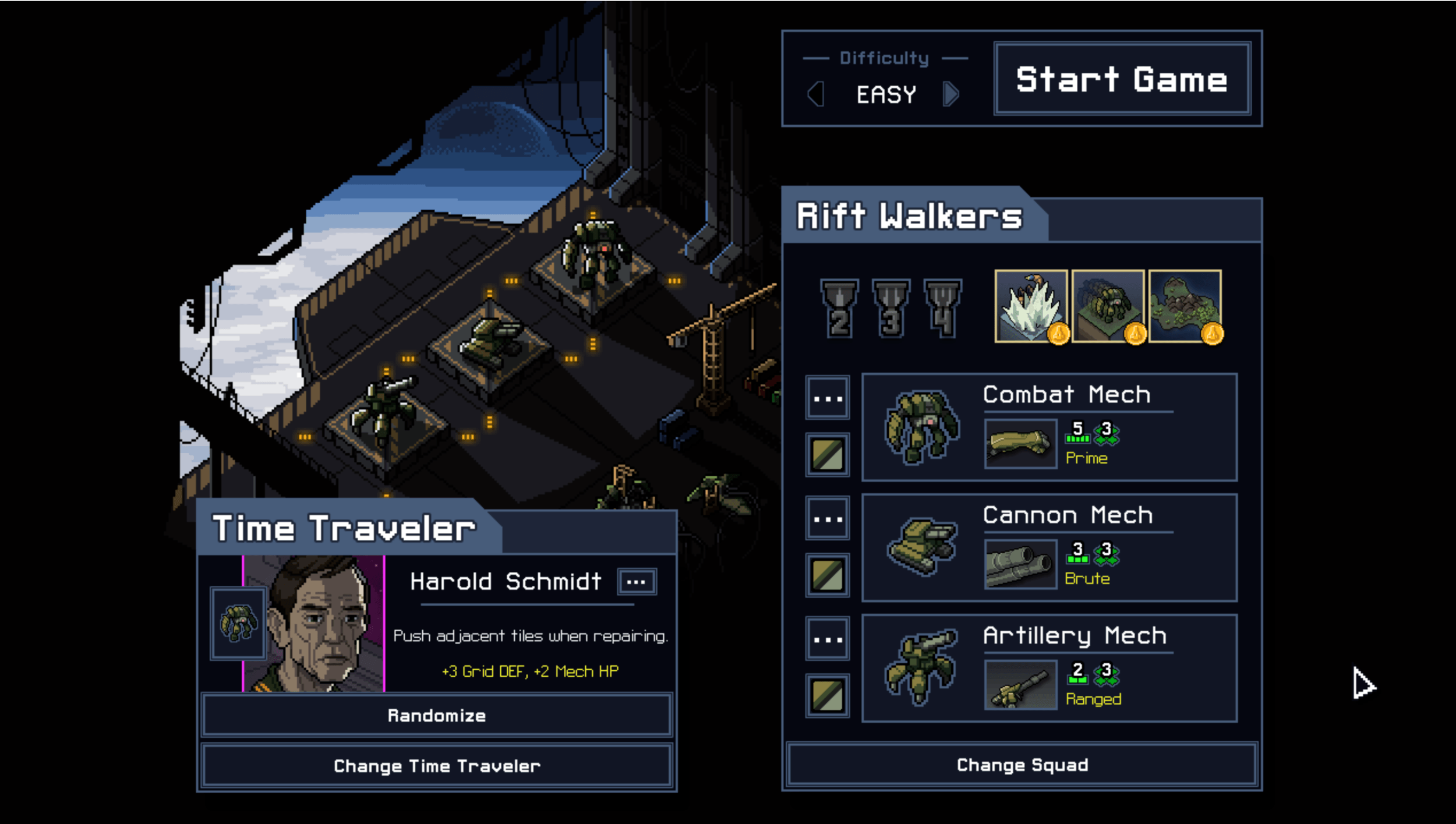 As you live, die, and repeat, you’ll complete achievements that give you coin that get you different mecha series and find time-pods on the map that will occasionally unlock different pilots. The racially diverse cast have unique traits that range from gaining experience faster to unlock other skills to providing armor to your mechas or giving extra move actions. 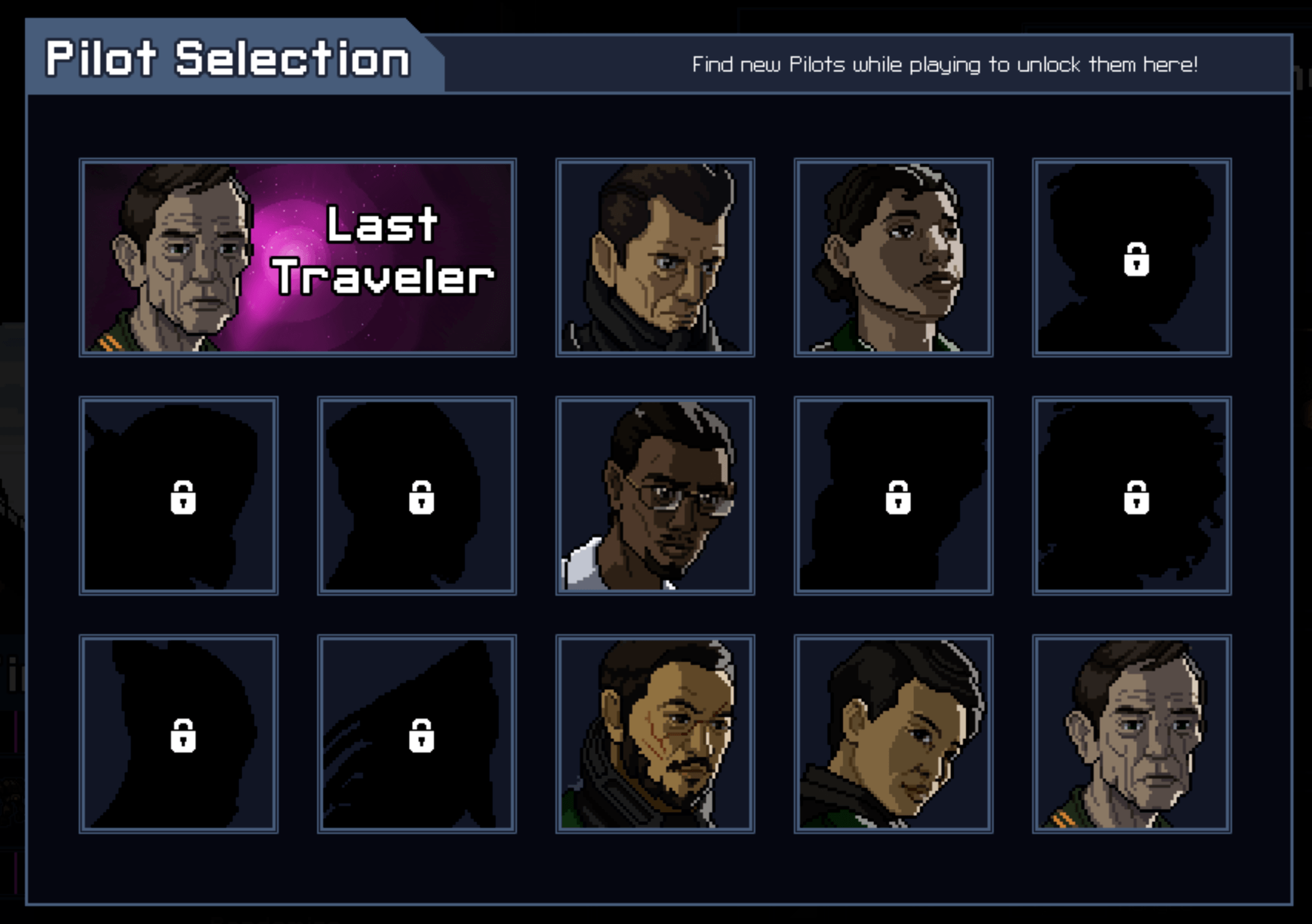 The game has four unique islands. One will be available at the start, and you’ll unlock the rest through gameplay. Each island has a different biome, which results in different tactics. One island is prone to flooding, whereas another has an A.C.I.D. problem. You’ll find that certain mechas have different specialties and through trial and error, you’ll fumble through battles. If at any point, the Grid goes down, you’ll have the opportunity to send one of your pilots back to the past to attempt to curb the Vek invasion once again. 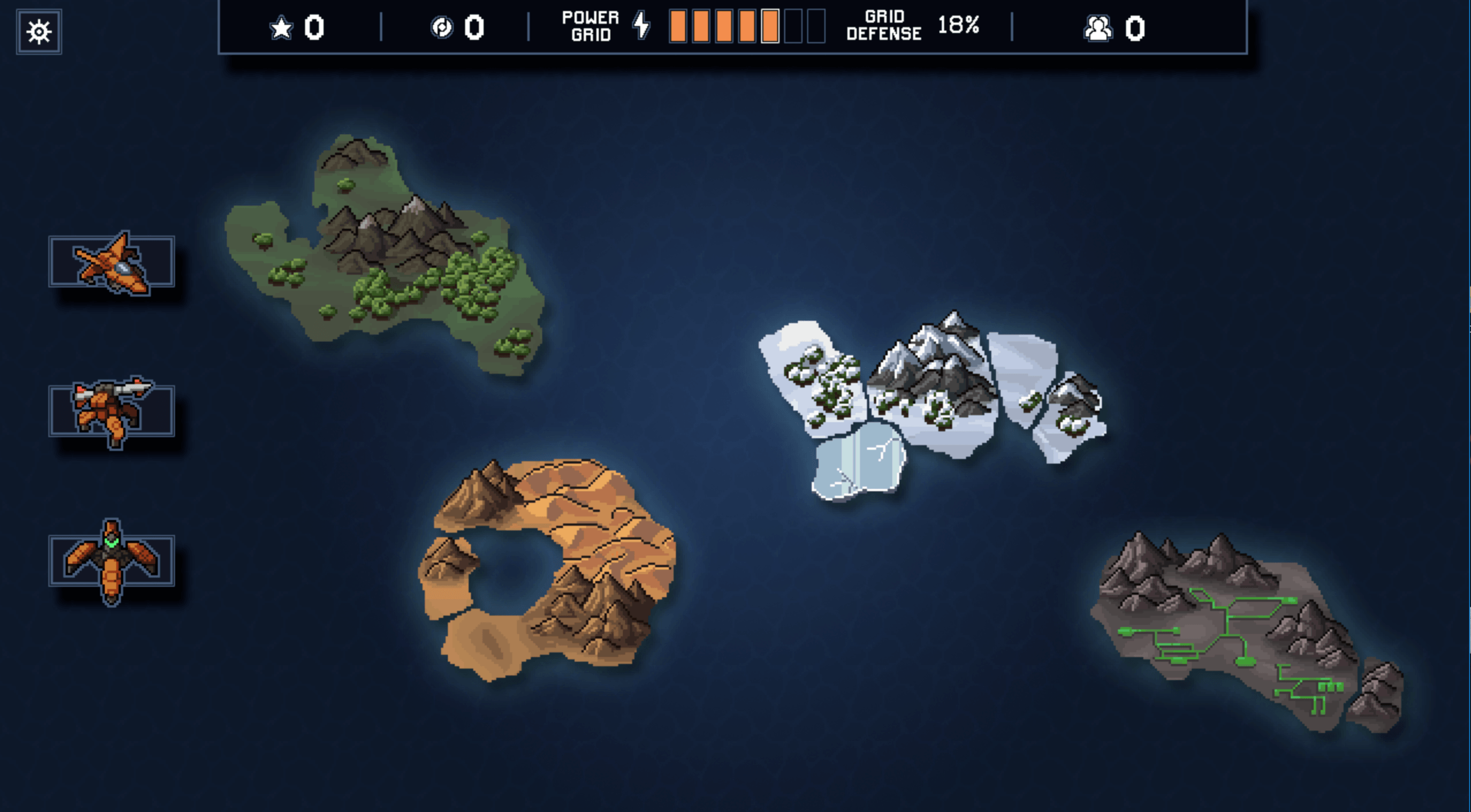 As I kept struggling on normal, I ended switching to Easy to quickly unlock different mechas and the rest of the islands. And you know what? Even with the reduced spawn, the game was still challenging. It was still on me to make the correct decision and to make sure I wasn’t forgetting some environmental effect or end my turn with unearned bravado without checking the damages numbers of an enemy attack, or the exact turn order. But with each timeline, I learned something. And each timeline, I ventured with slightly more confidence before a misclick after a reset resulting in a wipe humbled me.

The mecha and kaiju design are incredible. The gameplay is addictive. It’s easy to learn and challenges, almost taunts, you to master it. For only $14.99 on Steam, Into the Breach is more than worth its price tag and a fantastic way to lose a couple hours in front of a computer screen. After two solid four hour marathons, I’ve only just scratched the surface and I can’t wait to dig deeper.