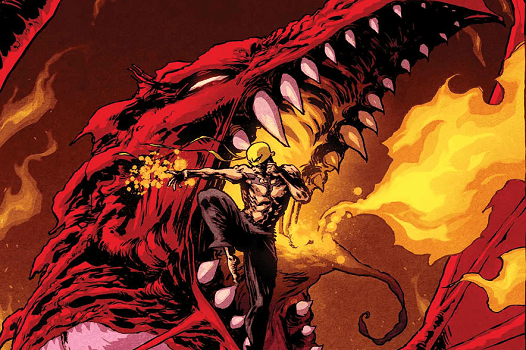 I’ll be honest with you. I don’t know if Marvel is going to really invest in keeping an Iron Fist title alive. Historically, despite decent sales, they haven’t kept the series around for very long. I CAN tell you that if they do plan to really keep this series happening, Iron Fist: The Living Weapon stands a pretty good chance.

Issue #2 picks up almost directly after the first one in the immediate aftermath of the (I shit you not) robo-ninja attack on Danny Rand’s apartment. As I mentioned in the last review for this title, readers who are used to a slightly more jovial Iron Fist might feel a little disoriented by this battle-worn, disengaged take on the character. A lot of the issue is centered around giving us a look at the magical city of K’un Lun where Danny Rand had to kill a dragon barehanded to acquire his kung-fu powers and become the Iron Fist (Did you hear me? I want to take a second and harp on that fact that HE HAD TO KILL A DRAGON to become a superhero!!!!). Sadly, Kung Fu Heaven’s festivities are about to be interrupted by uninvited guests. We also get to see an equal amount of spotlight lent to the moments in Danny’s childhood that inevitably lead to him becoming the Iron Fist. Kaare Andrews is clearly influenced by old martial arts films and brings several of those elements to the script with shrieking women, strong familial bonds and grand speeches driving the narrative. Visually, the book has yet to lose a step. There are certain panels that look like they could be stories from an old scroll. Andrews makes Danny’s abilities really seem like something you’d have to kill an ancient dragon to obtain.

Bottom Line: Another strong offering from Kaare Andrews that’ll keep new readers sated for next month. 8.5 out of 10