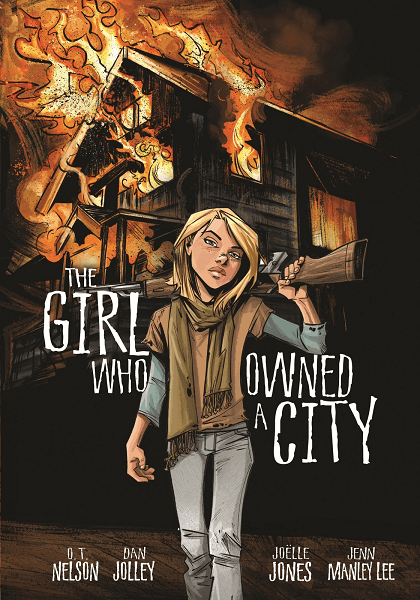 See That? That’s my old, battered copy of “The Girl Who Owned A City” that I dug out of the giveaway pile found during my period of Library Service senior year of high school.  I found it while enduring the sobering reading  “Lord of The Flies” for my AP English class. Like Lord of the Flies, this story is a tale that features children living without adults and the hard lessons that they learn with living without them. The back story here is that a little more than a year ago some unexplained virus—a plague hit the world’s population and killing off all the adults. Actually, the plague took anyone over the cusp of puberty: so the only inhabitants are children no older than twelve.

Enter Lisa, a ten year old girl who is smart as a whip and super resourceful to boot. Once a time ago all she worried about was school, her parents’ affections and being the older sister to an impossibly bratty younger brother named Todd. She’s been forced to grow up quickly in this new world so now she’s going on scavenger runs to score food and being the only person her kid brother Todd can depend on for his survival. Sitting through lectures of my English teacher drone on about the book I had half read and had little interest in, I would daydream. My mind would wonder to Lisa, Todd, Jill, Craig and all the other children and the world that had been left in their hands.

A world without adults.

A world left in the hands of children.

A world without rules.

A world without the conveniences that, as children, they thought that they

would always have: from the smallest pleasures like ice cream and fresh milk

what they hold dear because there are no adults around to do it for them anymore.

Hold the phone! Since this IS blacknerdproblems.com and we are constantly looking for ourselves to be represented in all nerdy medium that we watch, read and immerse ourselves into….I was pleasantly pleased to see children of color found in this graphic novel adaptation. Sincerely, I’m happy that in a post apocalyptic type situation that the world has found itself in that people of color haven’t been erased from the face of the planet and are present and accounted for here. Especially since Lisa and Todd, who are named (and very likely modeled) after the author’s own children are clearly Caucasian. This graphic novel adaptation which was  published in 1975 is a labor of love between a few people: of course, the author O.T. Nelson of the original book and fiction writer Dan Jolley who’s writing credit include Tokyo Pop, Marvel and DC Comics. Artist Joelle Jones and Graphic designer Jenn Manley Lee  account for the rest of the team behind this work.

And the adaption does not disappoint: so many themes run throughout this book–responsibility, freedom, leadership, selfishness, survival, fear…Lisa goes to being a girl who uses her quick wits to provide for herself and her brother (and sometimes a few others) to finding and fortifying a whole place where she and SEVERAL other children can live together in harmony without fear of the rough gangs that strike out and steal from others.

It is here where she starts to understand the definition of “burden” and the true weight of responsibility that comes with being  a leader. This is also where Lisa  begins to trust and lean on others for she can’t do it alone. No one can and in this new world, all they have is each other. This, of course, called for a reread of the original novel before I finished the graphic novel because…of reasons. Rereading the story through these panels made me smile: every major event was accounted for–the The move to the school, the attacks, Lisa’s grave injur, the confrontation with the gang member who was in disbelief to learn that Lisa, a GIRL, was in fact, the leader of Glenbard…

This graphic novel adaption of ‘The Girl Who Owned a City’ finishes out at 126 pages total, whereas the book in which it was adapted from ends on page 189. One might regard them as both short reads but sincerely there is substance within these pages. There is something we can learn from Lisa, from Todd, Craig, Jill and even villainous Tom, the leader of the gang that threatened to take all that they worked so hard to create for themselves: We are not alone in this world. We are not alone and there will be good and bad elements that we will encounter. And on another note–We are all but just one small part of the equation and need others to help complete it. Just as all of us make up the universe, it takes everyone in this new world, every child within this “city” to work together and take back what was theirs. Do we not work hard to stand up and protect those who belong to us and take charge of our homes, or what we treasure and hold dear?

She doubts herself because she’s just a kid. Just a girl. Just 10 years old. Just the older sister of a little boy named Todd. Just a girl who used to be a girl scout from Troop 719. But that’s the beauty of her character: she is a child learning to navigate life without any adults and press on with only a few remnants of what they left behind.

The author has been quoted in saying that the reason that he wrote this book was because he wanted children “to realize that they are important and that they have the ability to think and make a difference.” While he uses a terrible, forever life-altering situation to befall the world to showcase this, I think it is a message that will ring true in the hearts of those that read this book: both children and adults.

To quote Lisa from one of the last few pages of the original book: “You can do most anything in the world. But you must learn the first lesson… Never be afraid..” If we think of all the great accomplishments in history, all the great feats that were done…we must also consider each and every person behind them, surely they were once in a position like Lisa: doubtful.

Doubtful and unsure of themselves if they could, in fact, pull off what great things the history books and record books will eventually remember them for.  The graphic novel adapation of ‘The Girl Who Owned A City’ is a success in visually introducing this story to those unfamiliar and re-introducing it to those who have read the tale before without compromising any of the original story’s messages.