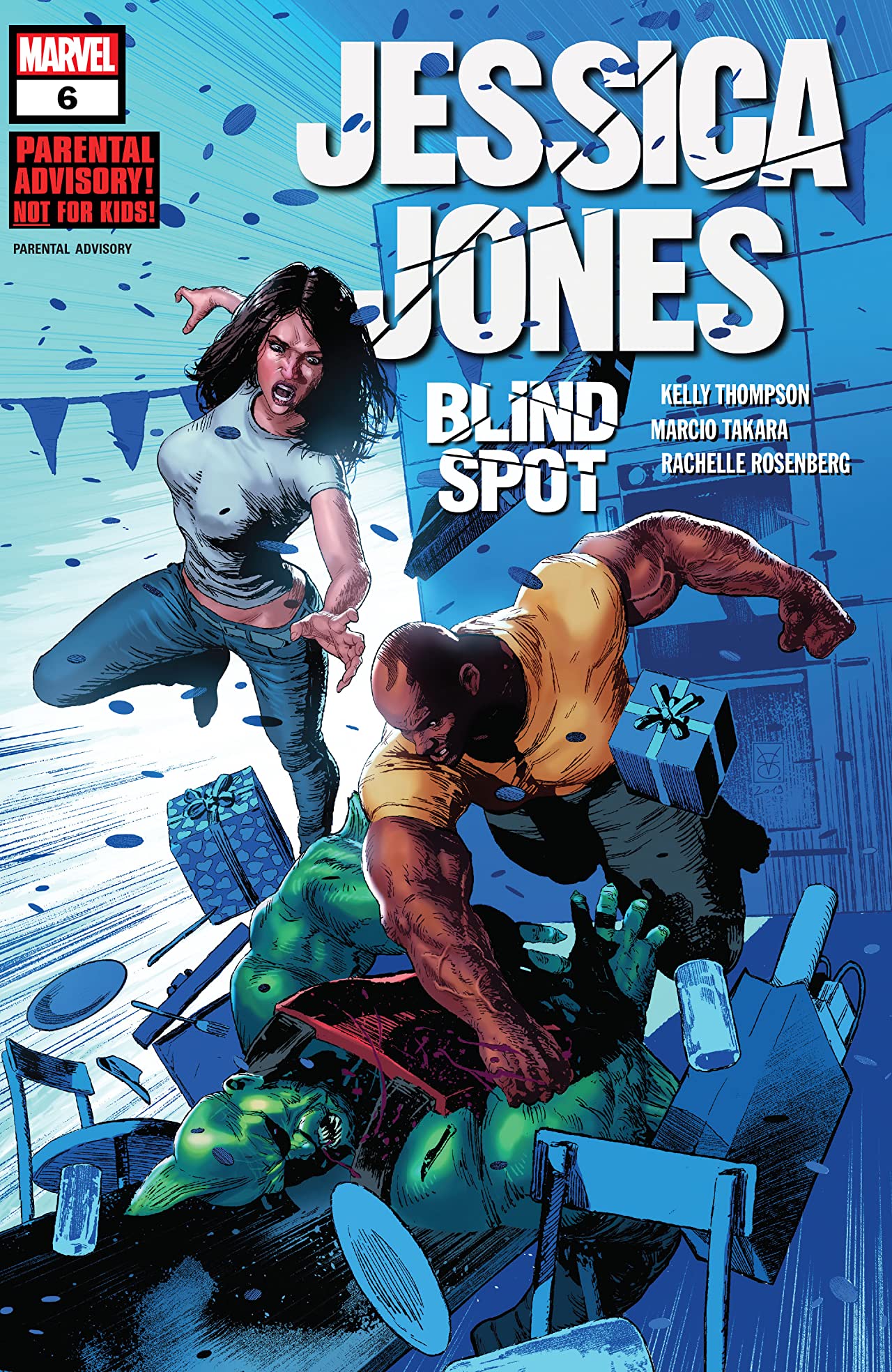 I didn’t know how much I would need Jessica Jones Blind Spot #6 this week. Amidst the punishing difficulties of social distancing who knew the best escapism was a story about friends, colleagues, and rivals having normal(ish) interactions. One of my favorite couples in comics, Jessica Jones and Luke Cage, tackle the day’s adventure of preparing their daughter’s birthday party. Subjected to the relatable stresses of friends who don’t seem to understand the concept of time, preparing decorations and buying a cake; the least difficult obstacle was probably when Lone Shark (not Loan Shark) attacked out of revenge for his going to jail.

The major source of tension in this episode begins when Jones opens the box of birthday decorations Cage bought only to reveal a cascade of purple unicorns and balloons. It takes most of the issue for him to realize his mistake. This interaction was particularly important after the previous arc. The antagonist in the previous issues turned out to be a man so riddled with toxic masculinity it literally became sentient. This manifestation preyed on strong women that reminded him of his powered girlfriend whom he abused. In this book, Luke Cage exemplifies healthy masculinity and displays behavior towards his partner that we should imitate. He pays enough attention to realize that Jones is upset and doesn’t let her stoic, stubborn responses shut him down. Once he realizes the error, he apologizes. Even when she tries to dismiss her own feelings, he gives her the space to be vulnerable and validate those emotions. This was an impressive display of the solidness that I’ve always seen in Jessica Jones and Luke Cage’s relationship. 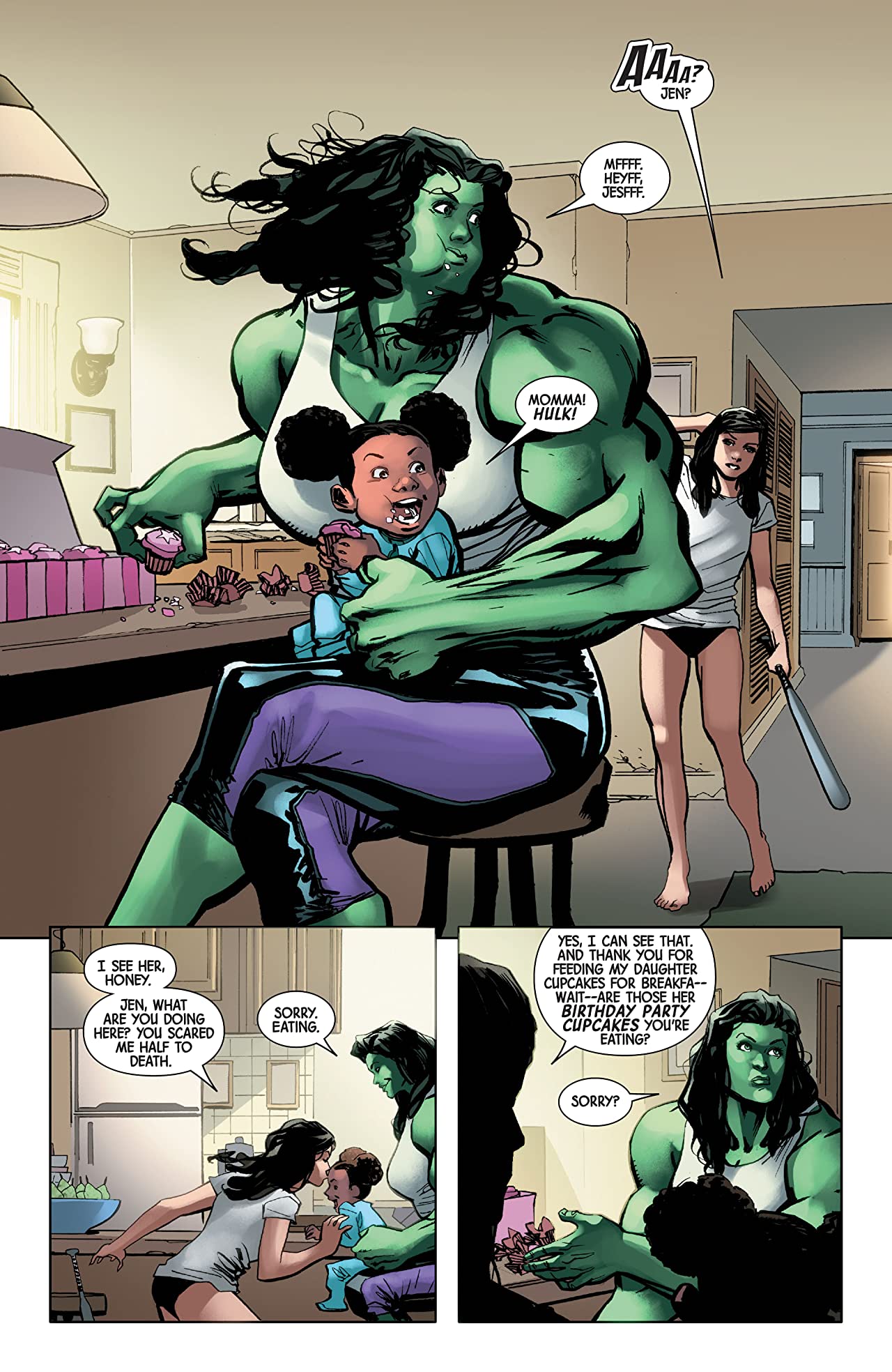 The comic relief during the Lone Shark fight was real. After facing criticism over his choice in nickname, the villain declares “I’m a Shark! I like sharks!” A fun choice was made by the creative team showing a certain gradient in Shark’s “Evilness.” After he figures out that they are planning Danielle’s party, he’s overcome with regret, indicating that he even purposefully waited for the babysitter to take the child before he enacted his revenge. “It’s a real jerk that ruins a kid’s birthday party.” The other humorous creative choice was more visual. An ongoing theme has been shots of characters through Jones’ eyes with certain aspects highlighted and described to illustrate her observational powers. They were serious and insightful in the previous arc where this issue has descriptions such as “Excellent Abs” and “A Shark in my Goddamn Home.”

This creative team has a wonderful handle on Jessica Jones. I couldn’t have asked for a better story from the original creative team that put her on the map. My suspicions that the rest of the arc will be mostly light-hearted were absolutely dashed by the last page. I don’t know what the pandemic means for the upcoming releases, but the damn coronavirus will have picked one hell of comic to interrupt.