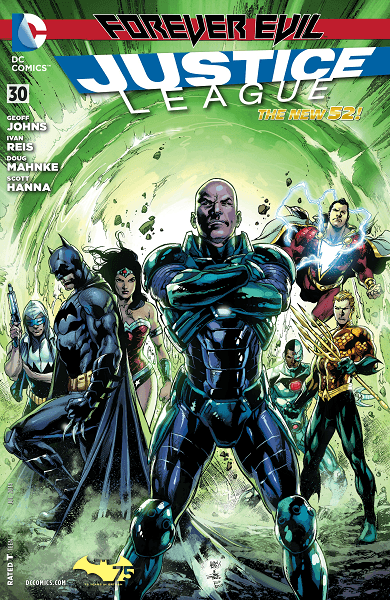 So, Forever Evil is finally wrapped…two months late…after pretty much every other book that has anything to do with the series has basically spoiled it already. That alone is basically one of the biggest fails DC has committed in the past year and when you look at their laundry list of follies, that’s saying something. Having said that, not only did FE turn out to be not too bad, but it was probably the best thing to happen to Justice League during its life thus far in the New 52.

Issue #30 takes a page or two here and there to remind us of some hanging plot points left over from Forever Evil. Of course, Geoff Johns serves this all up as hints towards things to come, but the majority of the book is dedicated to Lex Luthor. After saving the world from the threat of the Crime Syndicate, “the greatest criminal mind of our time” is basically a worldwide celebrity. With fame, money, and a newly minted respectable reputation, Luthor is the man who has everything….except the thing he’s really after: an official invitation to join the Justice League. Even Batman, though still not drinking Lex’s brand of Kool-Aid, is forced to give just a little credit where it’s due. Superman, true to form, is equal parts unimpressed and mistrustful where Luthor’s alleged change of heart is concerned.

This development introduces several possibilities to put this character’s money where his mouth is. One of the things that makes Lex such an interesting figure in comics is that he really doesn’t have to be this mustache twirling, dyed in the wool thug. He’s always had the means, the mental acumen and the pure willpower to change the world for the better a dozen times over if he wanted, but could never see past his hatred of Superman long enough to get out of his way. If he really has seen the light (which we can all be sure he pretty definitely has NOT), it’ll be interesting to see his version of superheroism in action.

My only real complaint is in Johns’ characterization of Wonder Woman. As I mentioned a different review last week, when DC wants to do something different, they tend to equate “edgy” with “unlikeable.” Diana’s characterization in this regard isn’t nearly as repulsive and unreadable as Mister Terrific was in Future’s End, but instead of being the somewhat headstrong member of the Trinity, she just comes across as an angry bully who needs someone to hit (or kill) because people suck. Ivan Reis and Doug Mahnke share artwork duties this time around and they give a pretty damn good effort. One standout page is a scene in which Wonder Woman needs somewhere to take out her aggression and an evildoer picks the absolute wrong moment to….well…do evil.