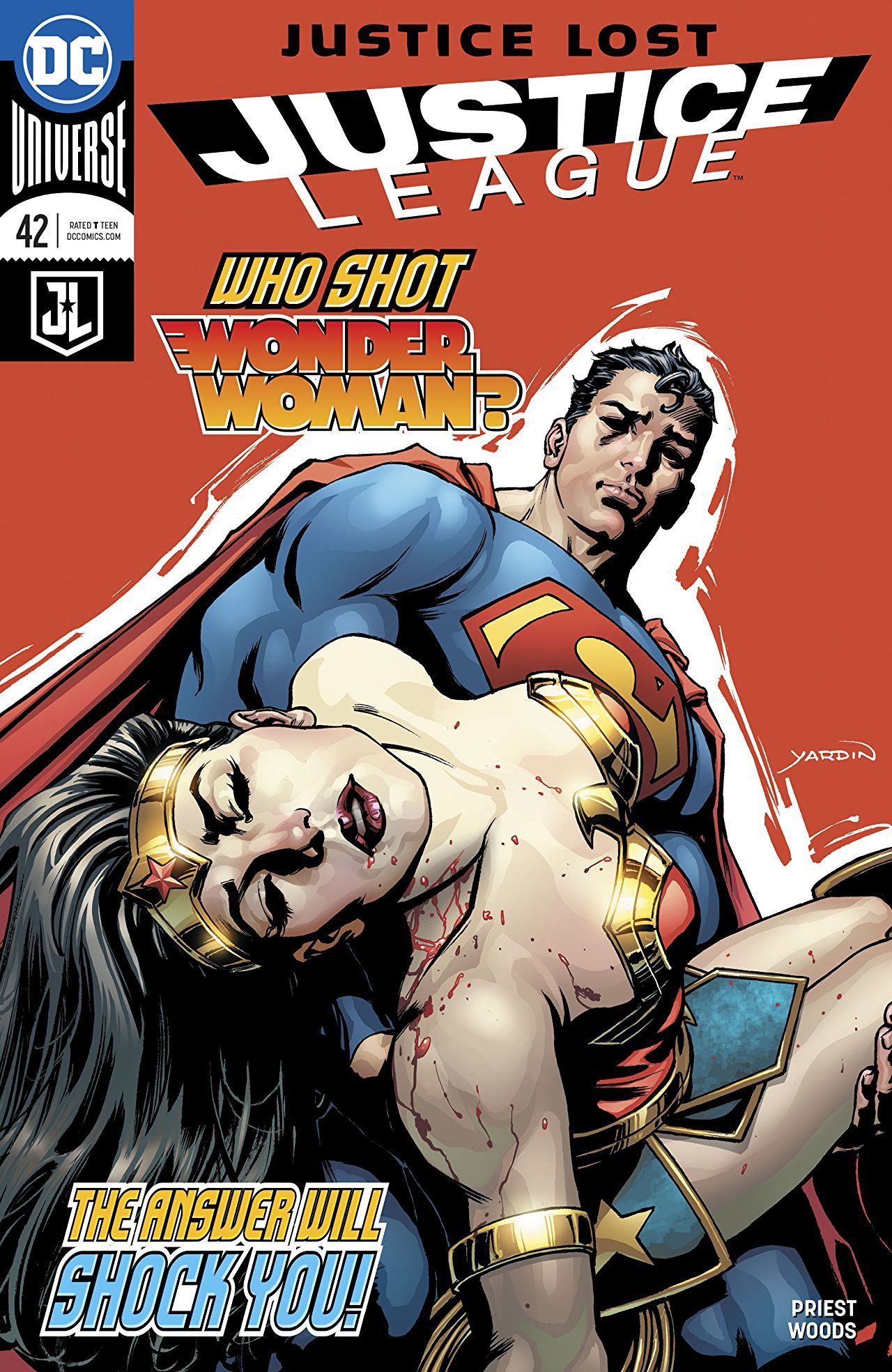 Okay so… Priest is lowkey trolling us with that cover. Wonder Woman getting shot is definitely addressed, but I wouldn’t call the mystery of who shot her an integral piece of this issue. But I guess when your story is structured in vignettes that can almost stand on their own, then coming up with a cover could be difficult.

Priest is a master at Vignettes. It takes some getting used to, but once you’re onboard with the format, it becomes such an integral part of the storytelling. Each one has a title panel that informs the theme. It enhances the relationship that dialogue and narration have by adding an unexpected layer. At their best, it’s like all three are speaking to each other.

I think piecing the story together that way lends to this run having a really high re-readability factor because each vignette follows a certain character. When it’s all said and done, I’d like to go back to the beginning and read each section on its own to see how or if the story feels any different.

Above all that, this run has officially entered its endgame. For the past few weeks, Priest has set up a certain path for the resolution to follow. I wouldn’t call it predictable, but he definitely left some breadcrumbs with each issue that lead the reader in a certain direction.

But lemme tell you: Priest only wanted you to think the story was going a certain way. He has other plans. Everything you thought was gonna happen is completely subverted. Everything you thought mattered, doesn’t. And the new threat, while shocking, isn’t even really surprising when you stop to think about how it all came to this. It’s really become a story about the league not being able to get out of their own way for the greater good. And they might not be able to come back from this once the ashes settle.

We’ve come a long way since issue #34. I was talkin’ mad shit when Priest first took over, but I have been proven wrong time and time again. This run is the epitome of a writer having everything meticulously thought out.

Pete Woods is back on art. For the past month and a half or so, it’s gone back and forth between him and a few other artists. But his art fits this iteration the best. Especially with his redesign of Cyborg, it’s made him more updated and sleek, and it’s given a visual representation of his agency. He doesn’t look like the clunky “more machine than man” type anymore. He looks like a dude with augments who is more at peace with his appearance. Before, though I’ve always liked Cyborg’s design, he looked like a man that was trapped, rather than someone who used his disadvantage to his advantage.

Priest and Woods deliver a jaw-dropping but in hindsight logical twist that completely subverts the trajectory of the story. We’ve got one more issue in this Priest/Woods run and I’m really excited to see how it all unfolds. I’m pretty sure things aren’t gonna be wrapped up in a nice little bow.