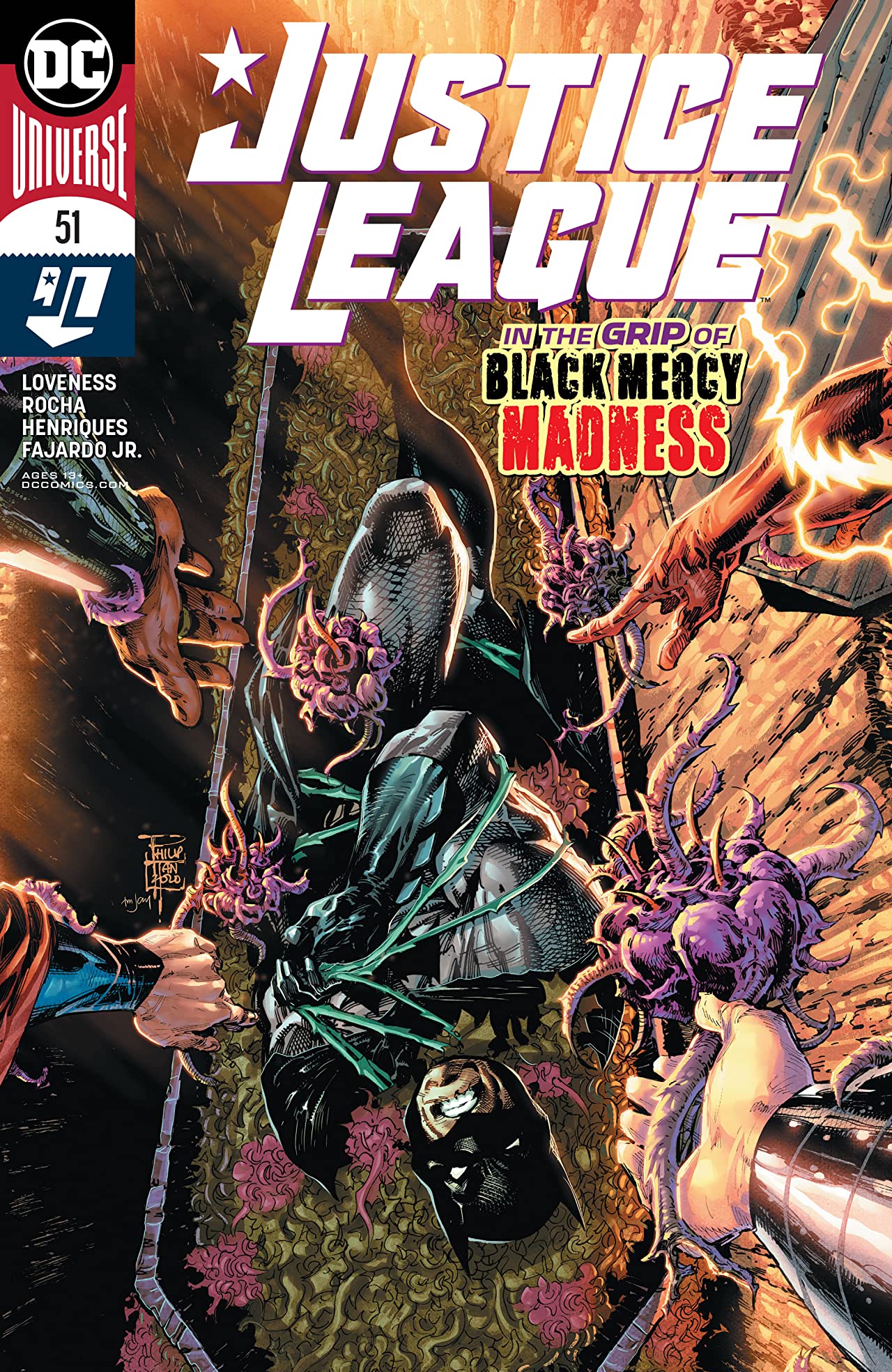 The last Justice League issue I reviewed was issue 48, where I wrongly stated that that three-issue arc was the last one before a new creative team took over the book for its tie-in to the current Dark Nights: Death Metal event. I lied. And I’m sorry. This is the final arc before that new creative team takes the helm. It’ll be two issues, and I promise I’m telling the truth this time.

Off the heels of their time helping out the Trotha, the Justice League heads back to Earth. But their ship takes them to another part of space that they didn’t chart in their systems. What’s there to meet them? The parasitic plant known as Black Mercy. You might remember this hallucination inducing organism from the famous Superman story “For The Man Who Has Everything” and from the Justice League Unlimited episode of the same name.

Black Mercy latches on to its victims and provides them with a hyper-realistic dream state featuring their biggest desires. In the original story, Black Mercy showed Superman what life would have been like if Krypton never exploded.

With that context in mind, it’s easy to assume what we’re about to see with the Justice League.

This introductory issue primarily focuses on the past, as panel after panel details the big moments in the Justice League’s individual lives like bullet points that have all led to this moment. There’s Barry’s death, Clark’s fight with Doomsday, and Batman’s journey into the past. It’s all there. And Loveness does a good job capturing the emotional weight of each of those moments. Rocha then beautifully brings them to life to help spark our memories. The issue’s waning pages show the team fighting Black Mercy but ultimately succumbing to its creepy tentacles, teasing the dream state that we’ll see in the next issue.

Rocha does a really good job with the way Black Mercy is conveyed on the page. The tendrils and veins look like something out of a John Carpenter movie. I’m as intrigued as I am creeped out and disgusted. In the best way possible of course.

This is a pretty good idea to send off this book before it becomes a tie-in of sorts for a grander narrative. It reminds you about the character’s past and it is going to allow you into their minds to see what they hope for the future. It’ll be a good way to say goodbye to the iteration of this book when it’s all said and done.

If you want something dark featuring the Justice League while also not having much to do with the grander stakes of the DC narrative, this is a book you’re gonna want to read.

9 Flashback Panels out of 10