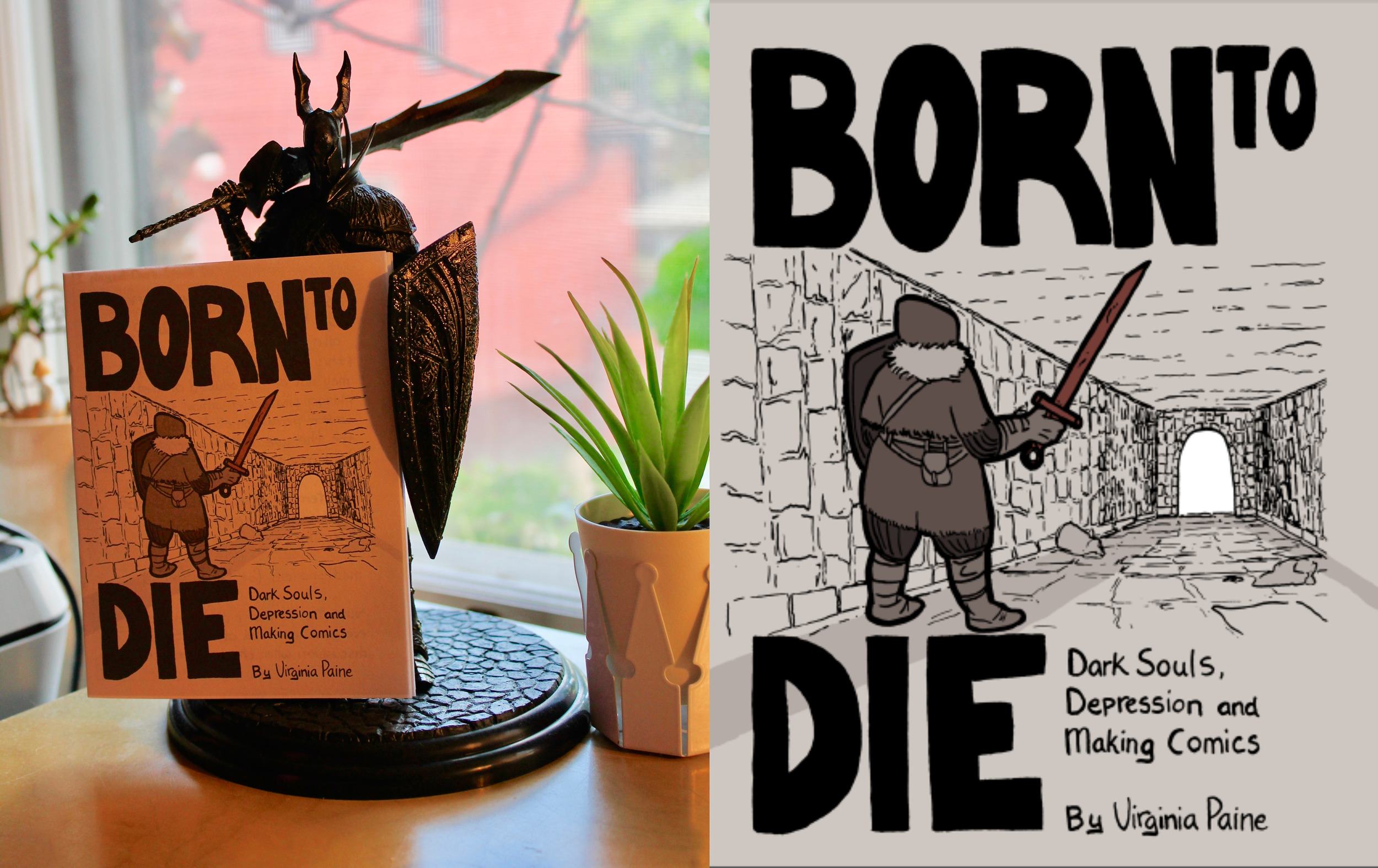 Born to Die: Dark Souls, Depressions and Making Comics is a mini-comic that tackles several topics using a narrative of playing through a video game. Not just any topics and not just any video game series, of course–creator Virginia Paine fashions her playthroughs of the first Dark Souls game in a story that mirrors her challenges she faces in real life that include living with depression and being a creative struggling for reasons to make art in dark times. Paine was thoughtful enough to include content warning for the discussion of depression and suicidal ideation and to note that are mild spoilers for Dark Souls I.

“Why is this game resonating with me so much?”

I am a Queen of RPG video games of the past (PS1 GANG, GANG), but I haven’t done much gaming lately; however, even I’ve heard of the near impossible, terribly difficult level of playing expertise needed to even attempt playing a game in the Dark Souls series. There’s a myriad of jokes and memes (even causal gamers know of the infamous ‘YOU DIED’ meme) to this effect, and Paine mentions that her decision to play was in part of how much talk there was of it being overtly difficult. So, last summer she took a crack at it and embarked on her first adventure. In my best narrator’s voice, I should tell you it wasn’t easy, and yet she played on.

Most interesting, in this narrative, was the parallels the author made of her playthroughs of Dark Souls and real-life outside her home, the real world. Page six does this perfectly with a row of images displaying her drawn avatar in a dungeon’s endless corridor slowly making her way through sitting on top of a row of images of herself, at home, struggling to create and struggling overall. “The further I progressed through the games’ hostile, recursive levels, the more familiar it felt.” Ideally, playing games, playing a video game is supposed to be some form of entertainment, of joy–yet the longer and longer she played–the more and more it became a parallel to how she felt alone, with victories small and her impact insignificant. 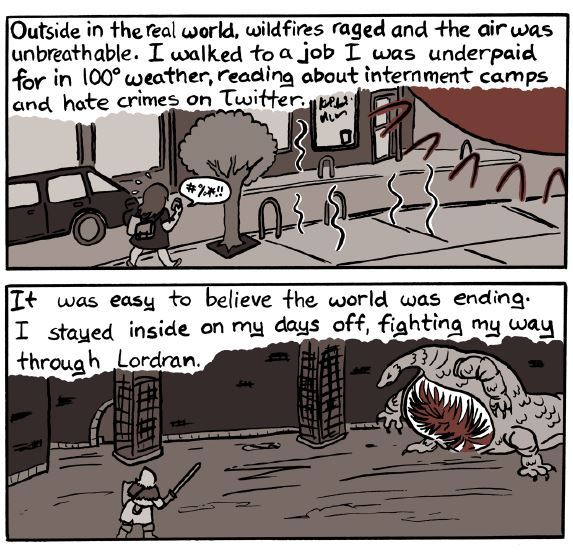 “It’s hard to see improvement when you’re in the process.”

Born to Die is a 16-page comic about the author’s first time playing Dark Souls and her experience of chronic depression. It’s not lost to me on the questioning of why do we need art and why do creatives make it, even when struggling? There is work and worth in creative work, in art, in creating comics and this is touched upon. On another brilliant page, the author quotes cartoonist Darryl Ayo on what it means to make comics. It’s a process of doing something again and again, which makes sense. Putting forth a story again and again–no matter how short or long. May it be four panels or sixteen volumes. I’ve been reading comics just about all my life, yet I’ve never seen it explained so perfectly in one sentence.

Writer Anna Borges also makes an cameo with a quote from her essay, I am not always very attached to being alive where the sub-header reads: “Chronic, passive suicidal ideation is like living in the ocean. Let’s start talking about how to tread water.” For those who deal with suicidal ideation, it is and can be an ever-present, overwhelming situation, where to live, it is suggested that one must acknowledge the stats and different ways of looking at the situation to survive. It’s also another eye-opening insight that adds to what I know and what I’ve read on folks who have struggled with suicidal thoughts and suicide, itself. 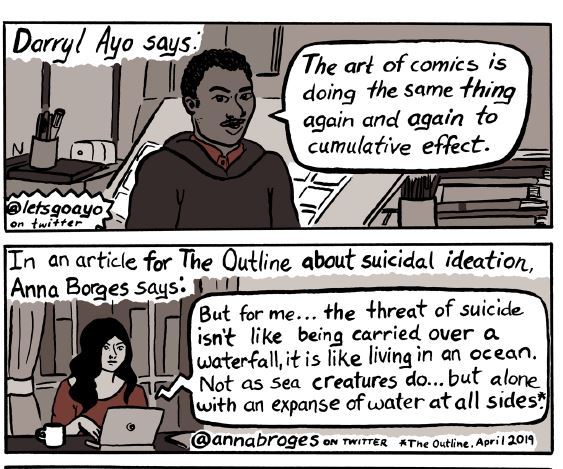 I’m really fascinated with this narrative from Paine of closely examining how artists and creatives (and gamers for that matter) can draw inspiration and lessons that pertain to their lives from a medium, from an art form that is so vilified–especially now with America’s love affair with passive action in response to mass shootings and the choice to blame it on video games. I believe this comic is worth buying and reading for the journey you take when reading when the question arises of why? Why keep playing? Why keep getting up and going to work each day? Why keep struggling through dungeon after dungeon? Why keep struggling through wave after wave of dark thoughts and relapses in self-care?

The color scheme of the comic speaks volumes too: it is mostly a muted color scheme to follow, black white and some muddy grays. The sole exception is a touch of red, darkened to perhaps resemble blood. It’s subtle, coloring a shirt, a phone case, dragon’s fire and even the “YOU DIED” text on the screen of the television. It’s not lost on me that it is red that is strikingly coloring one of the last images of the comic: of Paine’s created player sitting at a fire–alone but alive and feeding the flames. “It’s only about the repetitive, arduous tasks of keeping yourself going…The fires must be lit, even when the world has ended.”

May we find more comics that tackle the journeys artists take that honestly and genuinely detail their struggles with mental health and the reflections that we have when interacting with our favorite media texts.

May we have more work in this very visual art form–comics that places an emphasis on making comics and making art in dark times when current events sap away at us–not giving us ample time to mourn, organize, or process.

May we support more creatives who make comics who sit at fires, silent and preparing themselves to continue the work in an industry that continually demonstrates how little they are valued time and time again, especially in this year of 2019. 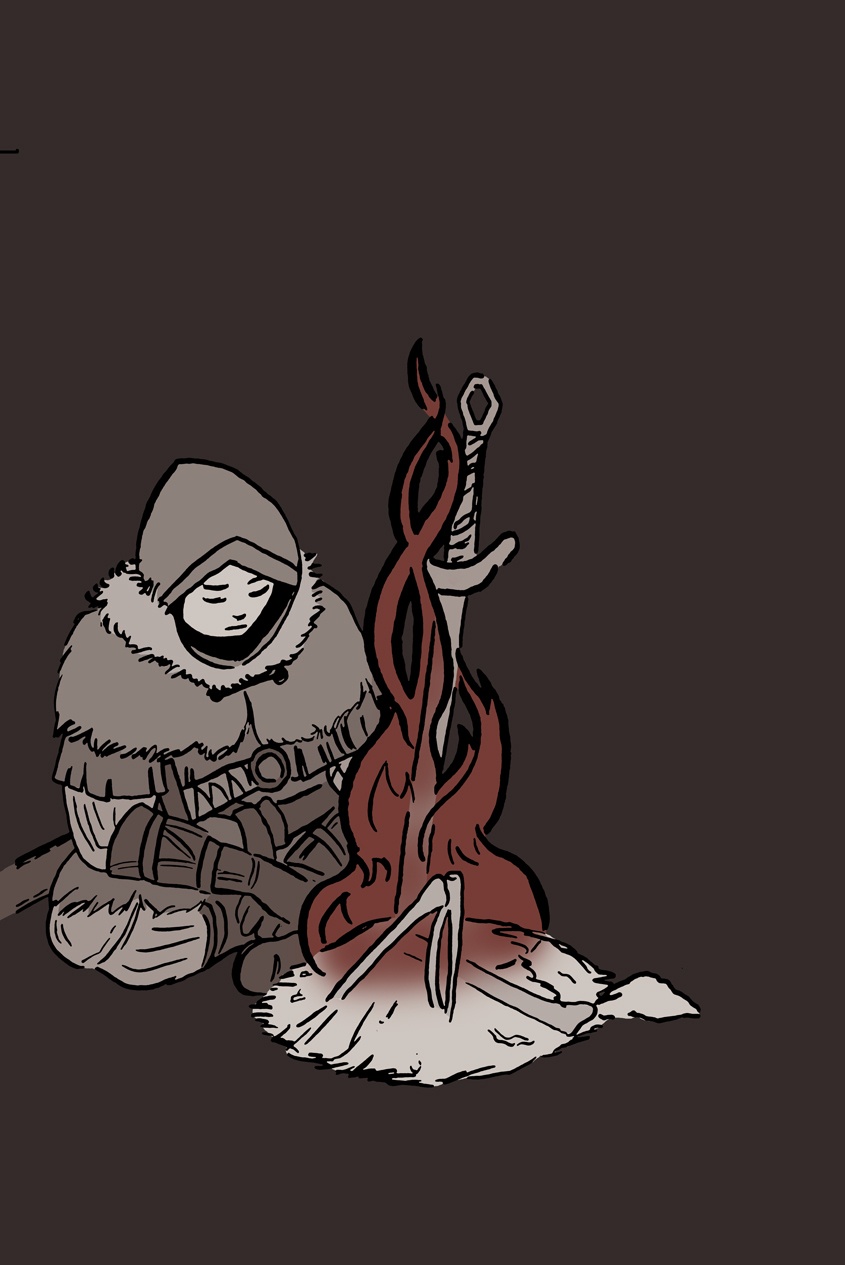 8.2 Walks Down The Stairs To The Kiln Of The First Flame Out of 10

Did you see my new comic this week? Here’s a page from it! Available as a PDF or physical zine in my shop – https://t.co/IO6UzdsLTa #comics #minicomic #darksouls #mentalhealth #depression #queerart #queercomics pic.twitter.com/gplxy94cNE

Suicidal ideation is one of the symptoms of both major depression and the depression found in bipolar disorder. Know anyone, even yourself that may be dealing with Suicidal Ideation? Read up on it, learn about triggers and even see resources for help here.