In 2002, Square Enix (Squaresoft if you nasty) brought together the most unlikely of pairings – a crossover between their various RPG characters and the iconic worlds of Disney. At the time, it was a strange idea, ridiculous even. However, creator Tetsuya Nomura created an action RPG that was simple, fun, and took great care in recreating the fantastical worlds of Disney.

It’s been more than 17 years since that first magical mashup, spawning several convoluted spinoffs, prequels, and sequels. However, the wait between Kingdom Hearts 2 and another mainline sequel has been long. It’s a bit of an understatement to say that the series is beloved. Now that Kingdom Hearts 3 has arrived, there are plenty of expectations to be met.

Kingdom Hearts 3 is the combination of every game that’s come before it, plus some new ideas that inject a lot of fun into the series. However, a lot of the series’ most notable faults still remain in this installment. Also, the game tries to wrap up every lingering plot thread from its 7+ catalog of games, which works against it in so many ways. It’s not perfect, but Kingdom Hearts 3 is a wild ride through many of Disney’s most notable franchises and still maintains its charm despite its convoluted premise.

When you boil it down, the Kingdom Hearts series is about a group of warriors who protect the light in people’s hearts using special weapons called Keyblades. The appeal of this fantasy tale of hearts, light, and darkness, comes from the series’ use of famous Disney movies as its backdrop. It’s a fairly abstract concept that creator Tetsuya Nomura tries to make more and more concrete with every entry but never truly manifests into anything completely coherent. 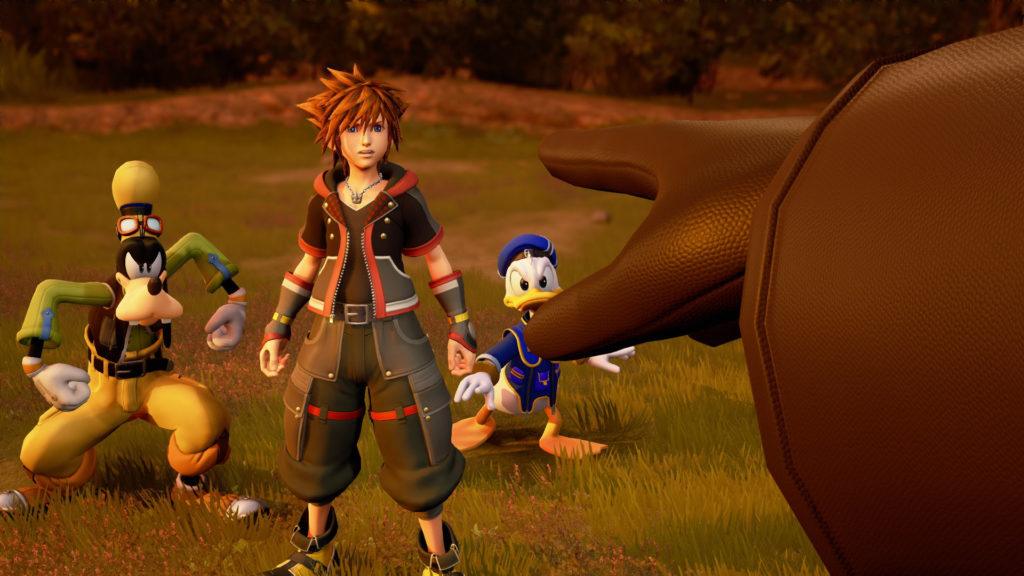 Like I mentioned before, Kingdom Hearts 3’s story is the culmination of every spin-off, prequel, and sequel before it. To say that playing all of these games is “required reading,” so to speak, is an understatement. Hell, even as someone who has played almost all of the entries in the Kingdom Hearts series, I often found myself lost in the mix of exactly just what was going on. In some respect, the creators are aware of the series’ more complex ideas and story. They go so far as to add brief video recaps for newcomers or players who are a bit hazy on the events of the last few games. The videos are helpful. Not so much that the story reaches any kind of logical sense, but helpful for those who want to know the story so far.

The premise of Kingdom Hearts 3 pits Sora and friends against a newly revitalized Organization XIII. All this while trying to save former Keyblade Masters who fell to the darkness and friends they’ve made along the way. The game jumps right into the mix as Sora needs to recover his lost power in order to be ready for the final battle. Along the way, the game preaches philosophically about matters of the heart, fighting for your friends and never giving in to the darkness. I can’t say that you’ll understand everything that is going on. Sometimes, it feels like even the story and characters don’t have any idea what is happening or how. 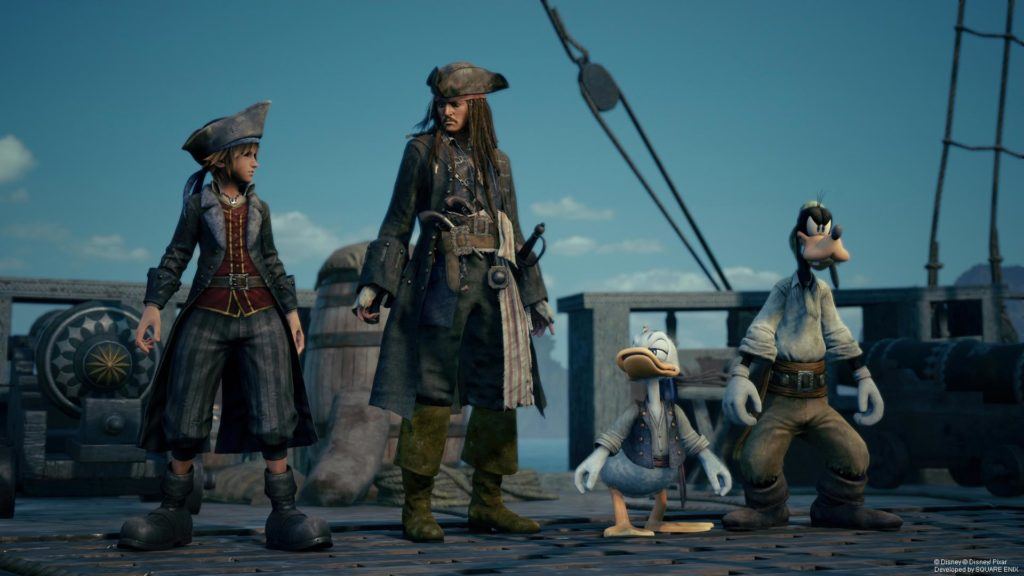 What I can say about the story is that, like most other Kingdom Hearts games, it works best when you appreciate it for the concept: a game where you can play through many of Disney’s most famous worlds. Injecting Kingdom Hearts characters into and recreating the plots from famous movies like Tangled, Toy Story, Monster’s Inc and more is where the game excels. In some worlds, you completely play out the events of their respective movie, while others create new stories that act as pseudo-sequels. There’s a certain appeal to reliving some of your favorite Disney movie moments, as well as seeing Kingdom Hearts’ themes of the heart and friendship mesh so well with those worlds.

You’ll spend a lot of your time with main characters Sora, Donald, and Goofy. They all feel right at home next to these Disney characters, despite the oddity of them taking an active role in stories we already know so well. Now, voice acting is a mixed bag. Many of the voice actors return to reprise their movie roles, while other voice actors do a decent job of imitating the roles of famous actors. It is amazing how similar they sound to the movies;; it’s almost indistinguishable. However, the dialogue holds that amazing VA work back. It can often feel clunky and cheesy, especially the parts of the story that don’t take place in any Disney world. 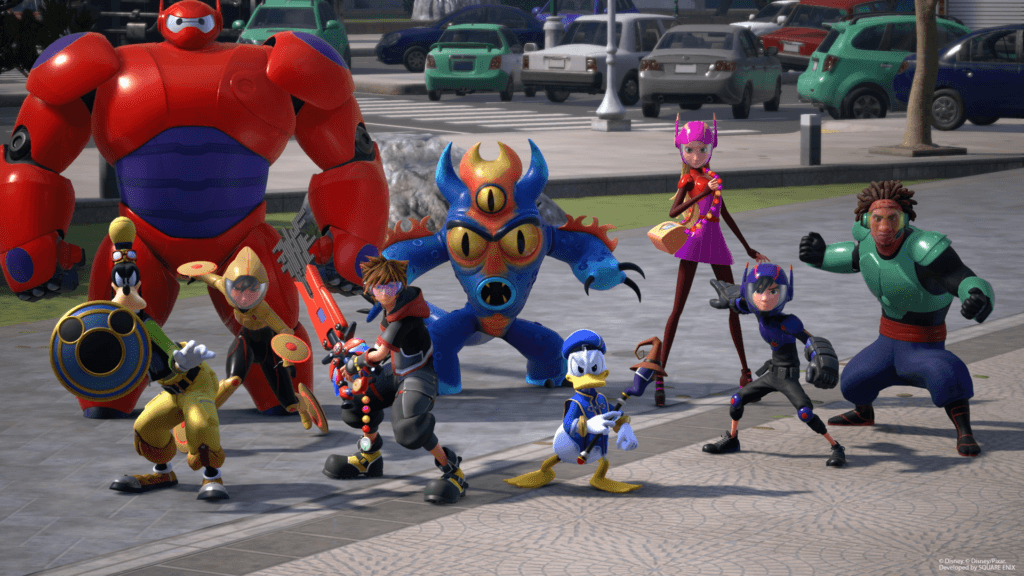 The best way to enjoy the narrative is to not pay attention too hard. You’ll only end up giving yourself a headache and it isn’t worth it. However, Kingdom Hearts excels at giving players a chance to take part in their favorite stories and does an excellent job of recreating the setting, music, and feel of these worlds.

The Kingdom Hearts series has always featured some of the best action-rpg gameplay around. The best part is that it has a lot of depth while being easy to understand. It’s great for newcomers and it’s everything fans love about the series. Kingdom Hearts 3 doesn’t exactly break the mold with its gameplay. However, it does prioritize the player experience – mainly having fun. 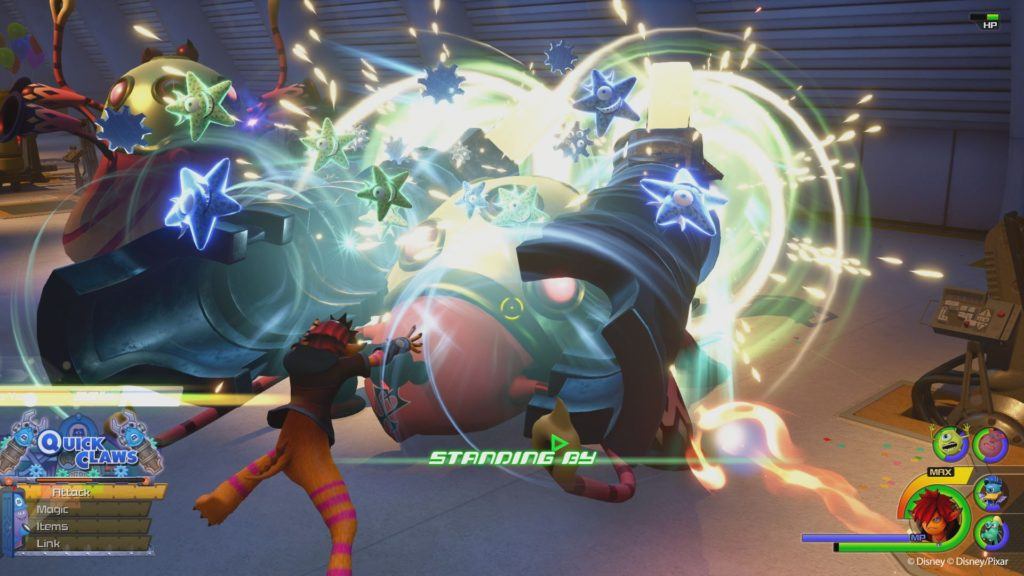 Gameplay for Kingdom Hearts is simple. You run around and bash enemies with your keyblade. Along the way, you’ll always have your party members Donald and Goofy to help out. Occasionally, you’ll have a few guest party members joining you. It depends on the world you’re visiting at the time. If you are familiar with how all of this works, then little has changed with the formula. My only gripe with the core combat is an issue that has plagued the series since the beginning – spotty camera. The action is so fast and frantic that targeting specific enemies becomes far more of a hassle than it should be. You end up randomly attacking everything in your path and panning the camera every direction just to try and focus on something. 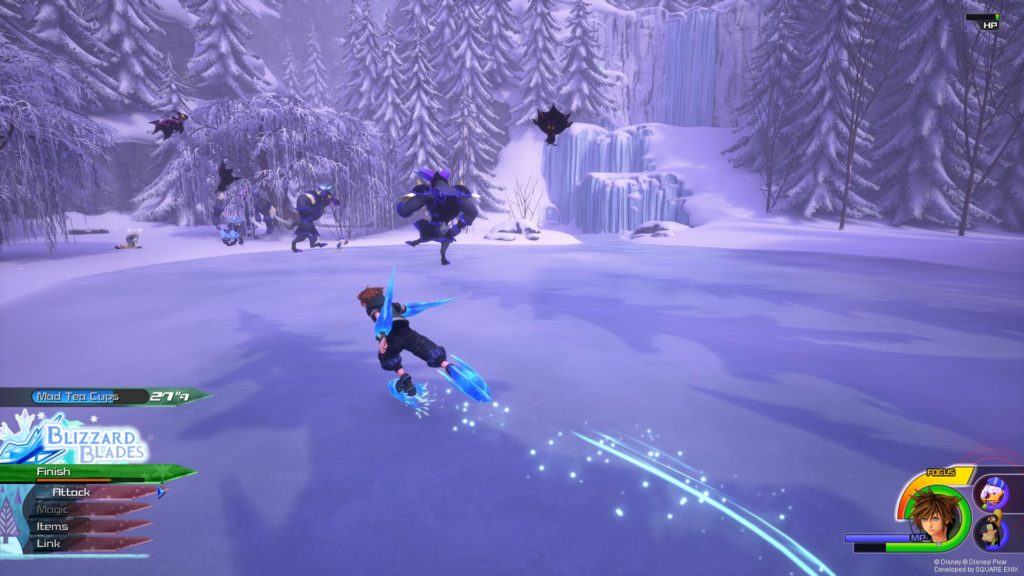 While the camera controls are irritating, they are only a minor inconvenience. The developers added little tweaks and additions inspired from the other games in the series to keep that hack and slash style gameplay feeling fresh. Around every corner, in every world, there is always something to keep the player engaged in basically fighting the same hordes of Heartless, Nobodies, and Unversed.

Fan favorite elements, the Shotlock, and Flowmotion systems, from games like Birth by Sleep and Dream Drop Distance make a return. These are definitely welcome additions. The Shotlock system is the perfect option for players who need to keep their distance and attack multiple enemies at once. Meanwhile, Flowmotion takes full advantage of the game’s larger environments, giving players the ability to explore by running up and across all manners of walls and leaping to high ledges. Flowmotion can even use the environment to attack enemies. While players still navigate through pretty linear levels, it feels less restricted due to Flowmotion granting players the freedom to explore every inch. 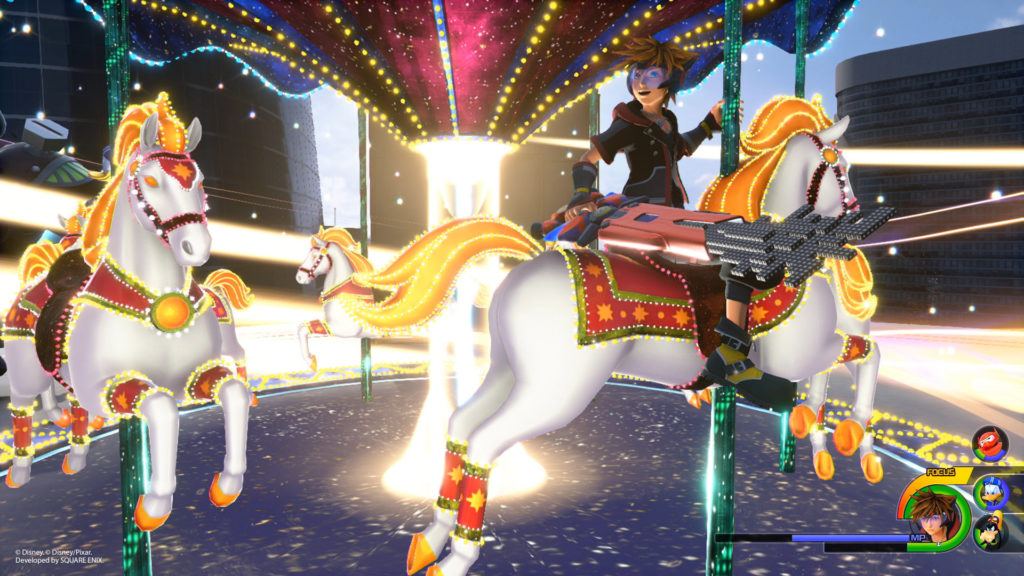 New to Kingdom Hearts 3 and perhaps the biggest changes to the gameplay are the Attraction Flow and Formchanges. Attraction Flows are the newest addition to the game, inspired by the theme park rides of Disney World and Disney Land. Once activated, Sora, Donald, and Goofy are able to use the Pirate Ship, Tea Cup, Roller Coaster and other rides to deal huge damage to enemies. It’s truly a lot of fun to access these summons and breaks up the momentum of just chipping away and bashing enemies with your keyblade. They come often and players should use them wisely during battle.

Formchanges are an evolution of elements from Kingdom Hearts 2 and Birth by Sleep. By attacking enemies enough to build up a meter, players are granted the ability to change their keyblade into different forms like blasters, hammers, yo-yos and more. This plays a big role in the game as players have access to three keyblades during battle. You can switch between them with a simple button press and strategize with whichever keyblade and evolved form work for you. You are able to upgrade these keyblades as well. I found myself going back to the keyblades I liked and switching often based on the types of enemies I faced. 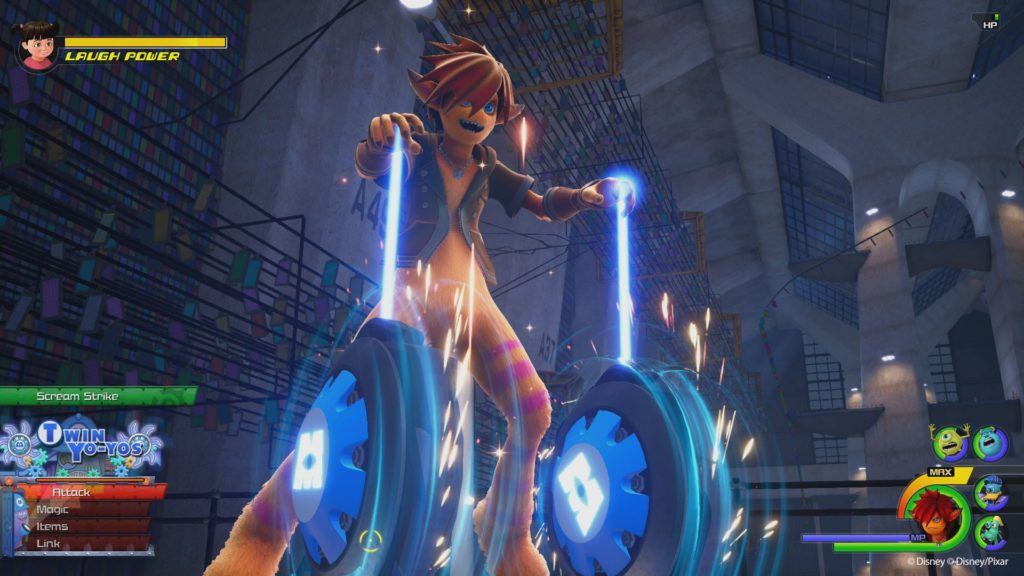 What strikes me most about the combat and gameplay is that it never felt stale. Each world provides something different. In one world you might be piloting your own mech. In the next, you’ll find yourself battling other ships out on the open sea. The variety of each world’s gameplay is great. Add in the various combat options, team attacks, gummi ship battles, mini-games and more and you’ll realize that Kingdom Hearts 3 knows how to show a player a good time.

You don’t exactly come into Kingdom Hearts 3 for the lore. If you do, you’re obviously one of those people who uses strings to make sense of some kind of conspiracy theory. However, what it lacks in logical sense, it makes up for in charm, likable characters, and (forgive the pun) a whole lot of heart. It maintains that Disney feel and prioritizes making sure players enjoy themselves. There is a disturbing lack of Final Fantasy characters in this iteration but to be honest we all come for the Disney. From beginning to end, the gameplay will keep you engaged at every turn. As the final chapter in a long saga of games, Kingdom Hearts 3 is a worthy successor, bringing together everything we love from the series and more. It’s definitely an experience you should take your time with and enjoy.