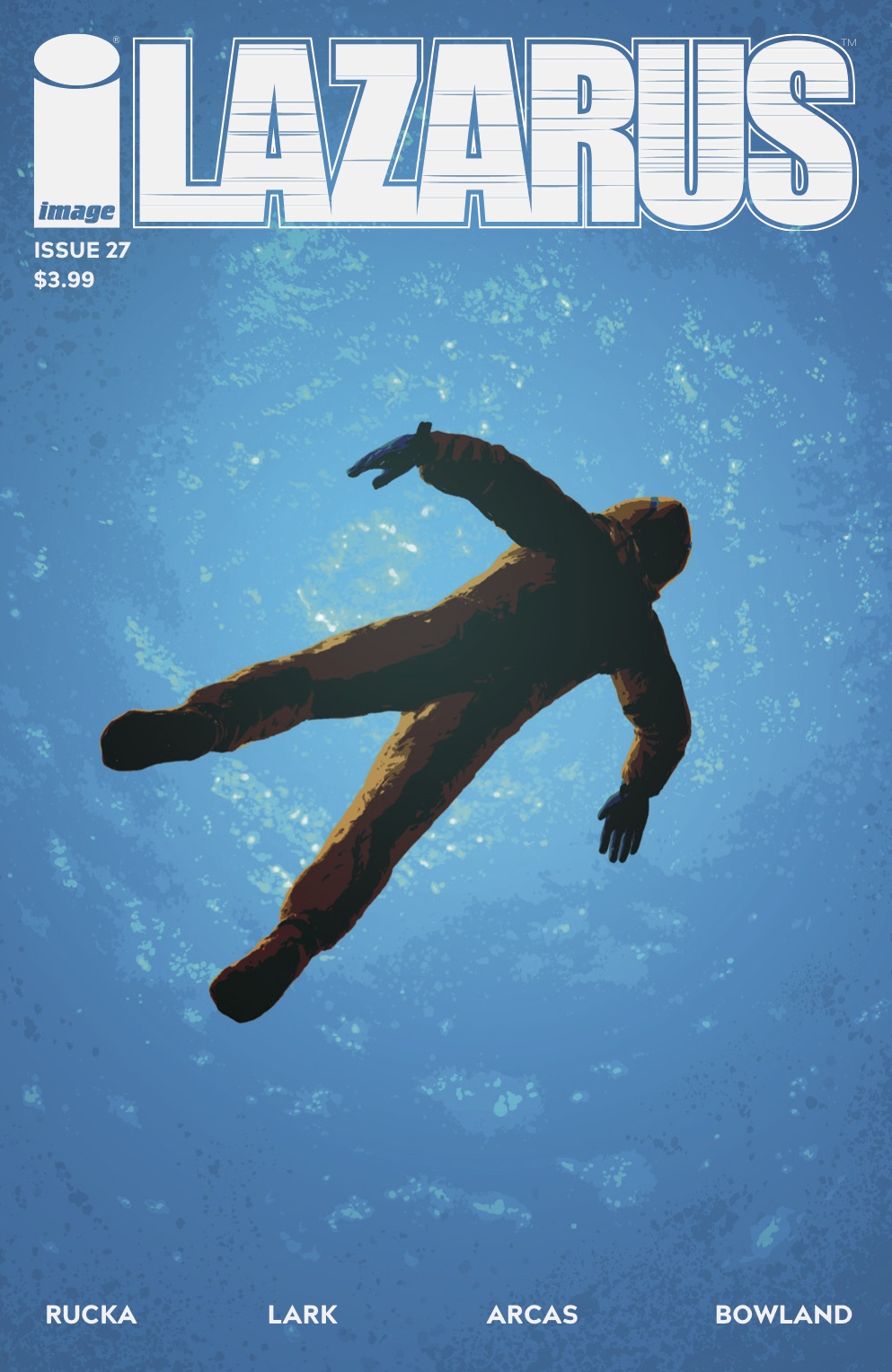 In true spirit of its title, Lazarus rises again. After issue #26’s release of the ongoing series in March 2017, Greg Rucka and Michael Lark return to continue to their dystopian epic. In the break between issues, Lark took time off for other projects, while Rucka worked with a roster of artists to release X-66, a limited series of self-contained stories of the supporting cast.  Issue 27 brings the creators back together for a new story arc –  “Fracture.”

THE DEAL WITH LAZARUS

Lazarus is a series that in many ways echoes the current day of political oligarchies, corporate monarchies, and the reality that power rests in the hands of the very few.  Writer/creator Rucka’s own pitch for the series described it as “The Godfather” meets “Children of Men.”  No statement captures the tone more perfectly. In the series, the wealth of the world is controlled only by a handful of “families”. Society itself is stratified of only of 3 classes – family, serfs, and waste. When disputes arise, each family has a chosen warrior referred to as a “Lazarus.” Forever Carlyle is the Lazarus of the Carlyle family, and the central protagonist of the entire series.

In the year X+64 the twin siblings (Jonah & Johanna) of the Carlyle family conspire to wrestle power from their father. When the coup fails, Jonah flees and takes refuge with a family enemy.  Of course, he is betrayed and ends up the subject of cruel torture and experiments. Hock returns Jonah to his family, but his father orders Forever to kill him.  Instead, Forever spares him and he reveals a major secret about his sister’s true identity. When we next find Jonah . . . 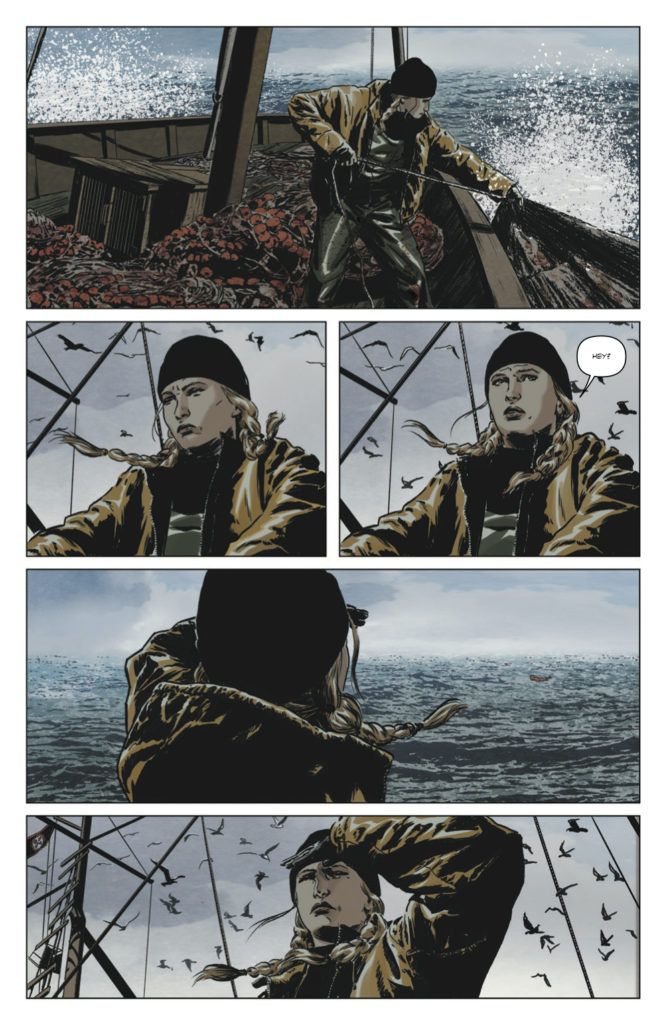 The return of the series sets its first issue in the the year X+64, not long after Jonah Carlyle threw himself into a raging North Sea.  Found floating near Denmark, he is rescued by a family of fishermen who are allied with the Family Bittner. They pull him from the freezing waters and take him into their home.  Pernille, the only daughter of the family, even uses her own body heat to help resuscitate him and fight the hypothermia. As news of the stranger pulled from the water spreads across the small town of Agger, the family receives a visit from their Anders local Bittner overseer.  He warns their patriarch, Jens, of the dangers of harboring Jonah, The family has taken to him, however, and they choose to accept him as their own.  As the story develops, Jonah integrates himself into the family – working the fishing ships, drinking beers together, and even falling in love with Pernille.

Absolutely. Reading this issue felt more sensational than anything I have experienced in some time.  The compositional choices and panel construction speak louder than words, testament to the close collaboration between Rucka and Lark. In the opening scene pictured above where the fishermen recover Jonah from the waters; one can hear the seagulls and the waves, feel the cold of the wind and the ocean.  The masterful use of pacing in this issues highlights key moments like the one above by slowing down and increasing increments of time between panels. Another highlight is the color palette of the issue: muted earth tones, with very a few saturated colors (except for the orange diving suit that Jonah is found wearing). As Jonah becomes more intertwined with his Danish family, a more saturated sunset scene frames his growing relationship with Pernille. Make no mistake, though – war is coming. This issue serves as a great tone setter and jumping-on point for new readers. 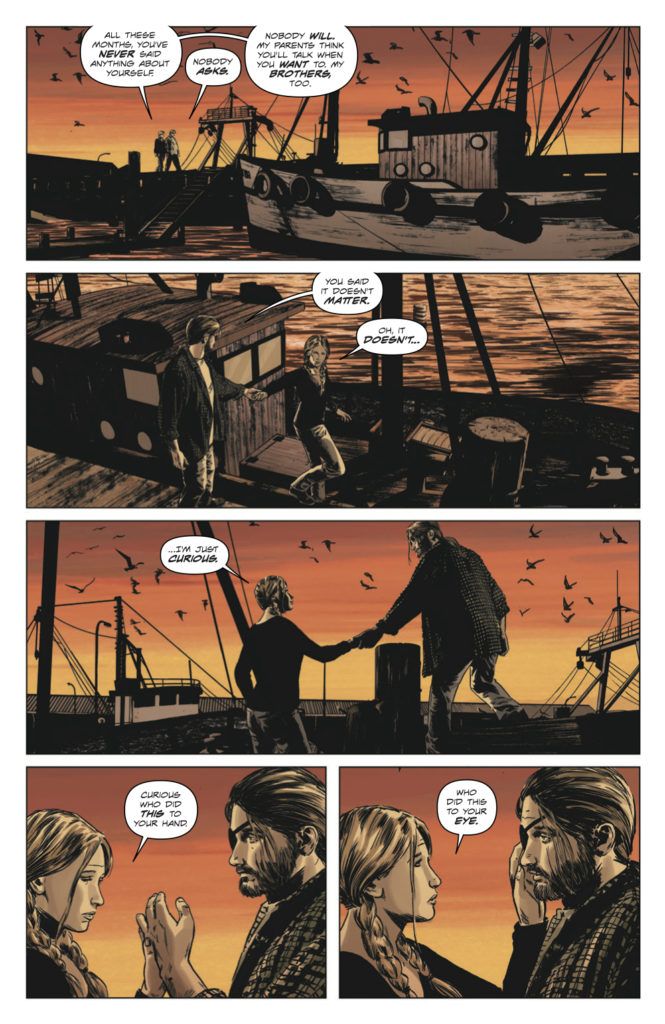 For this being my first issue of Lazarus, I am highly intrigued to see what develops further.   If “The Sopranos” meets a dystopian political epic sounds like a match made in heaven, this is the series for you.

8 Apple Danishes out of 10
Reading Lazarus? Find BNP’s other reviews of the series here.