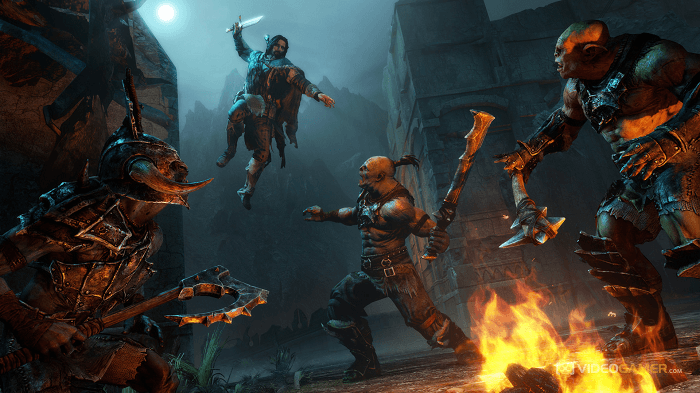 Yes, we all know what I spent my weekend doing. I couldn’t resist giving Shadow of Mordor a try once my buddy told me about The Silmarillion backbone that the game uses heavily in its story line. You start out by watching your family get slaughtered right in front of you in what seems to be a sacrifice of some sort. You then awaken as a wraith with a wraith buddy (whose identity is yet unkonwn early on in the game) that guides you throughout the game for the rest of the way. The easiest comparison to make for Shadow of Mordor’s fight mechanics is with the Assassin’s Creed series, most closely resembling Assassin’s Creed IV: Black Flag. Once we get passed that small detail, it’s easier to come to understand that this is the direction a ton of these melee combat systems are moving since Batman: Arkham Asylum hit the market back in 2010. I like to call these combat systems the, ‘push-a-button-enjoy-the-show’ phenomenon, which isn’t to say I don’t enjoy them as they usually lead to beautiful sequences but leaves a lot to be desired in terms of skill ceiling for titles who employ it.

Now, on to the interesting stuff. Middle-earth: Shadow of Mordor introduces a concept they’re calling, ‘Nemesis’. Which is as cool as it sounds and leads to loads of possibilities. When I started playing, I just jumped into combat with random orcs roaming Mordor and went after low-level captains only, to my dismay, to get my shit handed to me. I quickly found out that every time I lose, there’s consequences that alter the course of the game thereinafter. Whoever slays you is likely to get a promotion in rank and power level and they will remember you the next time they meet you in combat, this could either mean that a captain or warchief you’ve defeated before, reappears with a giant head bandage and scolds you for leaving them for dead in your last fight or it could mean that they talk a ton of shit about wiping the floor with you the last time you met and how much they look forward to doing it again. This doesn’t get redundant, either. There’s enough clever greetings included to always keep things interested when you run into a captain or warchief.

The game revolves around this, “let’s get to know each other” concept, in that you can also gather intel on captains and warchiefs that can make what would normally be a long agonizing fight end in a matter of a single blow. You can gather this essential data on your enemies by interrogating orcs, other captains and warchiefs or but investigating ‘intel’ points on the map. This opens up a list of strengths and weaknesses for each captain or warchief that you might face. It also helps quite a bit with warchiefs because they use captains as their bodyguards and the game gently nudges you in the direction of taking down bodyguards before facing off against warchiefs, another massive time and agony saver.

The landscape of Middle-earth: Shadow of Mordor is gorgeous and you’ll instantly be drawn into the beautifully choreographed combinations that you can link together while being attacked by a horde of orcs. There’s so many fight combos to learn that it can initially be a bit overwhelming to remember them all but the game does an excellent job at easing you into them with its tutorials and does a great job at reminding you that you have these skills available to you as you explore Mordor.

The is semi-open world but definitely places a emphasis on the story; in fact, you’ll need to get through a bit of the story early on before you think about doing any open world side-missions lest you enjoy the masochism of repeatedly being executed by the hordes of Uruk, Caragols, and Gruags that’ll be thrown your way. Like the Assassin’s Creed series the game does an excellent job of keeping you engaged with different methods of playing, from stealth to all out horde fights and then the occasional glory of following a high powered opponent across the map to get him in a 1 on 1 fight.

Middle-earth: Shadow of Mordor feels more like a hands-on cinematic experience and, for those of you who have the adequate hardware resources, you can enhance the visual pleasure of the game by acquiring the HD textures DLC which unlocks the ‘Ultra’ textures for the game. If you’re a PC gamer, the game is currently at a $50 price tag on steam and is more than worth the cost. You’ll have quite an introductory experience to this game before you even realize that 20 hours have passed and you should probably do something else with your life for an hour… and then return to the game. Happy orc hunting.