Editor’s note: This is an Advanced Review as Moonstruck #1 drops July 19!

I’ll be honest: as a comics fan I am always on the hunt for the next QWOC fix, and when I peeped just the description of Moonstruck #1 I damn near leapt at it. A plus-sized cup of magical queer cuteness with more than one shot of brownness? Order me the whole cafe!

If you aren’t immediately sucked in by Leth and Beagle’s visually fun and colorfully snackable artwork then our sweetheart of a main character, Julie, and her extra but endearing best friend, Chet, will certainly do the trick. Julie is just your average hardworking barista trying to date the girl of her dreams and indulge her fandom (a Nancy Drew/Bobbsey Twins-esque mystery series called Pleasant Mountain Sisters). Oh yeah, and then there’s those werewolf microaggressions everyone keeps casually throwing around. How’s a girl supposed to get any reading done when everyone from the feuding neighbors to the local oracles with their incredibly vague and foreboding prophecies seem determined to get your hackles up?

I can’t emphasize enough how important it is that these magical characters, in all of their intersections, still feel as real and relatable as someone you might meet off the street. I’m pretty sure this panel alone describes 99% of my QPOC friends: 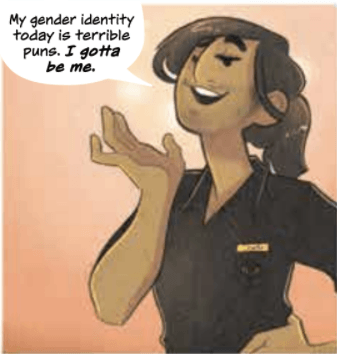 One of my number one complaints in comics is how frustratingly simple it seems to bring black and brown folks from the periphery of original narratives to the center, and Ellis’ work shows just how subtle but impactful this difference makes. For instance, for now I really like how many of the characters are ambiguously brown and dark-skinned if only to establish that their presence in a fantasy realm isn’t as outlandish as centuries of whitewashed canon will have you think. I’m even open to the kind of interpretation of race we see in works like Saga where specific inspirations have been acknowledged by the creators but don’t necessarily exist in the book’s dimension. I’m interested to see how close the parallel of Other manifests in Julie’s life and why, however, as so far she seems to be the only one that receives any kind of negativity for her abilities rather than magical beings in general which is more often the case. 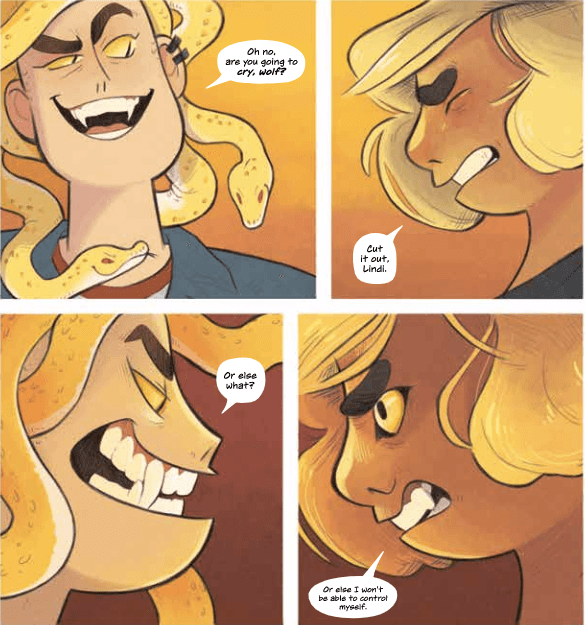 I’m definitely a fan of portraying different body types, too, and not just by “cheating” with Chet’s centaur nature or the various shapeshifting that occurs throughout the story; Julie’s short round pear shape, Lindi’s tall, blocky frame, and Cass’ thin and long body all demonstrate how characters that use “she” pronouns don’t all have to be perfectly hourglass or even the exact same design. Also, if the current in-world conversations are any indication, we can safely assume most if not all of our cast falls somewhere beneath the LGBTQIA+ umbrella and I’m really excited to see if Ellis includes underrepresented identities like asexuals, aromantics, people whose romantic and sexual orientations don’t align, and (more?) trans and gender non-conforming folks.


[divider type=”space_thin”]
If you’re somehow still not convinced, as if this amazing story weren’t enough, you can check out the creators stepping up to be real representative and allies in their response to Image Comics’ recent apology for their distasteful and triggering cover as well as blatant transphobia. As a brand new title I’m not sure what taking such a vocal stance could do to their series, as it shows a priority for the creators trying to change the industry both with their art and their voices. For now let’s hope that we all get a chance to taste a slice of this sweet, sweet magic on the book’s intended debut, July 19th.
8.7 lattes out of 10