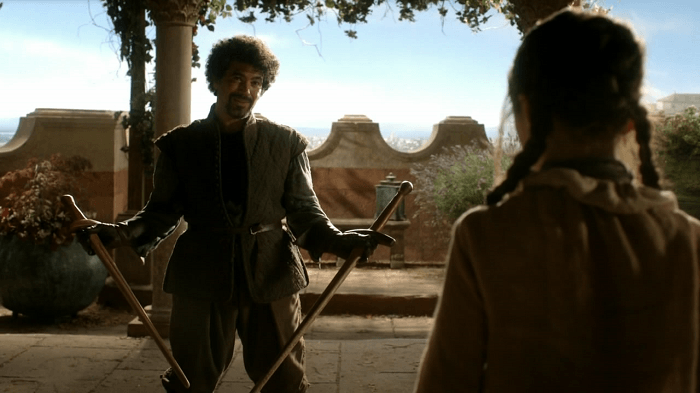 Arya is my favorite character on the show. Full stop. Most stories that center around a “tomboy” typically revert back to type where the girl “grows out of” the behavior that isn’t considered feminine or lady like by tale’s end. Fam, Arya is never walking that path. While her sister learned the hard way that fairy tales aren’t real, Arya rejected them before that point was ever proven to her. She had no desire to marry a Lord, be subservient to anyone or conform to the gestures and traditions of the land. Instead of a needle and thread for quilting, she named her short sword, “Needle.” Instead of learning to curtsy and carry herself like a lady, she was chasing cats down near the dungeons to improve her footwork. Arya ain’t here for the soft shit, fam.

My favorite scene is really a work of Television art. Seeing the frustrations of his daughter and not trying to shoehorn her into the Sansa path, Ned Stark hires Arya a “dancing master.” The one and only Syrio Forel, first sword of Braavos. Three big reasons this scene is still the best isolated scene in Game of Thrones. First, Syrio’s dialogue is spot on and fun. He is the hardcore fill in the blank instructor with plenty of flair and theatrics. He teaches Arya about two lessons per line for most of his monologue. Second, the challenging of gender norms is awesome too.

Syrio: You must listen to me, boy.

Syrio: Boy, girl. You are sword. That is all.

The instant chemistry on screen is palpable. This also one of the last times we see Arya happy, which is crazy considering that it’s only the third episode of the show. But the lesson is so earnest, watching Arya fail and be happy to do it. Watching Syrio hand out the lessons with the appropriate recourse.

Of course what clinches this scene is the appearance of Ned at the end. For a very brief moment, he is thoroughly enjoying watching his daughter enjoy herself. But quickly, as the direction indicates, Ned doesn’t see his baby girl learning sword fighting as recreation any more. While the lesson is being taught with wooden swords, Ned hears the clash of steel on steel and the realization is clear. Everything; coming to King’s Landing, bringing his daughters with him and introducing his youngest daughter to this art form was a terrible, terrible mistake. Some think Ned is having flashbacks of the war he fought in, to take King’s Landing for Robert Baratheon. I think Ned is seeing the future in his child being taught lesson after lesson at the end of the sword. War is coming. Winter is coming and nobody is safe.