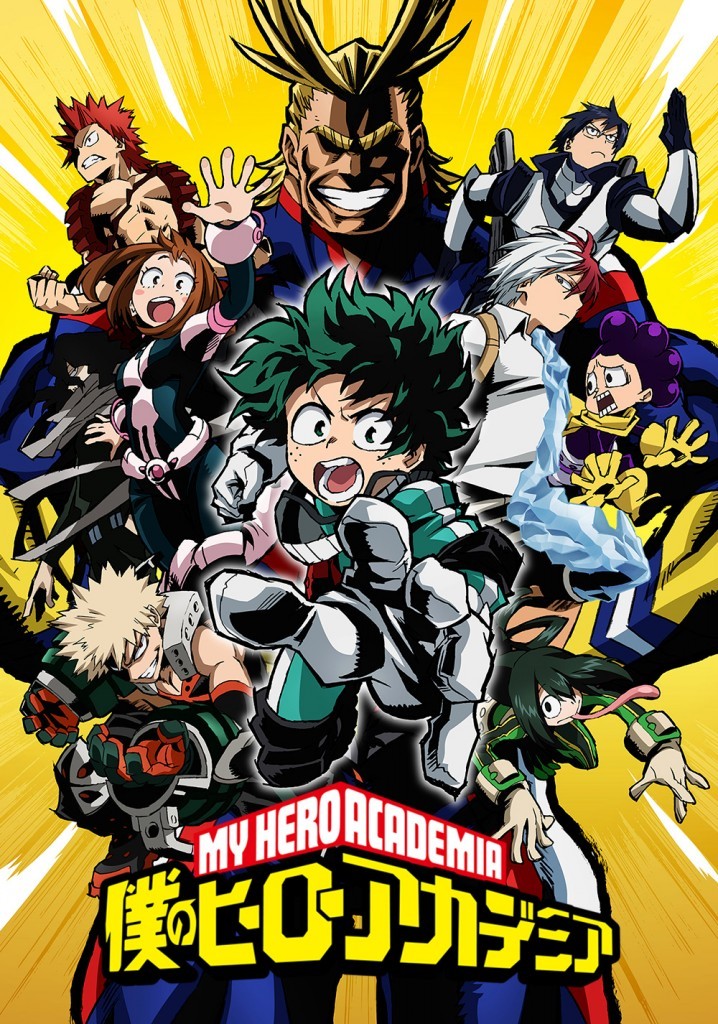 It’s time for another anime recommendation from yours truly. Have I gained your trust yet? Are we drift compatible? Let’s go kill some giant monsters together. This time, I bring you a show called My Hero Academia “Boku no Hīrō Akademia” that combines one of my favorite things and one of my least favorite things. It brings superheroes and school together, guess which one I hate and which one I love. Now while this formula has been done before in movies and other things, this show does set itself apart. So without further ado, Blue skidoo we can too!

My Hero Academia follows a boy named Izuku Midoriya who is an extremely normal kid with extremely normal green hair. The world is full of people with “Quirks” or superpowers that manifest inside you at a young age. He’s constantly picked on for not having a quirk and despite his shortcomings he dreams of being a hero. He dreams of attending U.A. High School (a school that develops heroes) to follow in the footsteps of his own hero, and also the number 1 hero in the world, All Might!

Oh, there’s a hero ranking system, All Might is number 1, no big deal. Everyone tells Izuku he can’t do it, even his mom has doubts. You know you’re climbing an uphill battle when your mom is like “Nahhh better not.” His childhood friend and ironically childhood bully, Katsuki Bakugou constantly berates Izuku constantly. He makes Izuku feel weak, humiliated and small. Oh, Katsuki has an amazing explosive quirk, like the most powerful rookie quirk, no big deal.

Soon after we’re introduced to our main characters, Izuku is attacked by a villain and saved by our number 1 hero All Might! After Izuku almost explodes from fan-boying so hard, he tells All Might about his dream to become a hero just like him. All Might dishearteningly tells him that he should give up his dream, especially since he doesn’t have a Quirk. Izuku can’t believe that his hero is telling him not to go for his dream. After he’s all but given up on his dream, the villain that All Might seemingly defeated was back with a vengeance and captures his childhood friend/bully Katsuki. Heroes were being defeated one after the other and after Izuku saw how much pain his bully bud was in he rushed into action. He sprung at the villain and with no quirk he gave it his all to help.

He’s thinking to himself “Why did I rush in? Why did I do this? Why? Why? Why?” The answer is simple. It’s because he’s already a hero at heart. After that gets settled All Might talks to Izuku again and exclaims how wrong he was. He shows Izuku his quirk “All For One” and is willing to share it with him so he can try to achieve his dream of becoming a hero. There’s the summary of the first two episodes. A lot happens in them. This show is pretty good even in the first couple of episodes and it hadn’t even gotten to the “good stuff” yet. Izuku is full of so much emotion and passion that it might be a little overwhelming for you at first, and that’s ok. If you don’t want to see a male protagonist cry then you’re going to hate him. Even if you hate him at first you’ll end up loving him. He has to adjust to finally being able to attain his dream. He clutches his chest in a sign of relief, he lets go of all the pain and anguish he’s been feeling all these years. After everyone told him he can’t do it, someone finally said he could, and you feel his passion. You’ll root for him. That’s just how it is.

The show follows him as he tries to get into U.A. High School and become a hero. The animation is nice and fluid and it carries the action scenes just as well as the comedic ones. Every character has something specific about them. Whether it’s their voice, their attitude, or mannerisms, no character is like the next. It takes the standard “Underdog becomes powerful” narrative and ads some new flair to it. It doesn’t take itself too seriously, but at the same time, just seriously enough. The theme of youth is overflowing and the spirit of the show is reminiscent of the “Springtime of Youth” state of mind. Not caring about the future and living in the moment. That’s the message that portrayed through out the series.

The show is planning to have 13 episodes(not entirely sure) and it’s sticking to the manga closely. I want anyone who decides to give this show or manga a try to go into it without knowing key story or action scenes even though spoiling them might give a greater incentive to invest your time into it. Just trust me, I haven’t steered you wrong yet right? I hope I haven’t. There ya go, now pull on your capes and start watching or reading.

You can watch it here.
[quote_simple] “My Deku means, You can do it!”- Midoriya, Izuku (Deku)[/quote_simple]
You might not get how great that quote is now, but after you watch a few episodes you’ll understand. You’ll understand so hard.