Between The World And Me was well on its way to being the seminal piece on comprehending modern Blackness when it was a book. What cultural luminary, and the film’s director, Kamilah Forbes has done to further elevate Ta-Nehisi Coates’ 2015 bestseller cannot be oversold. In 2019, Forbes brought Between the World And Me to The Apollo Theatre as a staged reading and talkback. One would think that presentation was its final form. How could Coates’ work be even more aligned with the present state of the Black experience? Easily. Have Kamilah Forbes direct a film adaptation that assesses the present tense of Blackness by noting the past that made it possible. Forbes’ scrapbook aesthetic is not only a cool looking opening, it intentionally connects this work to the greater narrative: addressing the legacy of systemic racism. To be frank, this refined vision of Coates’ book is a devastating and poetic treatise on the particularity of Black oppression in the United States. Part performance piece, part testimonial, and part indictment of white supremacy. All that Black persistence is exist in this film. It’s all done very intimately and in these singular moments with speakers by themselves. It hadn’t even crossed my mind that this was filmed during the pandemic

There are profound moments where the scrapbook aesthetic blossoms out into a weave of found footage. The use of the archive as an establishing shot of Blackness at large. Which, was beautiful to see since the time they are capturing, mostly the early 90s, was a time where the Black population was not yet consolidated via social media. In the vein of Raoul Peck’s use of media to bridge the gap of time in I Am Not Your Negro, Forbes uses found footage to expound upon the experience of being in ‘The Mecca’ at Howard University. It’s here that Forbes reminds us that she was schoolmates with Coates and Chadwick Boseman at Howard. Since Chadwick’s passing there have been uses of his appearances all over the Internet. Forbes honors his spirit, his integrity with the love only a comrade in arms can. She ties his 2018 speech at Howard’s commencement to land a point around Black resilience and it resonates all too well.

Coates’ book was written as a conversation between him and his kids during “the talk” Black folks have with their kids as they become adults in the eyes of the oppressor. Forbes’ film shares the performance of the text with other Black luminaries in art and activism. There is an initial strangeness that occurs when work is being read. A tone that removes you from the grounding of what is being read. I have seen it destroy a theatre performance. It does not linger long here. When Joe Morton and Alicia Garza read these words, they take on a whole new life. They cease being one person’s perspective or experience and become a communal expression of a people’s coming of age. An artistic demand for equity in a country built using non-white people as fuel and fodder. Kamilah Forbes saw a tapestry in the text of Between The World And Me and deftly sought out the performances to sew it into a salient understanding of Blackness. It’s all done very intimately and in these singular moments with speakers by themselves.

Open to the World

In the way that Audre Lorde’s Sister, Outsider and bell hooks’ (insert amazing book) still inform the Black women and femme experiences, Forbes’ imagining of Between The World And Me will inform generations to come on the radical act of Black existence. Mahershala Ali speaking the refrain, “To my daughter, on your fifteenth year.” as the real-life father of a three-year-old girl widens the scope of the film and the parts of the Black family the film speaks to. Phylicia Rashad speaking on behalf of/as the elder mother of slain college student Prince James. Each of these moments allow access to the rawness of Black pain. With none of the ham-fisted performativity of ‘trauma porn’ and all of the mastery of navigating this world as a melanated human, in a world that affords you second class citizenry.

For Between The World And Me to release just after a highly polarized election season just makes it hit harder. The reminder that nearly half of the country is in favor of white supremacy underlines the core narrative: Ta-Nehisi coming to terms with the police murder of his college friend and sharing his process with his only son. Police murders of Black and Brown bodies have been a measure of how racist a place is. This book was written in 2015 and the list of stolen lives inevitably grew from then to 2020. Forbes and Coates do us all justice with the necessary and timely inclusion of Breonna Taylor’s murder to the narrative. Not just to the narrative of Coates’ piece of text, but to the narrative of Black history. Between The World And Me is a must-read book, and as director Kamilah Forbes has made this a must-see film. The whole country needs to watch this and learn. We’ll have that chance when it premieres on Saturday, November 21st at 8:00PM ET on HBO and HBO MAX. 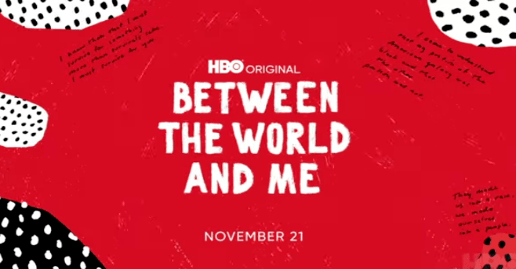