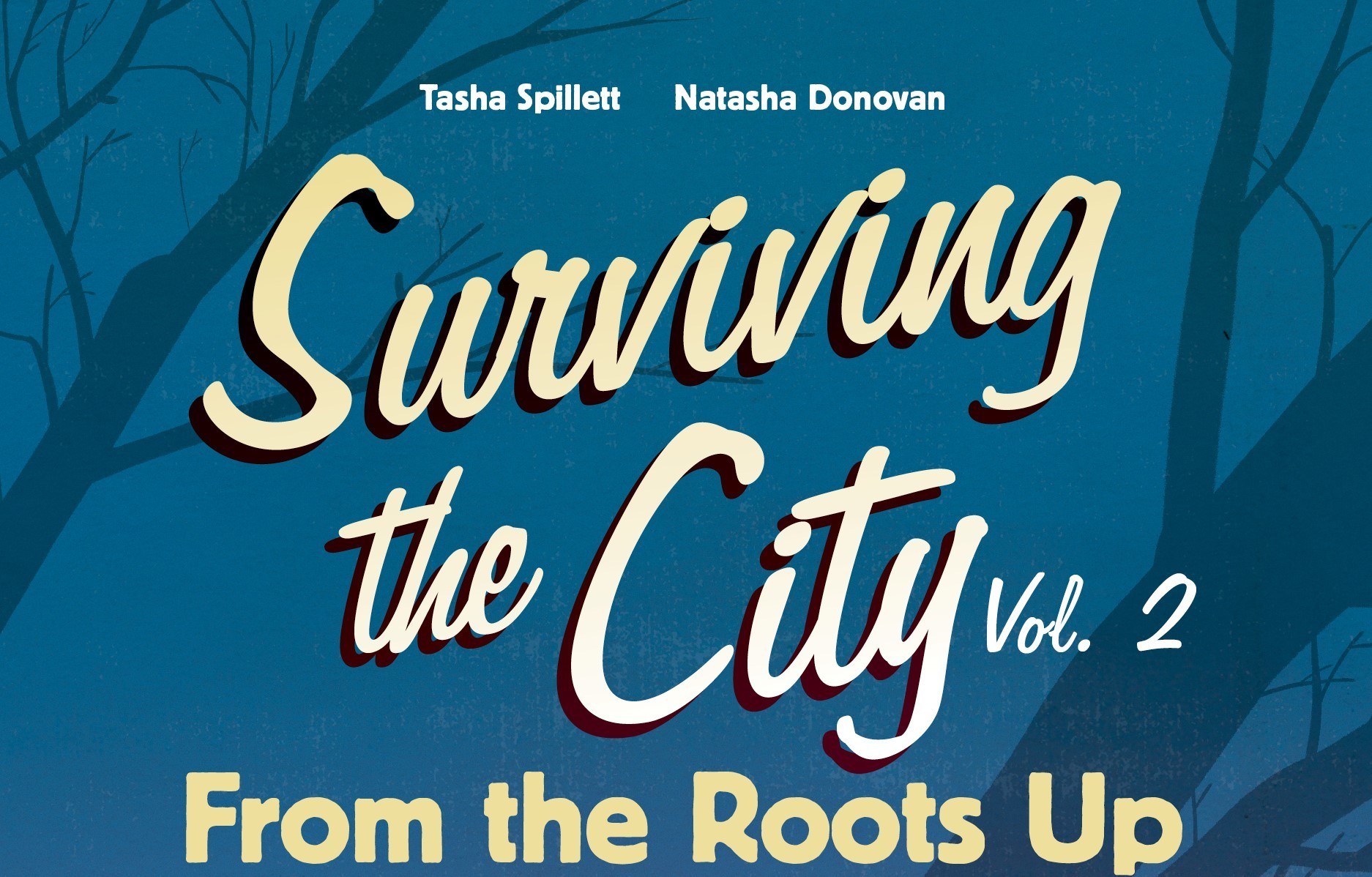 Just in time for Women’s History month last year came the release and publishing of Surviving the City from Portage & Main Press centering a group that we rarely see represented anywhere in most media: Indigenous people and especially Indigenous girls and women. It was the first volume of this series centering on two friends: Miikwan who is Anishinaabe and Dez who is Inninew.

The first graphic novel introduced them and chronicled their struggles not only being young but Indigenous young women navigating a world that historically hasn’t been kind to those who look like them. What I loved most about that book? It felt like a love letter from Indigenous women to Indigenous girls, letting them know that they are seen and that they are loved. So when I heard about the sequel, of course, I wanted to read more!

Best friends Dez and Miikwan’s stories continue in this sequel to the award-winning graphic novel Surviving the City, Vol. 1. The first volume closed on such a perfect note and this volume opens to change, to transition. Dez is going through it, her kokum, her grandmother has finally succumbed to her health problems and has passed. Dez is having serious problems with the change–living in a group home for teens: she’s lonely, grieving, and feeling alone in the world without a true home. She feels cut off, cut away from the person she loved most in this earthly plane of existence, and I could just feel the heartbreak from the pages. She’s not without a support system: her best friend Miikwan, a new friend at the place she’s staying at and of course, Elder Geraldine, but she still feels out of place–for more reasons than one.

Miikwan’s story arc revolves around finding new friends, new faces, and her quest to not only be a good friend to Dez but work her way to being a better ally and advocate. In the first volume, she was reeling with the death of her mother ( hinted that her mother was a victim of some senseless act of violence, a reality for many Native women here in the U.S. and in Canada) and was distraught when her friend Dez disappeared briefly in the first book. She has an unfortunate feel for the tragedies that happen to people who look like her and how vulnerable they can be. Excitedly, we’re introduced to new faces to add to Dez and Miikwan’s crew: Kacey, a fellow teen who lives in an alternative care living situation along with Dez. And there’s also Riel, who is a newer student who came to the neighborhood after losing a family member to police brutality.

Tasha Spillett-Sumner pens a narrative that includes a powerful thread to follow: the old generation and the new generation working together–the old guard and the new guard attempting to get on the same page to make sure no one is left behind–no one is left in the cracks. What does queerness look like–for an Indigenous person? What does navigating one’s sexuality look like in a world that already has it in for you? What does it mean to find yourself arriving at a Two-Spirit identity?

Elder Geraldine, affectionately known as the school kokum to the Native students, is at a loss for words. As an older person, she’s not sure what to do about the gendered protocols that have been traditionally passed down and taught to her, but she wants everyone to feel welcome–and validated. Are people we love more important than protocols? Than traditions? If not, why? Sometimes, it helps to have another perspective, to have the words and hearts of the younger generations expressed and heard to make sure we’re all on the same page. As a reader, this really resonated with me and I found thee handling of this part of the narrative on point and well developed.

I also appreciate the attention to detail here and the cultural authenticity in regards to the handling of this and the Cree and Anishinaabemowin translations of certain words and phrases sprinkled throughout the book. I love hearing and reading the words of my elders and those who came before me, so seeing that an elder wrote the bit of afterword about the history of the Two-Spirit term, the umbrella term “that provides a window into the many Indigenous Nations and societies that honored and respected their community members” who may fit into the diverse LGBTQI community is insightful. And necessary. And appreciated. I’m familiar with the African proverb of “it takes a village,” and I’m sure Indigenous folks around the world have similar proverbs and sentiments as this book reflects that work and it shows.

I loved seeing Natasha Donovan’s artwork on page once more. Her colored illustrations bring back the warmth from the first volume that I familiarized myself with a year ago when I read the first volume in the series. My favorite sequences in the book were probably Dez’s dreams that blended so seamlessly into the modern, or current day, especially the beginning of the book. The dreams hold a greater significance, as made apparent later down the line and it was a beautiful realization to hold in my heart when I read along. Once fully realized let me tell you. that my heart was so happy for fictional Dez and any person, young and old who happens to find themselves in the shoes of this character! The pages towards the end of the Mino Bimaadiziwin, the after school program for Native students, produced some thought provoking and really endearing scenes that spoke of promise and standing behind someone, in your community that you don’t want to get lost, to fall into the cracks.

A returning visual that can’t be forgotten that thankfully appears by way of artistic decision is the portrayal of the spirits of the ancestors and family members still here in some form watching over and protecting the young Indigenous folks present. They appear on page in faint forms colored with the palest of blues. As I noted from my review of the first volume, I also interpreted the other forms present, the grey, creepy, eyeless creatures are spirits of past efforts of colonization and fear that refuse to be banished from this plane. They show up in most places the first spirits are, and usually accompany authority figures or individuals who don’t or may not have the best interest of protecting those in their care. Seeing them on page along with the other spirits adds layers to the visual look of the graphic novel and the overall narrative of survival for Native folks.

The Future is Bright

While the graphic novel is not very long, clocking out under sixty-five pages, it is a worthy sequel and one that brings closure to another story about marginalized young adults that I loved reading about. My one true criticism of this work is that I would have loved to learn more about Kacey, one of the newer characters in this book who becomes apart of the inner circle of Indigenous kids. We get a good picture of Riel and his backstory–he had a memorable introduction in the classroom. But Kacey, the young lady who was a fellow teen in the group home along with Dez, and someone hinted earlier on that she may be more to Dez as well?  I wanted to know more about her–the one lingering question that i had that left me unsatisfied, especially since the foundation of the series centered on Indigenous young women.

There’s always room on my bookshelf and in my heart for more Indigenous stories written and illustrated by Indigenous creatives. Their stories matter, today and always. Stories about and from Indigenous folks outside the United States are ever more important as someone who seeks to be a literary citizen, and the Surviving the City series is a evergreen reminder that I need to keep seeking out these stories and the people who are creating and presenting them.

As the first volume in this series was a love letter to Indigenous girls and women, the sequel still builds on that love. Surviving the City Volume Two: Up From the Roots, focuses on a close knit group of young, Indigenous people reclaiming their futures by finding ways to overcome the obstacles in their way. This graphic novel focuses on a community relearning the teachings and overcoming prejudice and uncomfortable feelings to celebrate their own.

This book focuses on exploring that marginalized persons can also figure out how to thrive and not just survive. Here the youth are connecting with everything that they have and possess and yet learning new things from the past, from their heritage. Created for the eight to twelve years old aged audience, Up From the Roots is an excellent addition to the graphic novel cannon that centering Indigenous youth and their lives that older readers can read and also learn from.

9 Delicious Creations Made With Bannock Out of 10

Tasha Spillett-Sumner (she/her/hers) draws her strength from both her Nehiyaw and Trinidadian bloodlines. She is a celebrated educator, poet, and award-winning author (Indigenous Voices Award, alternate format). Spillett-Sumner is most heart-tied to contributing to community-led work that centers on land and water defense, and the protection of Indigenous women and girls. Tasha is currently working on her PhD in Education through the University of Saskatchewan, where she holds a Vanier Canada Award.

Natasha Donovan (she/her/hers) is a freelance artist and illustrator from Vancouver, British Columbia. Her sequential work has been published in The Other Side and This Place: 150 Years Retold anthologies. She is the illustrator of the award-winning children’s book, The Sockeye Mother (shortlisted for the Norma Fleck Award for Canadian Children’s Non-Fiction), the first book in the Mothers of Xsan series. Natasha is a member of the Métis Nation of British Columbia.

See more of writer Tasha Spillett-Sumner here and illustrator Natasha Donovan here. Follow along with publisher here and buy a copy of Surviving The City here.

Read more of our graphic novel reviews and coverage here!

Are you looking for more graphic novels from indie and smaller press publications this holiday shopping season? Check out this list here, From the Roots Up made that list!