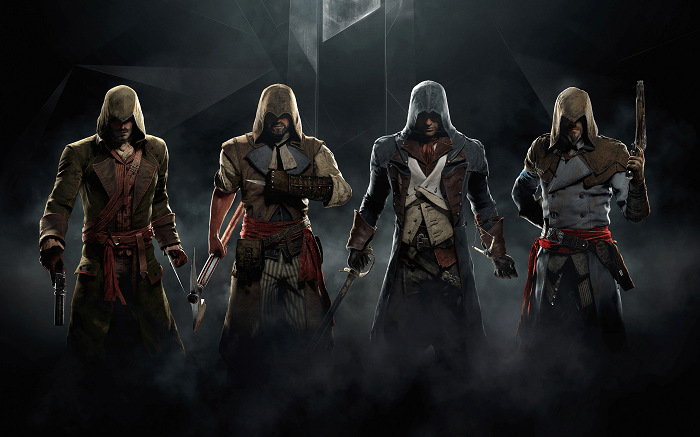 A few years back, a friend of mine joked that we should start a consulting firm for video games. Our sole objective would be for them to bring us in to see their finished product and let them know how terribly stereotypical their characters were before the game shipped. Two titles in particular spawned this idea. When the much anticipated Mafia II, produced by 2K Czech debuted in 2010, the game was received well enough with some outstanding technical achievements (especially if you played it on the PC). However, any people of color that you encountered (which was few and far between until your character went to prison…*cough*…) were among the worst stereotyped characters I’ve seen in the modern era of gaming. While my eyes are always keen to see how black characters are portrayed, the characterization of Asian characters in the game were just unnaturally brutal. You would’ve thought the game’s dialogue was written in the 30s. In 2011, another big hype sequel Deus Ex Human Evolution dropped players into a large branching narrative based in future Detroit. Unfortunately, no choices you made would let you bypass talking to Letitia, the homeless black woman who is now your informant and “honey child” wise sage. While the offense was not as aggressive as Mafia II’s renderings, it was still a bad look, especially for a game that excelled in almost every other aspect. I bring these up to say two things: One, just like all other forms of media and entertainment, you can find a ton of examples of marginalizing characters that weren’t necessarily white or male. But also, two, Ubisoft as a developer isn’t alone in these challenges. They’ve just recently become the face of it.

It would be much easier (and probably more of a crowd pleaser) to do an entire column on how badly Ubisoft has been with diversity over its history, but that actually isn’t true. One of the largest cult favorites (and head scratchers for why we never got a sequel) in gaming is Beyond Good and Evil, as you play as the instantly lovable Jade. I’m not sure if it was ever confirmed or not, but I would consider Jade a woman of color as well. Ubisoft has a splattering of those in the pre-next gen era. If we start looking at the next generation era after 2005 (when the Xbox 360 launched, followed by the PS3 in 2006), things begin to become a little more complicated for Ubisoft. Some of Ubisoft’s games don’t run into these issues at all. The Splinter Cell franchise has and always will be about its protagonist Sam Fisher (a better trained and less impulsive Jack Bauer type for those unaware). Splinter Cell even had the icon Lambert played by Dennis Haysbert, who was Sam’s friend and handler for multiple games during the franchise. Even this year’s Watch Dogs (for the all the things it does wrong) portrays its non-white male characters in a pretty authentic way…even if most of them are pretty boring. No, when it comes to Ubisoft and diversity, the conversation probably starts at Far Cry, an unsuspecting then, but huge franchise now for the mega developer. The disposition of Far Cry sets it up for it be a challenge from a representation and diversity standpoint before you even pick up a controller. The first game drops you into the shoes of Jack Carver, ex special forces who finds himself stranded on Micronesia, a series of small islands in the Pacific Ocean. As the game was released in 2004, there was no shortage of movies or shows that contained the Hollywood trope of the white ex-soldier with a dark past suppressing a genocide of indigenous people. Yeah, yeah, we get it. Things began to become a little more overt when Far Cry 2 rolled around in 2008. This time, you were a mercenary in Central America, aiming to take out the Jackal who has plagued the villages. Or more accurately, the The White Devil. You have your “choice” of protagonists this time around with at least one being a person of color, but basically, they’re just skins for your hands when you’re holding guns and don’t factor into the story or gameplay at all. The twist of that game is that the Jackal isn’t actually the devil, but a well-meaning humanitarian that is trying to save the indigenous people from the rival factions. Hella subtle, Ubisoft.


[divider type=”space_thin”]
Far Cry 3 was probably the most controversial of the series as you jump first person into the body of Jason Brody: a white 20 something yuppie who is vacationing with his brothers and friends in Bangkok before they find themselves being held captive on a pirate infested island. In the process of freeing yourself and your companions, you as very white and naïve Jason begin to be inundated with the Rakyat (Malaysian) culture, including receiving tribal tattoos and becoming their champion that will save them from the unsavory exploiters of the island. Yeah, I mean, third times a “call a spade a spade,” charm, right? In Far Cry’s defense, (outside of me just loving to play the game) the important characters of color are fully developed and entertaining. The story of Jason’s “maturation” from naive kid to soldier and defender of a cause bigger than him makes the most sense with the presets it gives you. Still, its hard to ignore the White Knight crusade in a foreign land dynamic that the franchise has based its storytelling around. As you can imagine, people were pretty ready to pounce when the cover art for Far Cry 4 dropped and portrayed a lighter skinned man in a makeshift throne with his hand on a kneeling Asian man’s head.

When gameplay finally surfaced and showed the lighter skinned man in question wasn’t white, but actually Asian himself, it helped to stem the criticism some, but the damage had already been done as far as a negative cloud over the game. It also showed that the general public had reached a breaking point of being silent on Far Cry’s imagery and symbolism over the years and wasn’t willing to wait before pouncing on them. I’m not saying that any one should shed tears for the intentions of Ubisoft being mistaken, but that they may have set themselves up to over explain scenarios that might be deemed questionable or insensitive to minorities. Just a few days ago, a spokesman for the game had to come out say that the game was “packed to the gills with women,” even if the playable protagonist is a man. Yeah, its clumsy, but at least they’re trying…you know, something. They could be pretty hair trigger because of their own negative press or it could be because of that Assassin’s Creed thing…

Assassin’s Creed, somehow, has become Ubisoft’s number one franchise by a really wide margin. I say somehow, not because that’s implausible for some reason, but because the first game was really, really uninspired. The voice acting was atrocious, it was way too talky and pretentious and completely uneven in its gameplay. However, by most accounts, Assassin’s Creed II was a masterpiece, at least in the ways that it improved upon its predecessor so quickly, ie, not coming six years later as a reboot. Even those early AC years had a some rumblings to them, but they were more aimed at religious representations, as making a game during times of religious persecutions and upheavals such as the birth of the Renaissance or reign of Constantinople will bring that. Things got interesting from a diversity standpoint in 2010 with Assassin’s Creed Brotherhood, where a large component of the game included the recruiting of other assassins. Including women assassins. There was no real distinguishing between the male and female sidekicks and neither of them were particularly well developed anyway, but at least they were there. At least someone thought to think that women could be part of that particular world that not only included being a courtesan or the witty, tech savvy woman who never leaves the office (and yes, Felicity on Arrow fulfills this legacy). But even AC’s multiplayer had playable women characters in it. Without being prompted (at least externally), Ubisoft seemed to be diversifying itself. This culminated in 2012 with the release of Assassin’s Creed Liberation, a launch title for the PS Vita. At long last, you played as Aveline de Grandpre, a young African and French woman in 18th century Louisiana. Wait, what? You got to play as a young Black Woman in the southern United States during the 1700s? Yeah, you did. And it was pretty damn cool. This wasn’t some half baked narrative or a generic plug and play tactic, there was significance to your character and the world around you as a woman of color in that setting. Aveline, who I consider to be the most interesting of all the AC protagonists, had very believable and solid motivations and goals and while mechanically, it wasn’t the strongest AC game, it was a plot that Ubisoft could hang its hat on. 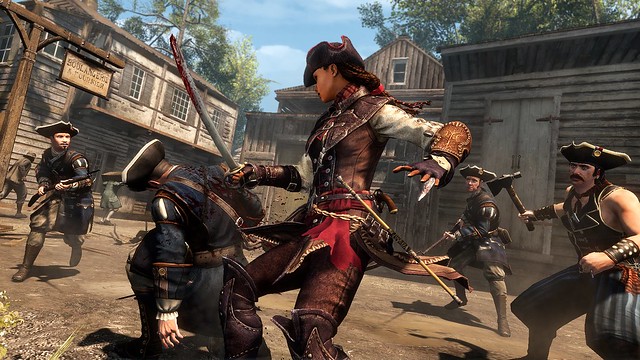 This is why Ubisoft’s stance on their configuration for Assassin’s Creed Unity is so baffling to me. If you haven’t heard the story by now, this year’s AC release will have not one, but four protagonists. All of which will be men. When they were pressed as to why there weren’t any women assassins in the game, the initial response is that it would’ve taken too long in the production cycle and that women were planned to be playable characters in the game, but were ultimately scrapped. This exposes two issues. For one, if true, which I and the rest of the world are pretty skeptical about, shows that the model of dropping another Assassin’s Creed game every year on schedule just validates the criticism that the games are more akin to being pushed through an assembly line for maximum profit as opposed to making outstanding games. Second: What the fuck? Seriously. Diversity just got left on the cutting room floor? That’s really an acceptable answer? Of course an official Ubisoft response after that where it really just spoke about how it has produced characters like Aveline and Adewale (a runaway slave from Assassin’s Creed IV and the Cry Freedom DLC) but spoke nothing for the current lack of diversity for its upcoming game. In other words, stop saying that about us, we have black friends.

It is important to note that Ubisoft is actually a series of Ubisoft studios and that not every game is done by the same production team. Almost all of the huge studios publishers are like this now, which is why every third Call of Duty game is actually good and moving the franchise forward. Still, there is a standard that should be met under the big umbrella that is Ubisoft and when it comes to inclusion, this is just bare minimums at this point. There is a pervasive argument concerning “diversity for diversity’s sake” or how much of the public is actually “affected” by the lack of diversity. This is the argument that always bothered me with the growing discussion around the Washington “Professional Football Team.” If we know something is wrong or excluding another group we shouldn’t be polling to see the exact number of people pissed off about it personally. We should kind of ya know, just do it because its the right thing to do. We tend to talk about how this effects people of color or women that play already play games feeling dismissed, but we don’t talk much about how the monochromatic nature of representation creates an environment where those same people don’t even get invested. And any good model for entertainment or business finds a way to bring new customers into the fold while taking care of its existing. More people are playing games than ever before and seeing how many units Ubisoft moves, they above all, should know that better than everyone else.