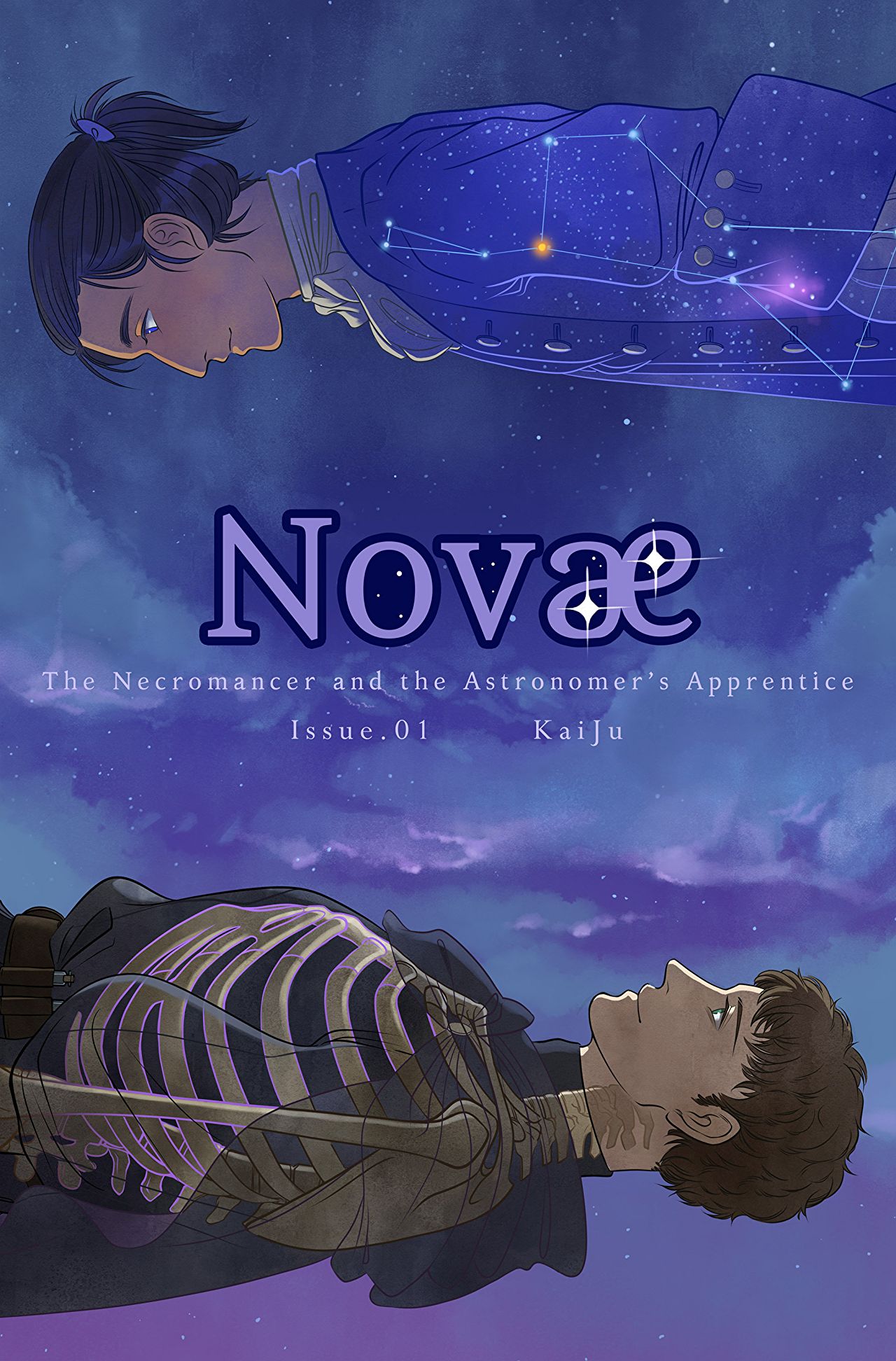 I squinted (Bless me Ultima and my poor eyesight) when looking at the cover of this comic on Comixology in the indie section because the art looked familiar to me for some reason. Upon further examination I realized: YES. OF COURSE IT DOES. It’s Kaiju, the wonder duo behind a BNP fave Mahou Josei Chimaka but also known as “two-headed monster with a passion for creating worlds rather than destroying them” in some circles. I had to buy it.

Set at the during the scientific revolution in 17th century France, Novae is the story of the crossing of the paths of two different individuals: Sulvain a msyterious fellow with a calm disposition who is traveling and not one much for words. He visits the city to see an old friend who happens to an important man who belongs to the Parisian academic and scientific scene that has blossomed there. Sulivan is poised, every move deliberate. He is an enigma. It is there at the Academy that he meets Raziol Quamar.

Raziol happens to be the apprentice of Sulvain’s dear friend and he is the splitting picture of the scholarly apprentice type. The stars, how to chart them, their names, what astronomy can teach us…this is Raziol’s passion. He is a dreamer, often much in his head and socially awkward at that. He flusters easy. He makes mistakes often. The library just might be his sanctuary. His Brown skin and non-European name makes me both happy to see a person of color in a historical setting and very curious to how the public and Academy treat him based on that. 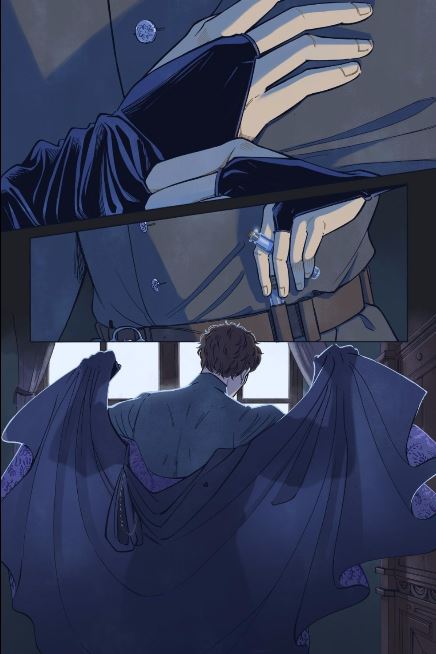 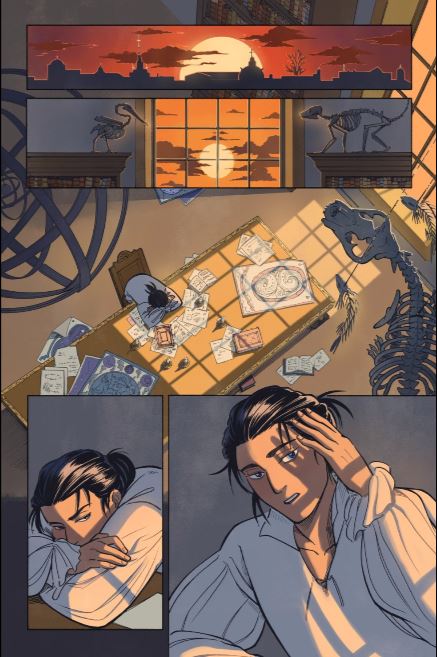 I can’t move forward in this review before I tackle the artwork present here. No shade to the writing–the artwork here is just gorgeous. Just beautiful. The art and the story are a winning combo, certainly. The attention to detail here is spectacular. Look to the two pages above: This is the first page of the book and the first glimpse we see of Sulvain. Peep the light coming from the window–see the shadows? Look how the clothes crease. See the glint off the tiny glass bottle in the second panel? How about the pattern of the fabric of his cloak as he pulls it on? Our first look at Sulvain is an incomplete one at best: we can’t gather much about him at this point. We’re not even granted a look at his face yet at this point in the comic. Just who is he?

In the second page we see Raziol awakening from slumber as he’s probably fallen asleep working on something on great importance. He’s in the library of Academy of Sciences and this page is just breath-taking: the sun is setting and the dying light is there, present in every panel. The room is intricate revealing the shadows of the window panels as the sun takes its leave, the shine to Raziol’s hair and even a unique perspective that showcases some unusual collected pieces on display in the room. Our first look at our apprentice is that he often feels smaller that he is, in the bigger scheme of everything else–he’s often insecure at his abilities and his place inthe world.

On the surface not much happens this issue. Take note, that’s not a problem. While not a whole lot of action takes place, there’s plenty of exposition and a bit of character study here. I enjoyed this first piece of the pie. This first taste of Sulvain and Raziol and the world they inhabit and make their way in. And their growing interest in each other. 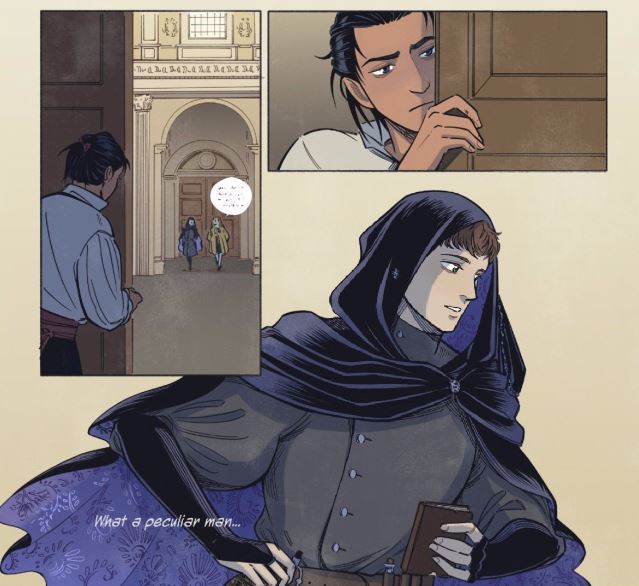 It’s fascinating. The pacing is not problem here, in this issue–the gentle give and take from page to page is endearing, easy to soak up and makes you hungry for more. As I was reading, I felt myself falling further into the story but also curious about each character’s motivations.

Issue #1 of Novae never felt rushed. It never felt boring. It hooked me line and sinker. Here’s your historical LGBTQ drama/romance with just hints of mystery and just hints of the supernatural this early in with art so beautiful you’re going to totally want to reread to soak it all in again.

Kaiju runs Novae as a webcomics here with regular updates on Mondays and Thursdays. The creators have noted having the first issue up on Comixology means “it’s easier for readers using phones and even has a cool guided view function…that’s something that makes your reading experience easier.”

I’m so happy to have stumbled upon the first issue there and I just know that it will bring new readers as it has brought me. Peep the prequel here!