Imagine walking the show floor at New York Comic-Con. It’s the first day, so you don’t really have your bearings yet. Hell let’s be honest, you don’t even know which way is up or down. It’s a lot to take in. Now, imagine being in that state and running into the Maestro with the Infinity Gauntlet & graffiti tagged on his torso asking “Who Killed King Hulk?” 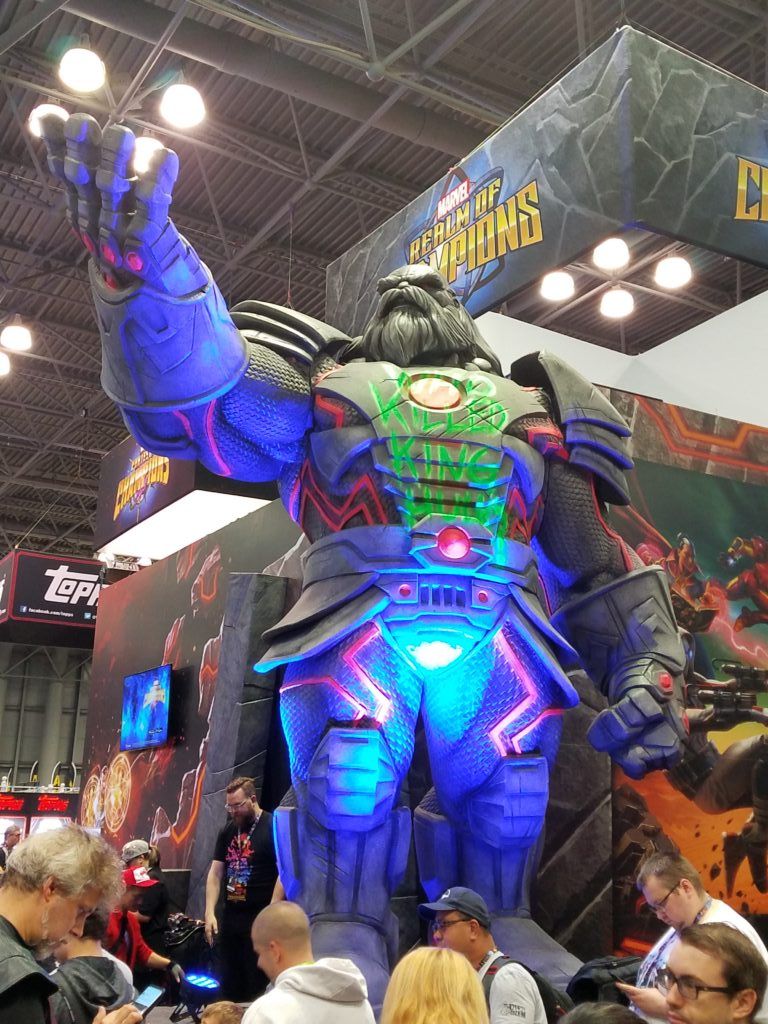 What the hell is going on? You don’t know but you have to find out. If you missed out on NYCC this year or just couldn’t wait in the long line that formed behind the Maestro and led to a thinly veiled room, I’ve got you covered.

Enter The Realm Of Champions

Behind the curtain was the first look at Kabam’s newest mobile game Realm of Champions, a sequel/companion to Contest of Champions. Fans were treated to a trailer of the game which debuted at the show on Thursday and the firsthand experience as to how this game enhances the experiences and gameplay of the first one.

But let’s flesh it out a bit more like Wolverine’s skin after it regenerates from a bad burn.

Once you wait in that line and the veil is lifted for you, you walk into a chamber of sorts with the focal point being a throne with skulls and mementos of familiar heroes like Black Panther’s helmet, Captain America’s shield, and Thor’s Hammer. Behind the throne is a large map of a world that features chunks of other worlds and realms from across the galaxy pieced together into a large landmass that could never come to be organically. There’s a green blood splatter on the map that descends to an outlined body on the ground in front of it, presumably King Hulk. Surrounded by the throne are eight flags with emblems and names underneath: Asgardian Republic, Gamma Horde, Kingdom of Wakanda, Pyramid X, Patriot Garrison, Spider-Guild, House of Iron, & Temple of Vishanti. 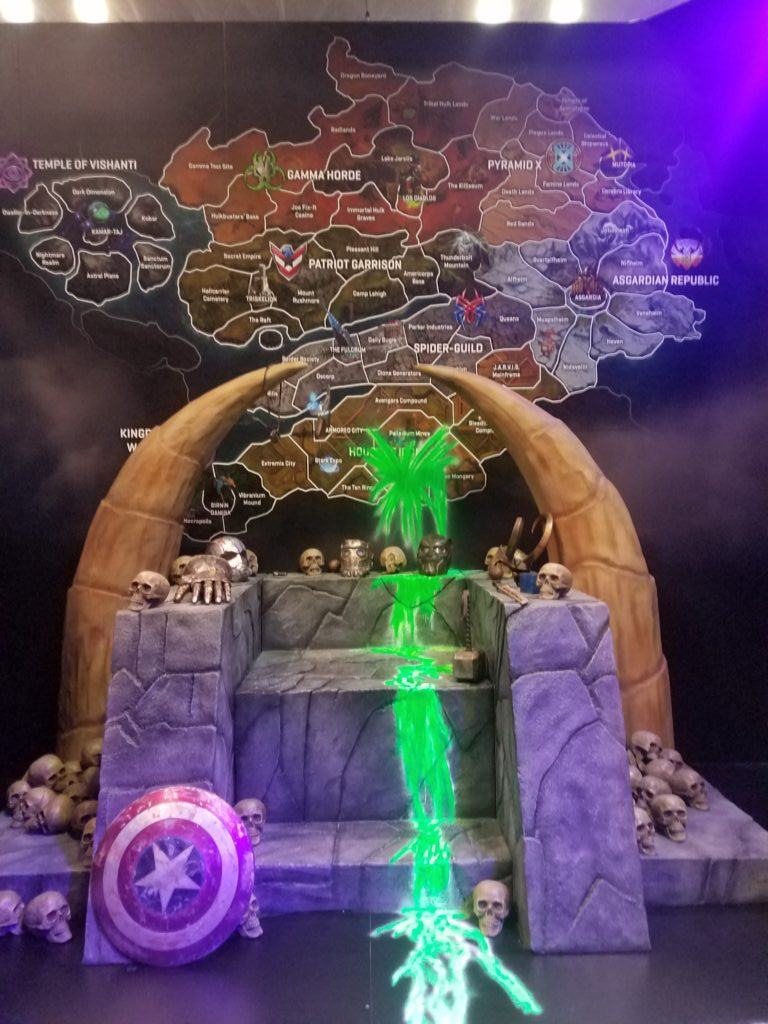 What in the Nine Realms is going on?!

After you take everything in for a minute, you’re guided over to a tablet that has the game featured on it. While there, you partake in what I can only assume is the opening sequence of the game, when you get acclimated to this universe and choose what house you’d like to fall under. Remember those flags? Those are the eight classes you get the luxury of joining in the game. You choose one, and then you build on that foundation as you go on.

I wasn’t treated to any gameplay, but I was able to see the leader of everyone’s house pitch to me why I should join them in this fight. Among them were Queen Shuri, Dr. Strange as the Ancient One with the Eye of Agamotto as his literal eye, and an Iron Man piloted by a holographic Tony Stark. This is the type of multiverse madness that I live for.

After that, I had a conversation with Gabriel Frizzera and Meghann McGregor, the Creative Director and Producer of the game, respectively.

Realm of Champions Questions and Answers

Gabriel Frizzera: Contest of Champions is five years old. It keeps growing. It’s our big game. But we had this idea a few years ago where we wanted to explore, and we kept putting stuff into the story in the background. We wanted to make a big story. But then it kind of got too big and too weird, and it actually started to become a new game. So, we went to Marvel and said hey we think it’s time to do another game in the same universe. Let’s connect the two games. And Marvel was like yeah that’s pretty weird but we’ve been doing Contest for a long time and we have this good rapport and they trust us so they said cool, you’re asking for a lot of craziness and customization. It’s stuff they haven’t really done before in games. But because we have a good relationship, they said okay let’s do it.

Black Nerd Problems: The poster outside has characters that look familiar, but different than how we normally may know them to be. So tell me a bit about the multiverse aspect of the game, and how that plays into how the story and gameplay progress from Contest of Champions.

GF: I love alternate realities. I love Secret Wars, Age of Apocalypse. I’ve always been fascinated with what makes a character still feel like the character. So we decided to take that and put it in the hands of the players. We’re gonna have eight houses — you familiar with Secret Wars? The new one?

GF: So we took that seed of the Battleworld idea. And the different territories will be different houses. And then you’ll pick a house, and we’ll give you a blank Spider-Man or a blank Hulk or whatever. We deconstructed those characters to the basic elements. Because you’re not playing with Peter Parker or Bruce Banner. You’re playing with you as Spider-Man. That was the thing. We took everything apart and let the players mix and match. They alter the gameplay, the appearance of course. And then we have to be very careful because if we just give them a bunch of pieces, they’ll assemble something that won’t look like Spider-Man. I play other games like fantasy games where everyone wears armor. But in this, everything is different. So if I mix half of my Spider-Man with Spider-Man Noir and the other half as Spider-Gwen, will that still look like Spider-Man? So I have to make sure that the aesthetics are really on point, so when you put them all together it still feels like Spider-Man, but unique.

BNP: How different will the gaming mechanics be in Realm of Champions compared to Contest of Champions?

Meghann McGregor: Very different. Contest is 1v1 where it’s one player vs. AI, because it’s more of a solitary experience. This game is much more of a social experience. Realm is 3v3 and we’ll have PvE as well. So it’s all about team-based combat and playing with your friends, strategy, competition. It’s really different gameplay mechanics.

BNP: Is there a release date?

BNP: Is it still completely a mobile game?

MM: Yeah, we’re mobile first. We consider it like a console in your pocket.

Well, I don’t know about y’all, but I’m all in. They had me at Queen Shuri, to be honest. Keep an ear to the ground on the Marvel Champions Twitter as more details drop about the game in the next few months so you can be one of the first few to customize your own versions of your favorite character types in the multiverse.