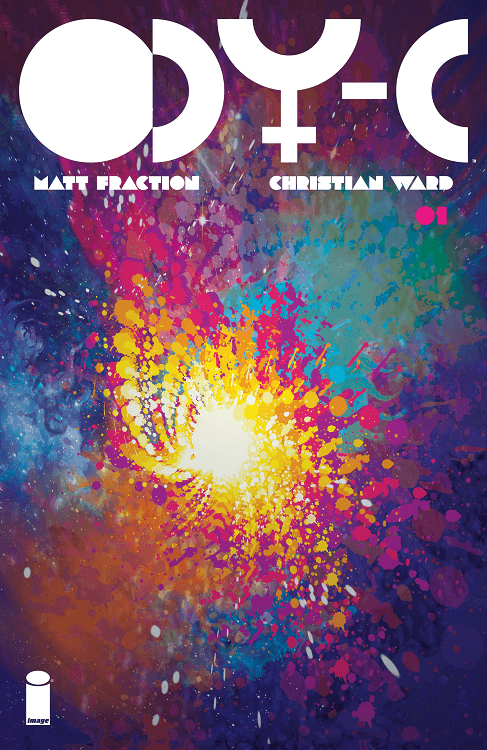 Matt Fraction BAAAACK! Ok, Matt Fraction didn’t go anywhere, he’s got arguably two of the best comic books active right now in Hawkeye and Sex Criminals and a ridiculously slept on but still excellent book in Satellite Sam, so I guess I should say: Matt Fraction BAAAACK WITH NEW SHIIIIT! The much hyped and anticipated debut of ODY-C, a retelling of Homer’s Odyssey is the newest book written by Fraction and he is joined by Christian Ward on the art. The early press for this book was that this is the Odyssey with the gender roles changed and happening in space. But that’s like saying the movie 2001: Space Odyssey is about monkeys standing around a black monolith. It barely scratches the surface.

Enter your new favorite woman badass protagonist in an Image Comic book (which is becoming a really crowded field in the best possible way), Oddysia, fresh off of the sacking of Troiia. (Come on lit nerds, this is super cool already and we just got started.) After winning the decade long war, Oddysia and her generals plan to return to their respective homes, but as you already know, that might get complicated.

I don’t really know what to talk about first and why this premier issue is incredibly different and weird and awesome and inspiring. We can start with Christian Ward’s art and the chaotic order it commands. Almost nothing is clean or defined. Everything looks like liquid poured into a narrative per page. It feels large and endless and dare I say, epic, like a true myth or fable.

And look, we’re not gonna pretend here at Black Nerd Problems that we haven’t elevated Fraction to some deity plane, but the uniqueness of the language really surprised me. He could’ve wrote this like a typical comic book, except with his level of dexterity in the language. But this isn’t a typical script. It’s prose. It’s the construction of language treated like an art in and of itself. It is definitely an ode to language of the original Odyssey and it’s brave, unique and extremely poignant.

If there’s any part of this debut issue that didn’t 100% click for me, it was the involvement of the Gods on Olympia. This world that Fraction and Ward have created is so weird and inventive and other, that supernatural intervention would fit right in without the presence of omnipotent meddlers resting above everyone, even if it is canon for the literature. Still, it’s nitpicking the Mona Lisa as opposed to it actually being a real issue with the comic. It’s gorgeous. Period.

If you still have people that you come across that do the “you read comic books, how old are you” BS, there are always more mature books that challenged conventional (and snobbish) views of higher literature. This is another entry into that group. This is art. Straight up, art.