This is one of the BEST Gamecube games ever! Almost anyone will LOVE this game. If you were a fan of Star Fox, then you definitely enjoyed this game. When you’re not flying in your Arwing, you are exploring Dinosaur Planet. You obtain a staff that shoots fire and ice, creates earthquakes, shoots you in the air to get to higher places, and fight enemies. You have a great team who helps you along your mission. Peppy gives you world maps, Slippy gives tips on what to do next, and General Pepper shows you your mission status. The main storyline is that Dinosaur Planet is falling apart and might blow up, so General Pepper hires the Star Fox team to save the planet.

Prior to that, a fox named Krystal searches throughout space for her parents and hears a distress call from Dinosaur Planet. She discovers that General Scales has chased the Krazoa away from their shrine. The Krazoa are spirits that bring peace when they are used wisely, but can bring great destruction when in the wrong hands. Krystal goes and looks for the Krazoa. Unfortunately, she is pushed into a magic beam and gets trapped inside a giant CRYSTAL! 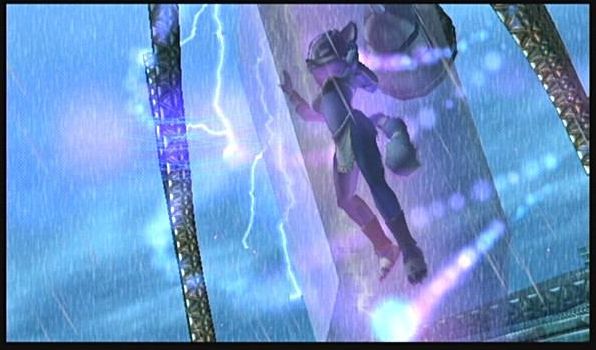 A coincidence? I think not! When Fox arrives to Dinosaur Planet, he does not have any weapons with him causing him to look for one. He finds Krystal’s staff and learns of her capture. Now you must save Dinosaur Planet and Krystal. It’s going to be a looooong day!!!

So you go through a series of events. Fox meets the Queen of Dinosaur Planet, who is looking for her son, Prince Tricky. Cute name! After you find him, he becomes your buddy. He’s useful for his skills such as breathing fire and finding secrets hidden in the ground. When you take him to his mother, she tells you that the planet is falling apart. To prevent this, 4 spellstones were created to keep the planet together. However, General Scales scattered them around causing the planet to break apart. This causes you to fly your Arwing to the different pieces of land where you must retrieve the 4 spellstones.

The game mechanics are pretty basic and easy to get a hang of. You attack with the “A” button, you can get magic powers, collect money, and buy items. Most of the game is spent solving puzzles to get from stage to stage. Your staff is used for most of these puzzles. One of the most annoying puzzles is when you are running upwards on a conveyor belt-type-thing, while holding a bomb and barrels are rolling down towards you and you must avoid them. If a barrel hits you, you’ll drop the bomb and must go to the beginning to get a new one. This looks kind of familiar.

The graphics in this game are pretty good. The staff’s effects were done very nicely. What I love is when an enemy dies. They don’t just lay on the ground and magically disappear. They fall backwards and slowly fade out into a bright, white light. That effect is awesome! The voice acting is pretty good too! The overall experience of the game makes it a success. From the awesome graphics, the brilliant voice acting, to the beautiful atmosphere of Dinosaur Planet. I rate this game 10/10. This game has no errors or bugs and I definitely recommend it to anyone who hasn’t played it!