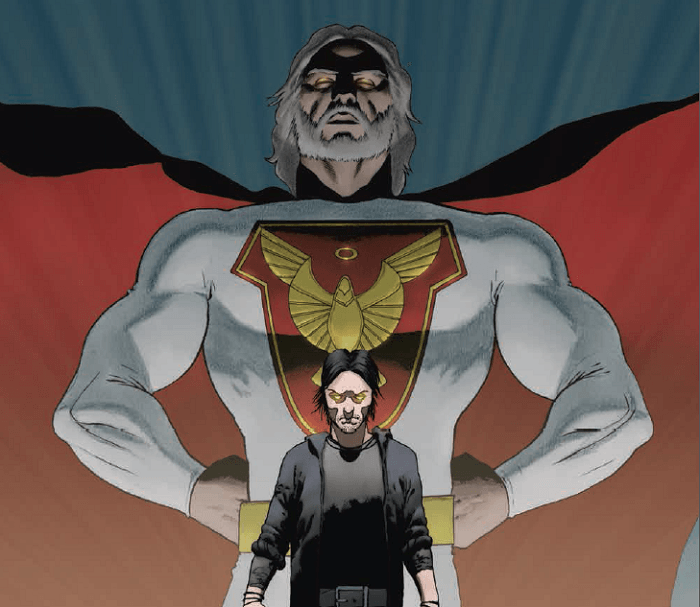 19 Shares
Some plot spoilers for the Jupiter Series
Holiday weekends, in theory, or in the imagined psychic lie I construct for myself are supposed to be super productive days. I spend the waking hours of the work week doing a job that does not feed my creative necessities, so being off for three days or more should be my “get shit done” days. But instead, at the praising and properly hyped recommendation from Black Nerd Problems contributor Ja-Quan, I found myself instead venturing into my comics to do list. I had only meant to read the first couple of issues of Jupiter’s Legacy. I had only meant to read the first volume of Jupiter’s Legacy. I had only meant to see how Jupiter’s Circle started. Within a few hours, I had read the entire series, including the Legacy volume 2 conclusion, the single issue that released this week. Yes, Mark Millar is a brilliant and innovative writer. This is a known and verifiable thing. I wasn’t surprised at the efficient and beautiful locomotion of the story. I was most drawn in by the proposal and questioning of legacy itself, as it’s something I feel the grip of each and every day.

[quote_simple]They fuck you up, your mum and dad.
They may not mean to, but they do.
They fill you with the faults they had
And add some extra, just for you.*[/quote_simple]

Jupiter’s Legacy essentially begins with a Macbethian story: the plot to murder a king. After being granted powers on a remote island during the 1930s, the Utopian, the world’s greatest hero leads America back to prominence. For a time. Along with his fellow heroes (once dubbed the Union), time has moved even if the Utopian and his puritan ideals have not. He’s a father of two children, both inheriting superior powers, both initially unable to live up to their father’s incorruptibility. Eventually, the Utopian has alienated enough people over a long enough time line they have imagined a world that continues to spin without him in it, with his own son Brandon providing the final wound on the senate floor. 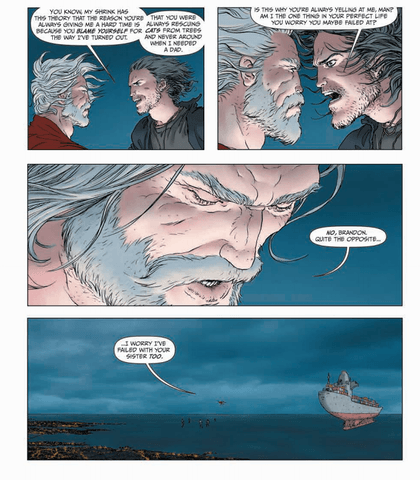 Reading through this series, I realized that I am no one and everyone in these panels. While this story is of course wrapped in flight, heat vision, telekinesis and stakes of the entire world hung above the head of its characters, it is at its core about parenting and parentage. To know me for a day is to know that I think that my father is a brilliant man. And while either encouraging or a detriment to that statement, I am also aware that I am very much my father’s son.

[quote_right]While this story is of course wrapped in flight, heat vision, telekinesis and stakes of the entire world hung above the head of its characters, it is at its core about parenting and parentage. [/quote_right]I graduated with my undergrad from The Ohio State University at the age of 34. My father graduated with his Master’s Degree in chemistry before he turned 24. By the time he was 30, my mother and him were sacrificing a lot on the way to lifting us (and my yet to be born sister) from the previous lower economic state that both of their families existed in. He ascended highly within his job, a fortune 100 company and worked tirelessly there and at home, all of which was a precursor to my sister and I having little excuse to not succeed in some fashion once we left the nest. My father, who is a good man was, and is, far from the pillar of humanity that is depicted by The Utopian in the Jupiter series. I am not the colossal fuck up filled with jealousy and murderous intent that was the Utopian’s son Brandon. We do, exist somewhere in the space between the Gods and the Earth they dare not land upon. My father seized on his potential early, while I floated in the undisciplined current downstream from the waterfall he conducted. And yes, I’m aware that is not a condemnation of me, that I was not a failure because I didn’t become my father, at least not at the speed he did. But once, I was a boy with a father. And once, I was a boy with my father’s gifts cloaked in the tower of what he had achieved thus far. No amount of self esteem makes those constructs disappear overnight.

[quote_simple]But they were fucked up in their turn
By fools in old-style hats and coats,
Who half the time were soppy-stern
And half at one another’s throats.*[/quote_simple]

Legacy is often an abstraction, a word that feels big the way that Titans are. Or the way a parent did from the first memory you can pull in which you needed to be lifted to reach something above your reach. We often think about legacy attached to celebrities or entrepreneurs managing the brands etched into our favorite consumer products. But it is applicable, even to us, if we ever imagine someone or something following us. In Jupiter’s Legacy, Millar is an architect of the story doing double the work. The Legacy on the surface is an informing of what these heroes will leave in their wake, being the first of their kind to shape the world in this way. But while in this fantastical story, the heroes are trying to shape the world into something befitting their kids, but they also have the responsibility of shaping a nurturing childhood for their kids, befitting the type of individuals that will contribute to that very world they want to protect. No matter how we slice it, they fail, on some level at this. I mean, they are murdered and have their good works turned into a perversion so there isn’t really another read on this. What the Utopian and Lady Liberty were willing to bet on, was that the sterling example, the powers they passed down and the unlimited opportunity they provided to their children would be enough. It would carry them to worthy and ambitious futures. 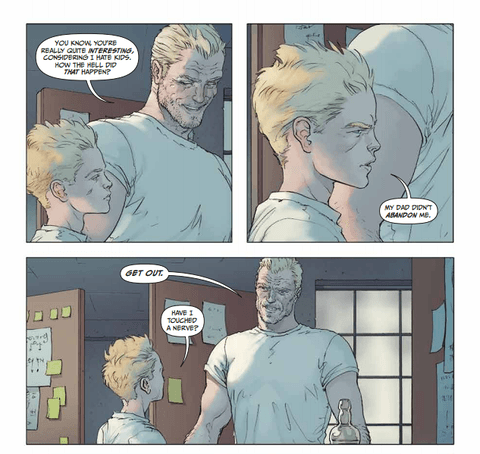 If I struggle with the idea of anything, it is the idea of enough. I watched my parents work their asses off in so many ways to provide for my sister and I and their marriage still ended, which still led to a more fractured parental structure than was ideal or that either had planned on. The beef I often have with my fellow writers and colleagues is the use of a non-existent child as a vehicle that shows how bad the world is or how progressive the writer projects themselves to be. I rarely hear writing from childless authors about how they will simply show up and be present without a specific social act attached to it. Of course, that concept is difficult for parents in earnest, because presence is not an easily measured rubric. I worry about how much I travel. How much time, as a writer, I spend in isolation because my creative process demands it. How when I am enjoying the fruits of my creativity be it performing, speaking engagement, etc, it often, physically occurs in the absence of my child. And yet, I have no doubts about the economic environment that my wife and I have provided for my child to succeed. The work we do in the community, the way we socialize, humanize…all of this feels like we are doing it right. And yet…

[quote_simple]Man hands on misery to man.
It deepens like a coastal shelf.
Get out as early as you can,
And don’t have any kids yourself.*[/quote_simple]

As I enter the last years of my thirties, legacy is something that reaches its greedy hands towards me more often than I would like. The tendrils of something I am or am not, ever vibrant and pulsing. Every accomplishment, every missed opportunity, every close call feels like something being etched into my stone tablet. Some of this, of course is pure ego, but there’s an equal part of this that is a true question of “what exactly have I done or am I doing that will outlive me?” My parents’ legacy, thus far, is elevating their children above structures that limited opportunities for themselves. If I hold the line, send my daughter to a good school, enable an environment that is conducive to her succeeding, the same thing my parents rose into, is that success? Is there credit for not going backwards? I have confidence that I have made some impact in the worlds I move through, but is a legacy still a legacy if it doesn’t tangibly benefit my child?

[quote_left]Some of this, of course is pure ego, but there’s an equal part of this that is a true question of “what exactly have I done or am I doing that will outlive me?”[/quote_left]There’s a further analogy from Jupiter’s Legacy, that relates to my own story. Namely, how my sister probably holds the larger potential between the two of us, but the path paved for me to adulthood was a lot more of a straight line that what she was provided with. I rooted for Chloe, the daughter of the perfect parents the way I root for my own hardworking sister. Optimistic that she is also forging a legacy that she can be proud of. But that’s not my story to tell. The one I can tell, is the story of what attempting to build a legacy may cost you. Or cost my father. I remember when my father began to withdraw, further into himself during my teenage years. I don’t think my adolescent sensibilities had an opinion of it at the time. When I was angry at him, post-divorce I pointed at that as some evidence of something. Of him withholding something owed to me, despite the mounting gifts before me with his handwriting on them. Today, I get it. I totally get it. Not because isolation is a thing that one does, but because it is a thing that I do. Sometimes it is for the sake of creativity. But sometimes it’s because it is my best way to see the world I’m trying to impact. It is a single view stargazing that pulls me away from those I want to affect most. Before reaching the part of the series where the Utopian finally breaks down, finally submits under the weight of trying to be everything to everyone, I wondered to myself, “how does this character deal with all of this?” Isolated, depended upon. The pressure of having such a heavy hand on so many people’s futures? Millar answers that question eventually, but simply, showing that he doesn’t. Drawn in a comic or not, I recognize the look. 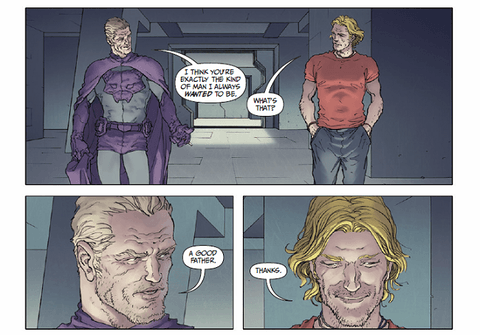 In the end, what Millar so expertly crafts in Jupiter’s Legacy (and Jupiter’s Circle) was how family is defined. What lasts. What’s usable. And probably most important, what on earth is supposed to come next. What makes for an excellent and thoughtful superhero story, is rooted in a much more relatable theme of what we were owed by those that raised us. What our responsibility is in accepting those gifts. And ultimately, what we choose to pass on.
[divider type=”thin”]

***Poem excerpts are from Philip Larkin’s “This Be The Verse”***