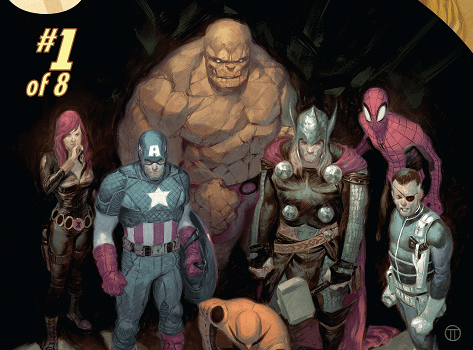 Marvel kicks off its next big event with Original Sin, that is brought about with the death of the mysterious Uatu, ominous silent being that lives on the moon observing everything in history. The story is an interesting one as you can imagine this will further illuminate the Watcher’s background and purpose. This figures to be a long story, given the amount of crossover with Avengers titles and the fact it is an 8 part series for the main story. This first issue is of course spent on setting the table and putting all the chess pieces in their primary spots. What might be cool or clumsy (time will tell) is the groupings that have been established as it seems to be a deliberate collection of odd partners to investigate different sides of this murder.

There’s not much to report here beyond the team-ups and the small revelation of Mindless Ones gaining some shared consciousness as a result of the Watcher’s murder. While a murder that everyone is mystified over should resonate, there just isn’t any emotional weight to it. Original Sin #0 had this in leaps and bounds when it portrayed the back history of Uatu with Nova as the central character as they both meditated on the sins of their father. Hopefully, with this many issues devoted to this story line, we’ll get some more individualization with the teams and make the story worth investing in.