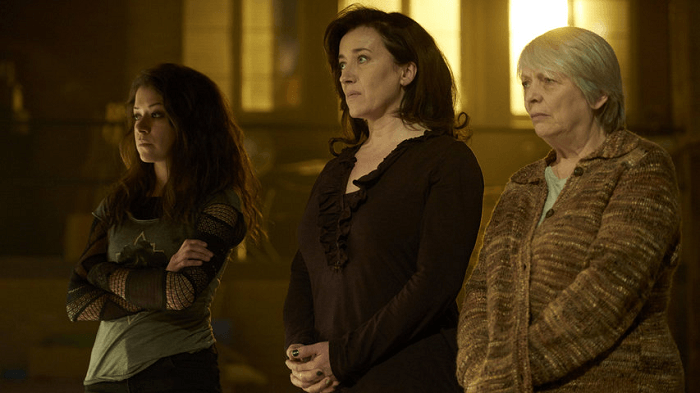 If you are Rachel, then hell might be reliving the time your “father” killed himself in front of you because he thought death was a better option than helping you bastardize the clone program for your own purposes. If you’re everyone else, your hell might be reliving all your experiences with Rachel. She wakes up from that bad dream alone in the damn interior pyramid with a new eye. But I’m sayin, if they got clone techonology, they couldn’t break her off some Skynet type of eye where she’s got Cyborg’s abilities or some shit.

Sarah and Fee roll to their re-purposed black ops site where they can “process” Chimera. Bourne Siobhan comes in escorting her ma dukes with a gotdamn Louisville Slugger like she could go Bear Jew on her at any minute

Basically, Mrs. S is just here for damage control. If anything goes wrong, she plans on giving the her mom the cremation treatment with extra flames.

Rudy is waiting on Den Mother who’s getting briefed in Arlington. This dude trying to get his Furious Styles on, but he got that death clock ticking in his head and can’t keep his concentration. Rudy gets his walking orders from Den Mother and because everybody else in Clone Club has went underground, the target is Alison…

…who is out here hitting the trail hard in the pink.

Marci’s ole hatin’ ass talking about Alison is close to violating some rules, but Alison hits her with the “Ain’t nobody coming to see you Otis!”

Donnie, in showing gratitude for saving his life and banking a lot of illegitimate loot, gives Helena a big surprise by having Boyfriend Jesse come to the crib. CRAZY SEX IN THE TOW TRUCK COMIN’!

In the most unnecessary scene of the whole season, Cosima comes back to Shae’s house to say I’m sorry 12 times while Shae gets her moment to vent. Shae is basically begging for Cosima to tell her the truth and Cosima is like…

Topside finally arrives at DYAD and Ferdinand confronts Delphine. He’s impressed by all the progress that Delphine has made by complete accident because she’s actually terrible at her job. Ferdinand wants the original, but Sarah comes in like, whoa, whoa playa, pump your British, pinstriped brakes. We holdin’ cards in this piece.

She tells him that she’ll give over some DNA from Chimera to Topside, but Castor fucks gotta die. She tells them if that don’t go down, she’ll incinerate Chimera. Ferdinand says that bullshit cuz she needs Chimera for a cure, but Sarah is like, nah b, I DON’T NEED SHIT. I woke up (immune) like this.

After Cosima talks down Chimera and lets her start taking some blood, Sarah and Fee get a tip from Arthur where Judas and her lover Mark are staying. Fee been watching too much Spike TV cuz this dude kicks in the door like it was a no-knock warrant or some shit.

Gracie and Mark playing Benedict Honeymoon and Sarah is like, how you gonna sell out the fam!

But they aren’t planning for the future, Mark and Gracie just trying to live out his days…like they’re 92 years old or some shit. Man, Gracie just need to go ahead and get a jump start on life. Not like this dude is James Dean or some shit. But Sarah tells them that they need his help to get rid of Den Mother and the whole Castor crew.

Chimera complaining about not getting a bath and Siobhan is like, oh, oh, bath what you want? I hear them Sulphoric Acid Soap Beads work the tension right out. Mrs. S in the last 3 episodes has become the baddest muthafucka on this show. For real, if I was kingpin, she’d be my head of security. I was trying to take the Iron Throne, she would be Hand of the King. Siobhan stock is HIGH right now.

Delphine is standing over “Rachel” with Dr. Strangelove and wants to have her moved because Ferdinand assumes that she’s dead. He leaves the room and Delphine starts getting her Sherlock on, noticing that Rachel ain’t the type to get that boutique manicure. But Krystal wakes up on some Kill Bill shit and smacks the shit out of Delphine. Delphine tries to calm her down but Krystal recognizes her from the salon.

Rachel test driving her new eye and realizes that she might be an exhibit in a museum. She keep calling out for someone, but as Felix told her earlier this season, ain’t nobody coming for her.

Helena is telling Jesse ALL the business, including that she makes soap and teaches children karate. Though she left out that she teaches kids to go for the kill. And then, Helena tries to straight up give Jesse THE WORK, capped with this beautiful line:

“I have science baby inside of me, but you will be my first.”

Yeaaaaahhhh…Jesse is a good one cuz he’s still there. But before that can jump off proper, Helena gets a call that the family needs her. And when you have a special set of skills, not too many guesses as to what that could be.

Alison is out here pressin’ the flesh, rallying her supporters at the voting station while Rudy is stalking her and the election bus.

But Sarah and Felix have returned to the Black Ops site with Mark and he’s ready to play his part. Apparently, playing his part is getting beat on by Sarah. I’m guessing she’s been wanting to do this shit for a long ass time.

Alison takes the bus by the house for a pit stop and Rudy follows her inside. But yeah, you walked into the wrong division of Clone Club homie cuz Alison in a different wing. This is Helena Battleworld here and you really don’t want none.

Look, I’m not a troublemaker, but I’ve been in a fight or two. But if I ever stepped up to do some damage and my opponent was taping their hands closed around some screwdrivers, I’m gonna have to take that L by way of “did not participate.” It ain’t really a fair fight cuz Rudy is straight up going Total Recall and can’t hold it together. But even at full strength, I ain’t betting against Helena.

The fix is in because Mark makes a call to Den Mother pretending to be a beat up Rudy saying that he found Chimera, he gives a dummy address and Den Mother re-routes to that location.

Oh, but the real Rudy, he ain’t doing much better. Helena is giving him all the work, petty cash, travel vouchers and keeps reminding him to keep his receipts. Once she sliced that bicep and Rudy drops the knife, we just waiting on the Possible Kill Screen.

Den Mother arrives at “a” location and send in the crew, but Topside is there waiting for her and puts the driver down before letting her know she on the wrong side of the tracks for this one.

Helena shows some restraint and doesn’t finish airholing Rudy cuz that dude is a dead man, but his body just ain’t caught up yet. He shares some last moments while Helena strokes his head and he drinks the last gulp of that sleepy time tea. So, Castor is dead, Siobhan doesn’t have to go Marlo on her ma dukes and all is right with the world, right?

Chimera gives up the story about how she made the connection happen between Sarah and Siobhan, which is heartwarming and also ensures that Mrs. S won’t put her mom in the Baltimore vacants any more.

Delphine got Dr. Nealon in custody for lying about Rachel and incapacitating Krystal. But Nealon hits her with “We Neolution and we run this city.” Turns out that group from Season 1 and 2 that just dabbled in weird genetic shit like giving mutafuckas tails, is actually the one pulling all the strings on both the Leda and Castor projects.

Sure. He gives Delphine the chance to join up, but when she tells him to go kick rocks, she realizes that the guards are gone. Nealon pounces on Delphine and…wait, let me watch this again real quick…ok, he tries to assault her with a worm of some sort that he was keeping stored in his mouth. Wait, let me watch that again…ok, yeah, same shit, a fucking worm…

…well Delphine shoots him, but I kind of wished she shot me so that I could go to Heave and get the tough answers like, what the fuck was that. Delphine calls Sarah to tell her to tell Ferdinand that Rachel is alive and that he’s getting played. Well you know what, Ferdinand doesn’t like being played unless it’s got high heels pushing down on his genitalia. He grabs that bat and goes Hank Aaron on his body man’s dome cuz he suspected he was a Neolutionists. He tells everybody else to bounce while he drops this dude off in the Acid Spa.

Big Clone Dinner going down at Bubbles with everyone there except Jesse (who might still be sitting in his tow truck) and Krystal (who got fucked over worse than anyone). Alison wins the election by a landslide cuz you can’t try to redistrict an area BEFORE you win an election. That’s like Republican 101. At the dinner, everybody is having a good time and Alison gives an acceptance speech that doesn’t mention she’ll probably be kicked out of office for corruption charges in 6 months. Cosima gets a call from Delphine as she’s standing outside the spot. She tells Cosima to keep the genome safe and keep her sestras safe…after she kisses her for like 60 seconds right out on the street.

She gets back to the DYAD garage and she knows the goodnight kiss coming.

Rachel is still in her museum and little (little?) Charlotte comes in to greet her. Followed by Mama Duncan. Lawd, where is THIS shit going???

And because there was a shortage on white folks in the show, they travel up the Alps or some shit where there is nothing but snow. That’s where Kira and Cal have been hiding out since this shit all went down. Kira and Sarah do some adorable snow angels and all is innocent again like Sarah didn’t watch a dude get beat to death and dumped in some acid like yesterday. But all’s well that ends well. 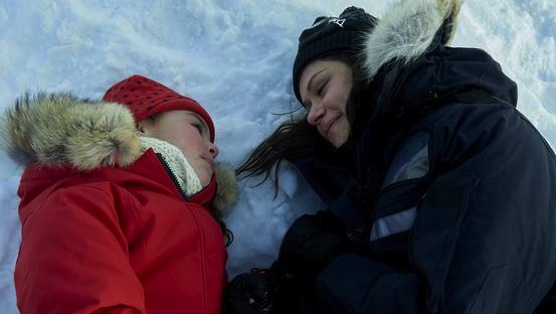