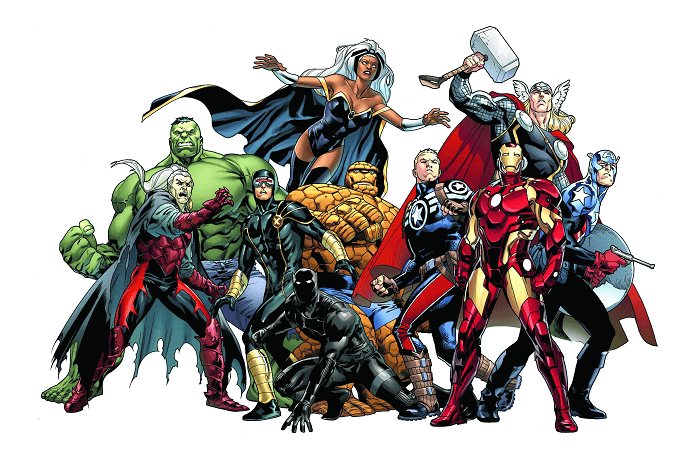 Between DC and Marvel alone, there are supposedly close to twenty comic book movies that are planned out past 2024. Who knows what story lines may either be adapted or just be inspiration for those films, but I wanted to explore some of my favorite story lines that could be adapted for film or TV. This isn’t a ranking by any means or even my favorite story lines of all time, but they are stories I could see being outstanding on a new medium.

Note: I did my best to steer clear of any stories that have either been adapted before (such as animated films as applicable to JLA Tower of Babel inspiring JL Doom) or have been noted as large inspirations for screen (such as Nolan crediting The Long Halloween as inspiration for The Dark Knight) whenever possible. Part I of this limited series is just limited to DC properties. This column focuses exclusively on Marvel.

Why it Makes Sense: Civil War might have been written in 2006, but this could be a story from 2012. Or today. After some C-List heroes are involved in a tragedy due to their inexperience and irresponsibility, the Superhero Registration Act comes about which pits Tony Stark and Steve Rogers on opposite sides as the rest of the heroes from the Marvel Universe take sides. Lots of big battles, lots of great character building moments and tons of inclusion of the larger Marvel Universe.

Delivery System: This could actually be a standalone movie. Would it benefit from having more time to breathe? Absolutely, but it could be done in one flick.

Why it won’t happen: This is a real tricky one. As far as competency and acceptance of the story, this would actually be the next logical place for the story to go with the friction between Tony and Steve already built-in from the Avengers. The movie rights issue does hurt here (kind of a lot) as Spider-Man is such an important part of the narrative (his siding with Tony, revealing his identity to the public as a show of faith, then switching sides and almost getting killed for it). It could be done without Spider-Man (or Punisher and DareDevil who also play big roles), but it would be missing something big.

Why it Makes Sense: If you want the smart money and a character that has paid their dues, then we rock with Da Gawd Carol Danvers, preferably in the Dark Reign story line. You get a good villain in Norman Osborne, Earth’s Mightiest Hero who has a humorous and balanced personality like Peter Parker and probably a cameo from Spider-Man himself. But if you’re asking what I WANT: Then even after 3 issues (4 after this 5/28/14), how could you not make a movie out of this opening story line for Kamala Khan: the young Muslim-American Avengers fan fiction writer who discovers she’s an Inhuman in the wake of the Infinity story line? While they haven’t met in the comics yet, the fact that Kamala idolizes Danvers lends itself to this being a very real thing for them to meet up in a movie.

Delivery System: One movie for both them (at least) with Carol making a cameo in Kamala’s. Won’t take any arguments on this one.

Why it Won’t Happen: Kamala as Ms. Marvel being so new is the only reason I can’t see this happening. And if that’s the cause, then give us our Captain Marvel Carol Danvers movie already (w/ Anna Torv starring. Thanks). Unless you know…Patriarchy

Why it Makes Sense: Yeah, one of the Grand Puba’s is built for the screen. We are familiar with the Phoenix Force already. We know how things go with Tony with his best intentions. And the audience has already been prepped for a Charles Xavier death (in the worst way possible). Wolverine playing such a dynamic role works well for this story too as the present Wolverine could pull this off.

Delivery System: Again, maybe some big stuff gets cut, but I think this works best as a standalone film. And this would be an epic film. Lots of battles, some quiet moments to breathe and a huge finale with big swings in the narrative.

Why it won’t happen: Here lies the biggest casualty of the proprietary wars. The fact that you can’t even say “mutant” in a Marvel film is, how you say, problematic. Fox will continue to make X-Men films into the great beyond just to keep the rights, no matter how bad they may get. Which is unfortunate because this could be the stuff of greatness.

Why it Makes Sense: On a personal level, this is the movie(s) I would want to see above all others. It really carries everything that the Black Panther universe as it were holds dear. The critical injury to T’Challa. The anointment of Shuri as the new Black Panther. Storm going into the afterlife and willing to sacrifice her life to save T’Challa. Do I need to repeat that? Doom playing the long game to steal Wakanda’s vibranium. The villain moment at the vault. The involvement of the X-Men. Deadpool!? Give me this bleepin movie Marvel!

Delivery Method: Movie trilogy is the only way to do this and the way the story sets up, would work really well. You would actually be using Prelude to Doomwar material with the T’Challa critical wounding and the anointment of Queen Shuri, but there are natural arcs and breaks in this story for it to fit naturally across multiple movies.

Why it Won’t Happen: I really wanted to just respond with “racism” but I guess I have to couch that somewhat as we keep getting “unconfirmed but reliable” sources saying that a Black Panther movie is on the docket. I would be completely shocked if we ever got more than one however, and it would be hard to do your first Black Panther flick with T’Challa almost dying in the very beginning, so something would need to come before it. Also, I’m sure there’s some proprietary issues with Storm as a part of the X-Men (as in Twentieth Century Fox’s property) franchise and Black Panther will definitely be Marvel. Sigh, perhaps it is all a bridge too far.