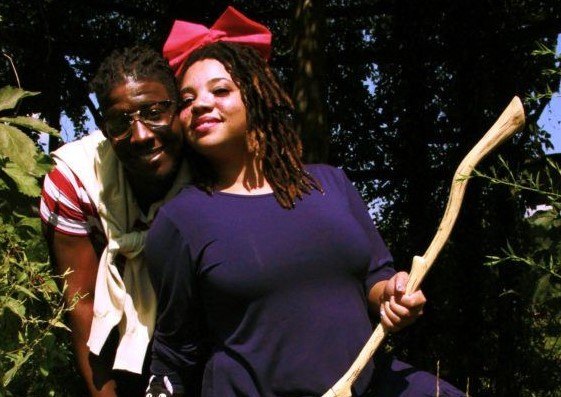 As a huge Studio Ghibli fan, I internally squealed when I saw the CUTEST Kiki and Tombo couple pictures on Instagram. I absolutely love Ghibli odes, and the photo shoot done by Onkey Cosplay and JuiceMan Cosplay has got to be one of the SWEETEST ones I have seen. It’s perfect for those who prefer a more cozy and wholesome vibe to this month of Halloween. I was lucky enough to be granted an interview with them both, so please enjoy!

BNP: Please tell us about yourself! What’s your origin story and how has your Hero’s Journey been so far? (For both of you)

Key: My name is Key, and I am a Black woman cosplayer! My Blackness has been, and continues to be, the most formative aspect of my personhood. As someone who is pursuing a PhD in Afro American Studies, being Black is a part of everything I do, including my cosplays. I try my best to incorporate my own flares to all of my costumes. Cosplaying has been a fantastic journey so far and I am thankful that my partner, Juiceman Cosplay, pushed me to become a cosplayer. I have participated in many cons and contests, and I am currently cosplayer of the year for Untitled Nerd Network.

Jamarri: Name’s Jamarri, my friends call me Juice or Juiceman, and I’ve been a Blerd since forever. I was always into superheroes as a kid, making my own stories and drawing characters I saw. (I still have sketchbooks around.) My uncle put me onto manga and anime when I was 5 or 6 with Knights of the Zodiac, Speed Racer, and Hajime No Ippo; and then Pokemon and Toonami came in and the rest is history. John Stewart (the Green Lantern) was and still is an inspiration as he was a Black man who didn’t hide behind a mask. In college, I was dubbed the Green Lantern kid as I always had my signature GL backpack and ring on. I started attending cons in 2013, with Rhode Island Comic Con being my first, but it wasn’t until 2017 I cosplayed for the first time. I shared a photo of me in a Spiderman workout shirt and after taking some advice from friends, I ordered the PS4 Spiderman costume which I debuted at Bing Comic Con that year. It just so happened this was also where I met my friend, who became my first photographer and got me to join their charity group, The Band of Heroes, that started me on my path to being an actual cosplayer. It’s been an amazing journey. I’ve made so many friends and memories, and now I’ve got Key in on it as well!

BNP: How would you describe your cosplay style? How do you create? Do you have any special plans coming up for the month of Halloween?

Key: I like to incorporate Afrocentric aspects into my cosplays; especially my hair. Historically, Black hair has been a site of heated politics for many Black women. There’s been so much negative stigma around Black hair. The majority of my cosplays display my locs at the forefront not only as a way to combat negative ideologies about Black hair, but also to show how beautiful and versatile Black hair can be!

I do have a photoshoot planned for the month of October in some Slytherin gear! Stay tuned! Juiceman Cosplay and I also recently purchased a home and are decorating it with a Kingdom Hearts theme! I share daily updates on the renovations, and we plan to host a watch party of the finished product some time in November.

BNP: Who or what inspires you when you cosplay?

Jamarri: I started officially cosplaying to help a charity group, so I guess that was initially my inspiration. But when I cosplay for myself, I usually cosplay as characters I relate to or have found inspiration in their story.

BNP: If you were in any Halloween or macabre or scary film, which one would it be and why?

Jamarri: I would love to be in a Jordan Peele film because he deals with the issues that plague Black America. Also, the soundtracks are always dope.

BNP: Who would your top five scariest protagonists for an all-star team be to save the world?