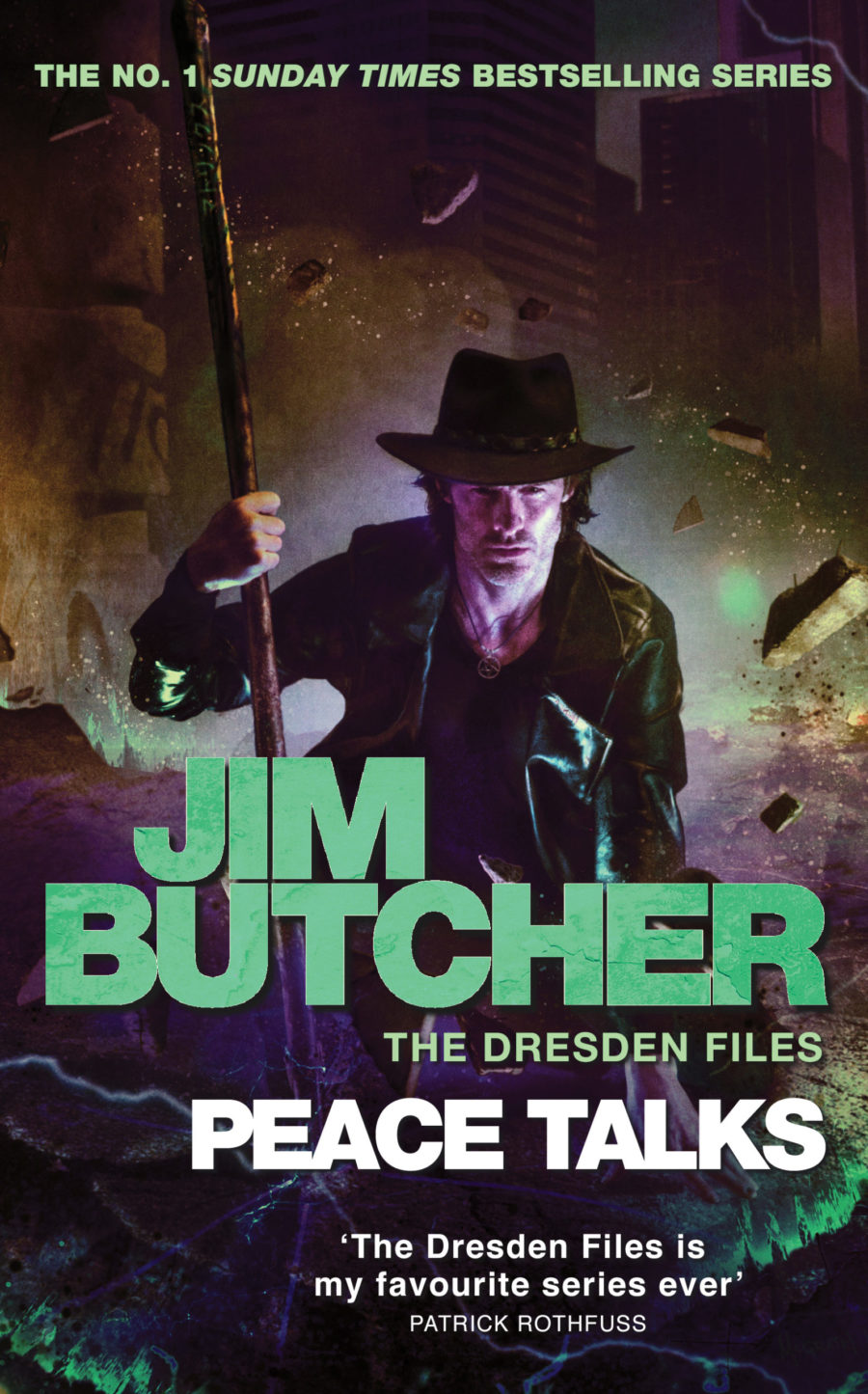 First of all, let’s get this out of the way. I am a Jim Butcher fan. Point blank period. I love his writing, I love his characters, I think he is the reigning king of the urban fantasy genre. There are acres of pages out there dedicated to Dresden-lite characters. A bunch of copy-paste gumshoe wanna-be wizards out there that couldn’t hold a candle to the current Winter Knight. Jim Butcher has written us a wonderful world, with ninja goblins, murderous fairies, Biker Santa, the genocide of an entire race of vampires and places it all lovingly on top of the Windy City.

I mean, Butcher’s writing credentials are bona fide, he made me fall in love with steampunk via The Aeronaut’s Windlass (and I hate steampunk) and he wrote a best-selling series (The Codex Alera)  on a double dare, based on two horrible writing clichés (Pokemon and a Lost Roman Legion). Peace Talks is book 16 in this series. Book 16! And up to this point I could only point to one book (*cough* Ghost Story) that I thought missed the high mark that Butcher has created. When Jim Butcher drops a release date, I generally clear my calendar and prepare to dive in.

I wanted this book to be great. I expected it to be good. It ended up being, ok.

Earlier this year I was overjoyed when I found out that after an almost 6-year layoff, Butcher was going to bring us back to the Second City with Peace Talks. As a fan I was ecstatic, I couldn’t wait to dive back into Harry’s life and see what was going on since Harry and the Gang robbed Hell in Skin Game. I wanted this book to be great. I expected it to be good. It ended up being, ok.

Now granted, 6 years is a long time, and I knew there would be some ring-rust. I read the first few chapters and I could see the stiffness in the syntax and sentences but as I wound my way into chapters 4 & 5 I saw Butcher seemingly shake of that ring rust and get back into form. But much like a UFC fighter who’s had a long layoff, Butcher’s cardio just wasn’t there. I wanted to like Peace Talks. No, I wanted to love it. But after reflecting, and a quick re-read, I’m not sure if I would rank this higher than Ghost Story…and I hated Ghost Story.

…all of the sudden you have to try and kill your grandfather because you’re afraid to tell him that your half-brother is a White Court Vampire. Is this Peace Talks or Maury Povitch?

A few points of contention I had with Peace Talks.

Listen, I get it, it’s been six years. It’s been awhile since we last saw Dresden, we’re in a pandemic and of course we got the 2020 curse to deal with, whereas everything that touches 2020 seems to be infected. But I expected more, maybe that’s my fault. Maybe I had hyped The Dresden Files up in my head as this unassailable fortress from which urban fantasy is launched. This is what happens when fandoms place series on pedestals: they are bound to fall eventually right?

I’m also willing to stipulate that I’ve been reading some grimdark epic fantasy and maybe I needed to merge my way back into Urban Fantasy. I’m knee deep in Malazan Empire right now, so it entirely possible that I hadn’t shifted that reading space in my head. Imagine, listening to playlist with nothing but A Tribe Called Quest but in the middle of that, someone snuck in a Metallica song. Doesn’t mean the song was horrible, could be that I just wasn’t ready for it at that time. I hope that’s it, I want that to be it and yes I know I’m making a few excuses here, but that’s because, I’m a fan of Butcher, and Harry Dresden, wise cracking wizard is one of my favorite characters of all time.

But here’s the saving grace, much like Harry Dresden, I’m not quite willing to count Jim Butcher out. Ring rust is real and I’m willing to let this one go, give it a mulligan, in the same way I’m willing to pretend that Ghost Story was just a really bad dream. We got Battle Grounds coming up in about 2 months. I am going to save full judgement until then. Because If I really had to rate Peace Talks on its own merits, I’d be forced to give it something like a 2 out of 5. And I don’t want to do that. You don’t want me to do that. Mouse would bark at me and Michael Carpenter would slowly shake his head in disappointment.

Luckily I still believe Jim Butcher has it in him, and much like Harry , he’s holding a hidden ace up his sleeve ready to even the odds

So I’m not going to do that. I’m going to siphon Peace Talks off in my brain and convince myself that I just read the first half of the book and I’ll read the second half in a few months. After Battle Ground drops in September, I think we’ll all have a better idea of where the series is going. I hope it doesn’t go the way of the Red Court, The Dredsen Files deserves a better send off than that. Luckily, I still believe Jim Butcher has it in him and much like Harry, he’s holding a hidden ace up his sleeve ready to even the odds and get everyone’s favorite parkouring wizard back on track.