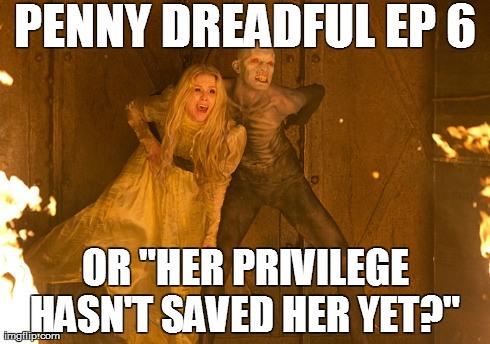 This is the first recap for Penny Dreadful aka The Masquerade version of Downton Abbey aka The grown and sexy Supernatural. Where we left off last week was the Murray crew torturing their prisoner with “vampire” tendencies t in order to gain some info on his “master”. We also saw Vanessa Ives, Dorian Gray, Ethan Chandler, and Brona Croft enjoy a day at the theater. Long story short, The prisoner escapes and an encounter with the “Master” happens in Vanessa Ives room. The prisoner gets killed and the Master escapes seeing that Ives wasn’t present. Meanwhile at the Theater, Brona pushes Ethan away after that awkward moment where you are in a conversation with a client (gray) that paid for your services (sex). Gray sees Ethan take that hit so they skip the second act of the theater go out for a night on the town and then each other.

We start this episode off with Malcolm Murray frustrated and asking Vanessa if there is anything she can do to reach out and find another lead to his daughter Mina. Malcolm throws Mina being the only family he has left now in her face and Vanessa tells Malcolm he isn’t the only one that has lost family. Ives shoulda told him, “First off, don’t talk to me about losing family. My mom walked in on me possessed and getting it on with an invisible demon, then died on the spot. Second, do I look like a fucking ouji bored bruh?” Ives however goes to her tarot cards for clues which is apparently a rotary phone hotline to the supernatural. She feels some kinda remnants of some supernatural dirt going down on a ship/shipping yard. Malcolm thanks her and makes preparations to check it out. They get interrupted by “Mr. Steal yo giiiiiiiiiiiiiiiiiiiiiiiiiiiiiirl” himself Dorian Gray.

Dorian invites Vanessa out to paint the town blood orange (the show is that pretentious that they would say that instead of red) as an apology for ditching her at the theater. What follows is a very highbrow conversation over eternity as Mr gray has arranged for Vanessa to have her photo taken. Dorian makes a key detail in saying he prefers painted portraits for the way they capture forever as pictures just capture a moment. Vanessa was showing some neck so I am assuming this is the Victorian era version of sexting a nude photo. If she had shown some ankle Dorian would have lost his shit. Cut to Victor Frankenstein coming up from his latest autopsy and asking what the group’s next move is. Malcolm Murray lets him know “Aye, you going sit this one out. This is a “hunting” expedition and you aint bout that thug dirt we about to do son”

Victor makes a J. Cole face about the situation then goes about meeting with Hematologist (blood specialist) Van Helsing again as they discuss work. Van Helsing reminds Victor he shouldn’t keep his head in his work so much. He gives him an old head tale about how he met his wife after looking up from some dope ass blood samples then seeing the blue dress she wore. Victor goes full on in the gothic emo talking deep in the morose and quotes Shelly stating, (Victor Frankenstein quoting Mary Shelly was a great touch of irony) “what death can join together”. We know he is talking about his experiments with bringing people back from the dead. Van Helsing doesn’t but he knows it something to that extent as he says “alright man, whats the story with you and is this a necrophilia thing?” while thinking

Dorian drops Vanessa off after their photo shoot and Ives takes some initiative and asks “What that four course meal do?” Which makes dinner a plan now. After a quick change and “oooooooOoOOO kill’em” compliment on her dress from Malcom Murray, Vanessa is gone. Soon as Malcolm Murray hears that door close. He starts getting them ratchets out, top hat and cane too. He and Semebene meet up with Ethan Chandler. Ethan patched things up with Brona and is rocking her iced out Saint Jude necklace for protection. They enter a shipping yard type of warehouse that looks like The Carter from New Jack City if it was renovated for strung out vamps.

The vamps are all women but none are Mina and they are all dead… you know that ain’t stayin true for long. They all went from Pookie to turn down for what in like 5 seconds. We get a good shoot out and display of knife skills from Sembene. Cut to a  glimpse of Mina being held by the a big ass undead vampire lookin mofo as they escape yet again.

Vanessa Ives is exploring the room acting like she give a damn bout Dorian’s interior decorating as he comes up on her asking, “whats good with me getting consent to kiss your neck right quick?” To which Ives replies, “Don’t ask permission. If you want to do a thing, do it because it is your desire not my allowance. You must risk rejection”. Personally, I woulda took it to an agreement  where we both sign cause you start dropping bars like that…I’m covering bases. But this is Mr. Steal Yo Girl Dorian Gray we talking bout, so he went all upside her safe space like the kool aid man coming through the wall after three “oh yeahs”. They took it to the bedroom and Gray pulls out a knife and Vanessa is like, “Word? Bet.” Then proceeds to go all Zorro across his chest.

Vanessa reenact Ciara’s “Ride” Music video as  sheis about to reach the peak in her “Georgia O’ Keef Calender” if you will, when the Dark Side calls to her saying, “What up doe…. we been waiting for you girl” which makes her grab her shit and bounce like she forgot she left the lights on. Dorian has the “Oh..you just goin… leave. Alright, I’ma just go to the back and sit in front of this mysterious painting that’ll heal me as I stare at it. …call me?” face on. It should be noted that Gray has now slept with Ives, Ethan Chandler, and Broana Croft…. it’s like he is reading “Making the * by Robert Baratheon

Van Helsing finally tells Victor the shit he and Malcolm Murray are getting into. Van Helsing was like yeah remember I told you bout my wife, the girl in a blue dress I looked up and saw?, yeah. She ain’t die of natural causes homie… I drove a stake through her heart and cut off her head. Yeah. Now tell me… the fuck you know about vampires my dude?” Helsing breaks this supernatural shit down to Victor (by use of a Penny Dreadful no less) and this is the first time we hear the word “Vampire” which will be used as cannon in the series. Van Helsing gave Victor an ill heart to heart saying, “Look man this is some shit you dont need to be into. These vampires moves like wolves and the “G” in Lasagna. Silence son. Some cats get a long hard love, your life wont be easy but I want it to be long”. It was a great moment of a budding mentor relationship beteween the two…. then Frankenstein’s Monster (who goes by Caliban) came out the cut, yoked up Van Helsing then gave Van Helsing that “I whip my hair back and forth” / “Dutty Wine” neck snap. Sun… that shit was so uncalled for.

Granted Caliban had a rough day. An actress came down to his working quarters in theater to get a prop fixed. He hides his face while fixing the prop, so she talked about her brother who was scarred like him. How his his name was Lucifer. Caliban fixes the prop then leaves a book in her room, he camps in a vent and watches her open it. The first page is Lucifer as an angel…then her man steps in asking if he should be worried bout her secret admirer. She gives him that “Naaaah you good bae” line with a kiss and Calibaaaaaaaaaaaaan was cryiiiiiiiiiiiiiiiiiiiiiiiiiiiiiiiiiiiiiin doooe.
After that shit he was not giving any fucks cause he wants his undead companion made right now so he had to roll up on Victor’s emotions as if he asked himself “What would rust Cohle Do?”

The end comes upon us as Ives walks into Malcolm’s study. Malcolm is about to tell her the full truth (that she is being hunted by the devil) but then Vanessa starts levitating and spinning in the air 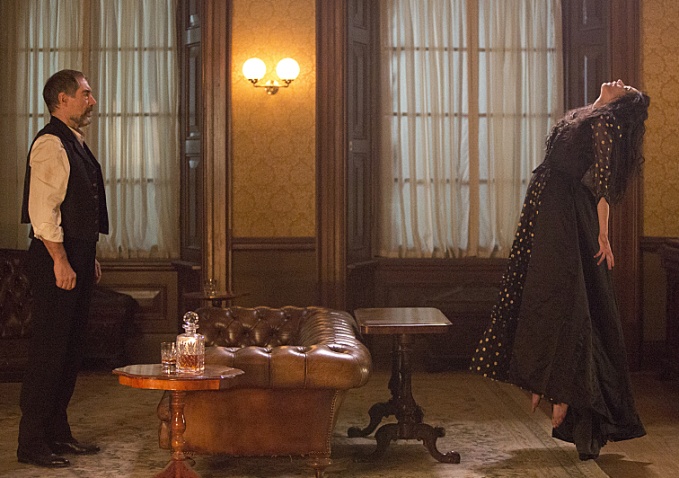 Something tells me she probably knows that part already.