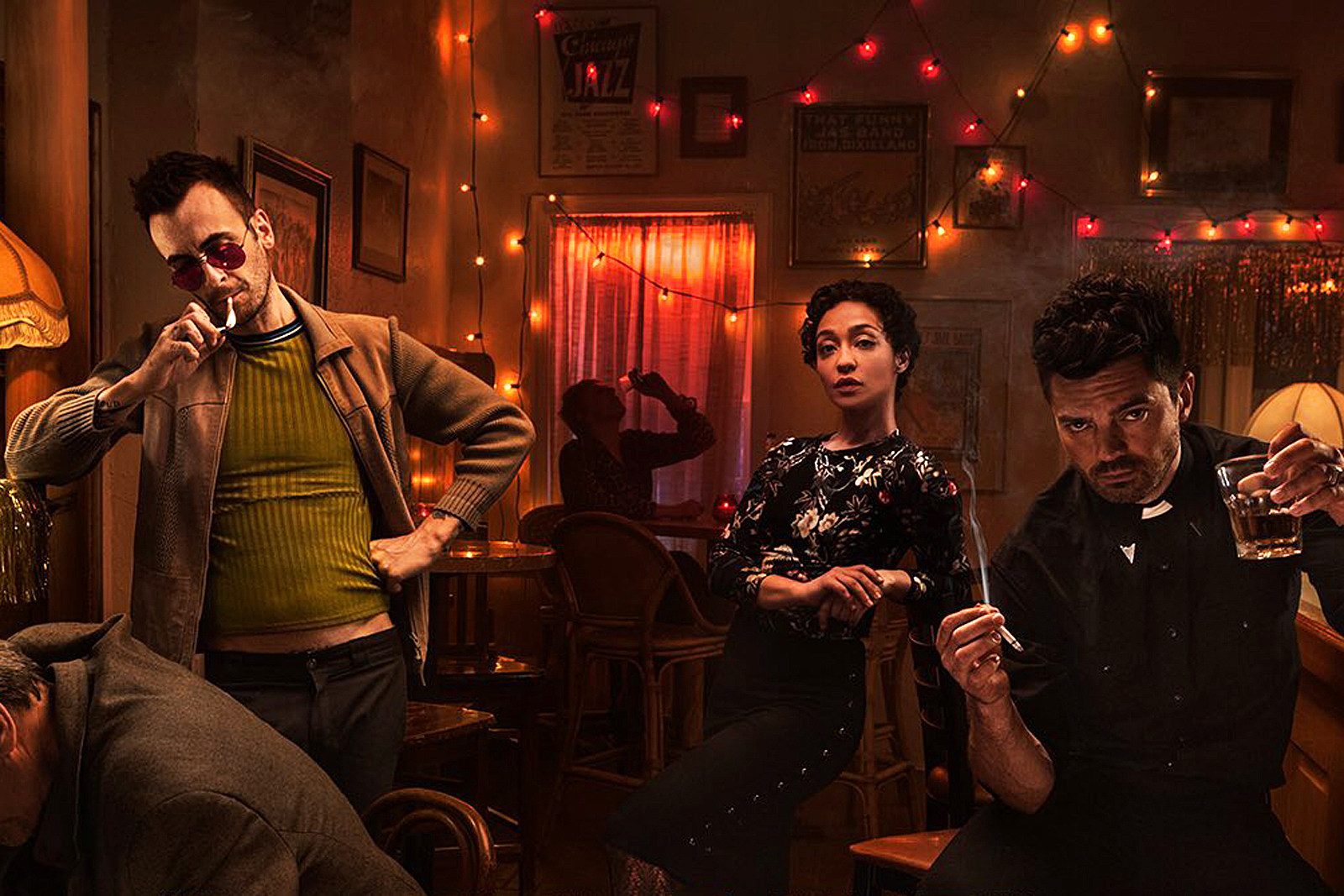 Episode three goes hard in the paint! It opens with Tulip feeling guilty as hell for letting The Grail keep Jesse’s soul. So guilty, in fact, she drives all the way back to NOLA Grail headquarters with the choppa on deck! This ain’t that new school John Wick tactical pressure points and MMA holds. Nah, she came through on that early 90s Tango & Cash, maneuvering the whip in traffic holding the nina in hand type vengeance, pumping thrash metal through the speakers.

Tulip makes this whole dramatic entrance, only to find The Grail closed up shop and left nothing behind but business cards, ethernet cables, and that big ass picture of Jesus.

Defeated and on the way back to Angelville, the car radio is taken over by static, then jazz. Tulip checks the rearview and sees Man-Dog (aka God) on a Harley with a trashy blonde. God pulls up and tells Tulip in few words that she’s a screw-up, her daddy’s a screw-up, and that the “curse of the O’Hares” is by His design. Really he thought he was being godly, but he came off like a condescending dick. He gently strokes her cheek and tells her to “not despair.” Tulip shrugs that shit off and walks after him like he ain’t shit.

Tulip gives him a verbal one for and sets it off on Him. God, in turn, goes super Saiyan level 3, and dead blasts her with a basic Hadouken. Tulip hits the back of the car, eats that like a champ, get’s up, and promises to kick God’s ass. This one might be my favorite opening of the series.

We pick up with everyone’s favorite smart-ass Irish vampire in the midst of battlefield triage with TC. Cassidy and TC love drugs (particularly inhalants), and the latter whipped something up as an anesthetic for the surgery. It’s all fun, games, and schnozzberries until Cass starts reminiscing on the many (many) times he’s been maimed by jealous husbands and wives. While Cass is reliving his Frank Ocean years, TC remarks how strange it is that Cass has no scars. If people think TC is not smart, they wilding. TC removes the bullet and heads out to get some ‘swamp consomme’ (roadkill juice, literally) for Cass; Cass pulls out a blood bag and goes to town. We get two really cool shots from inside the wound; one with TC digging in to find the bullet, and the other of the wound closing supernaturally quick as Cass is sipping on the blood bag.

Jesse and Tulip get some alone time and are promptly interrupted by Jody, but not before a dire warning is issued: “Don’t go near my grandma, she’s dangerous.” Jesse and Jody hit the kitchen and are joined by TC who shares how well Cass is healing. This peaks Jody interest, but before they can get into it, Tulip comes down and everyone else heads out. However, TC immediately asks Tulip if she would like to “see his dingle.” The innocence on his face, disturbing; the returned side-eye, legendary.

Jesse heads up to check on Cassidy and warns him about the folks they’re staying with, then lets Cass know how he really feels.

He tells Cass that he’s his best friend, and as a result, immediately tells him to jump out the window. Cass is dumbstruck and thinks it’s about Tulip, but Jesse reminds him of the picture in the staircase, which we saw in the “Angelville” episode – only now it’s the (super cool) animated burning of a body! Jesse, upon hearing footsteps approaching, grabs a knife and stabs Cass in the bullet wound! Then, Jesse picks up the blood bags just in time for TC and Jody to barge in the room.

Tulip is stubborn as all hell. How do we know this? Because she is rummaging around in Madame Marie’s room of macabre goodies like it’s all good! Preacher knows how to give a lot in a small window, and this is a great example. Dried up body parts, skeletons, wards, talismans, and everything! It’s a veritable bodega of voodoo artifacts right down to the cat chilling on the Wonder Bread. She finds the picture of baby Jesse and an urn filled with Swedish fish. Most notably, she comes across an antique rotary phone with no rotary, picks up the receiver only to hear faint static, then a distorted voice asks, “Who are you?” She simply moves onto the next thing of interest – a drawer with a bloody handkerchief poking out. After picking the lock, she finds hundreds of handkerchiefs, filed, organized, aged, and soaked in the blood of someone’s mistakes. On her way out, she bumps into TC and offers him the opportunity to show off his ‘dingle.”

We catch up with Jesse while he’s doing Marie’s bidding: collecting souls. Jesse is out here looking like the hoppers in The Wire. He is trying to get this product out to the most desperate people! Jesse rolls up in a church space that is doubling as a ‘huffers anonymous’ group session. He fails to get anyone to come to Marie for a spell session, but he does gets an eager inquiry about ‘The Tombs.’ Empty handed and frustrated, Jesse heads back to Jody’s truck where they head off to the next stop.

Inside TC’s meager home, he is standing butt ass naked in front of Tulip, making excuses for the appearance of his ‘dingle.’ Tulip strokes his ego, seeing an opportunity for inquiry. Tulip asks about the handkerchief, and TC reveals that each is a contract whose debt can only be paid when Marie says it’s paid up. Tulip suggests that it can be physically broken then, like a marriage document. TC tells a story that undermines that idea entirely in a very cool Vincent Price/John Waters film looking flashback. Tulip needs a new plan, leaving empty-handed and leaving TC with a baby gator on his ‘dingle.’

Cass visits Marie for a moment of chat and asks why if she can heal people, why she’s still in a wheelchair. Marie replies, she’s “working on it.” Cassidy confesses that he isn’t a bad person, but that he’s willing to do a bad thing to do a good thing and that he isn’t leaving Angelville without Tulip. Cass walks out of Marie’s den with a bottled love potion spell right as Jesse walks in and is called in by Marie. Jesse shares the day’s low numbers, and Marie implores him (with a backhand across the face) to open The Tombs to get the numbers up.

~Cut to late night on the Angelville Estate~ Cassidy roaming the hen house on the outskirts of the swamp. He eyes a juicy hen, grabs it by the head and legs, and then drinks hungrily. The ‘squawk’ gets TC’s attention, and he puts a gun to Cass’s head and hollers out for Jody.

Tulip visits the rival voodoo clan, run by Madame Boyd, who has taken over since Jesse left town. Looking for a workaround to Jesse’s blood compact, she comes up empty but gets to meet Madame Boyd face to face. Turns out, Tulip’s reputation precedes her.

TC and Jody string up Cassidy and call Jesse over to verify he knew nothing about Cass’s vampirism. TC and Jody decide that target practice is a good way to pass the time until the sunrise cookoff. Jesse says he has a better idea: he reopens The Tombs.

Looking like a deleted scene from The Greatest Showman, Jesse goes full Barnum and Bailey meets Mean Gene Oakerlund! Top hat and all that! He introduces the first fight to an audience composed of the entire huffers anonymous group, including the pastor! In one corner: the pedophile science teacher once on the vice principal track; in the other corner: Cassidy. The episode closes on a somber and conflicted Jesse, in a top hat.