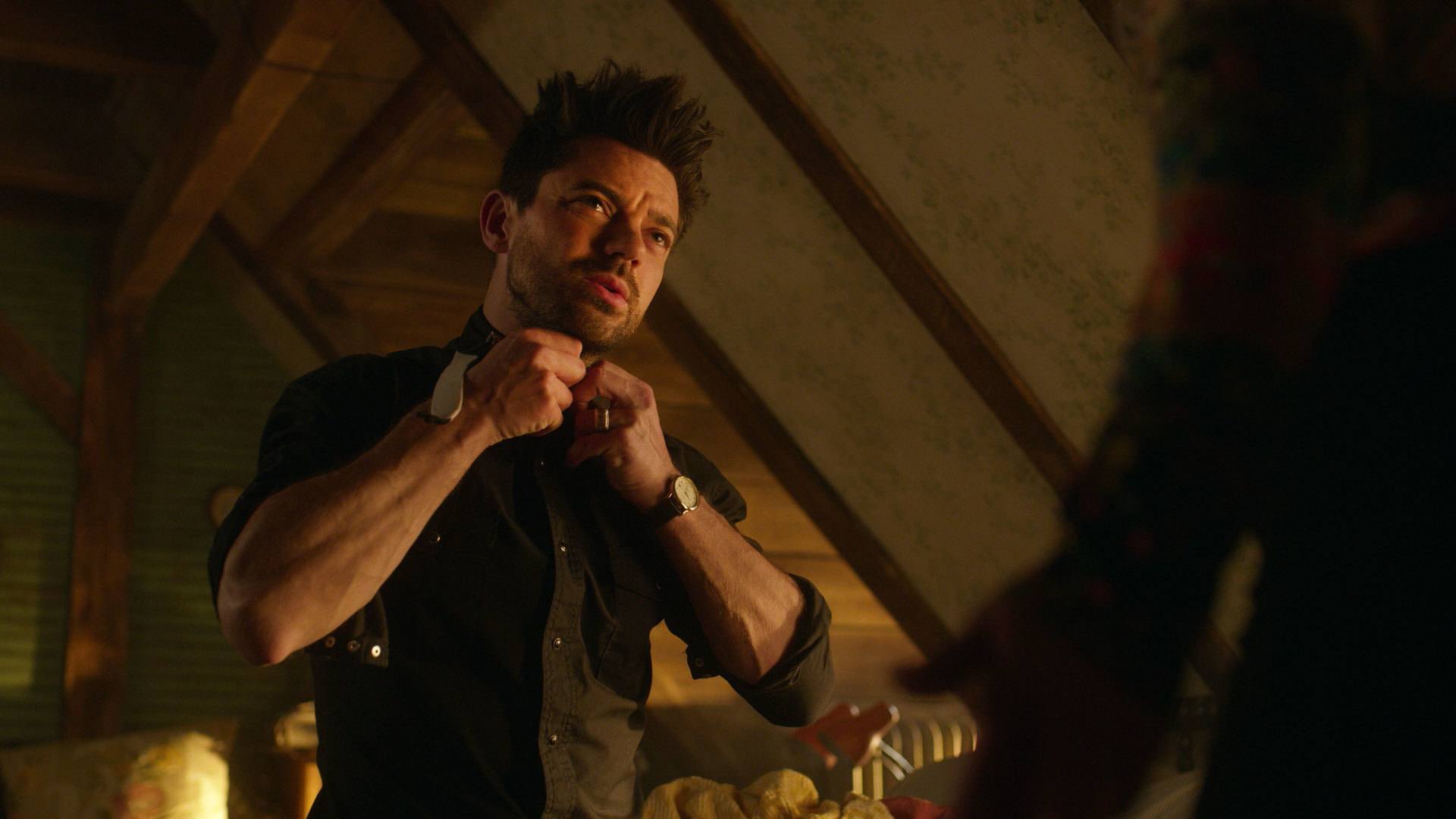 Welcome back to the #ungodly bayou y’all!!

Episode 5 opens up with Tulip rolling up in the Angelville Estate with the gun out! She’s got murder on the mind, and Marie L’Angelle in her sights! Tulip has her lined up looking like the Public Enemy logo. After a few tense moments, she changes her mind, puts the gun away and heads upstairs.

Cut to: TC dragging a whole ass pig to where Cassidy is being held, only to find out that he’s gone. Again. He hollers out to Jody that Cass is gone and soon after that come across the skinned face of the pedophile science teacher. Jody decides he’s had enough of Jesse’s meddling and seeks to rectify this with a good old-fashioned ass-whooping.

Tulip sits in bed with Jesse and wakes him with hypotheticals about the ethics of killing his grandmother. Subtle, right? They talk about the finer points of killing her but are interrupted by the hulking steps of Jody walking upstairs. Jesse and Tulip piece together that jig is up about Cassidy getting out, and Jesse asks Tulip the question she’s been waiting all her life for.

If you thought TC couldn’t creep you out further, he goes straight hillbilly ninja. He comes down slowly from some hidden compartment behind Jesse and Tulip!

Then it’s a TLC match for the tag team championship! Jesse goes to work on Jody while Tulip and TC throw each other around the room! TC throws Tulip through the bathroom door and each of them scrambles to find something to kill the other with. “Found object, bathroom weaponry.” TC grabs a roll of TP (see what I did there?), douses it with nail polish remover, and puts it on the front of a hairdryer…And it lights on fire!?! Like a blowtorch?!?!

Jesse is hitting Jody all up in his pressure points, doing his best Batman impersonation; but you know what it is…Jody just brushes that off and starts giving Jess that work. He gets Jesse in a hold and puts him to sleep. 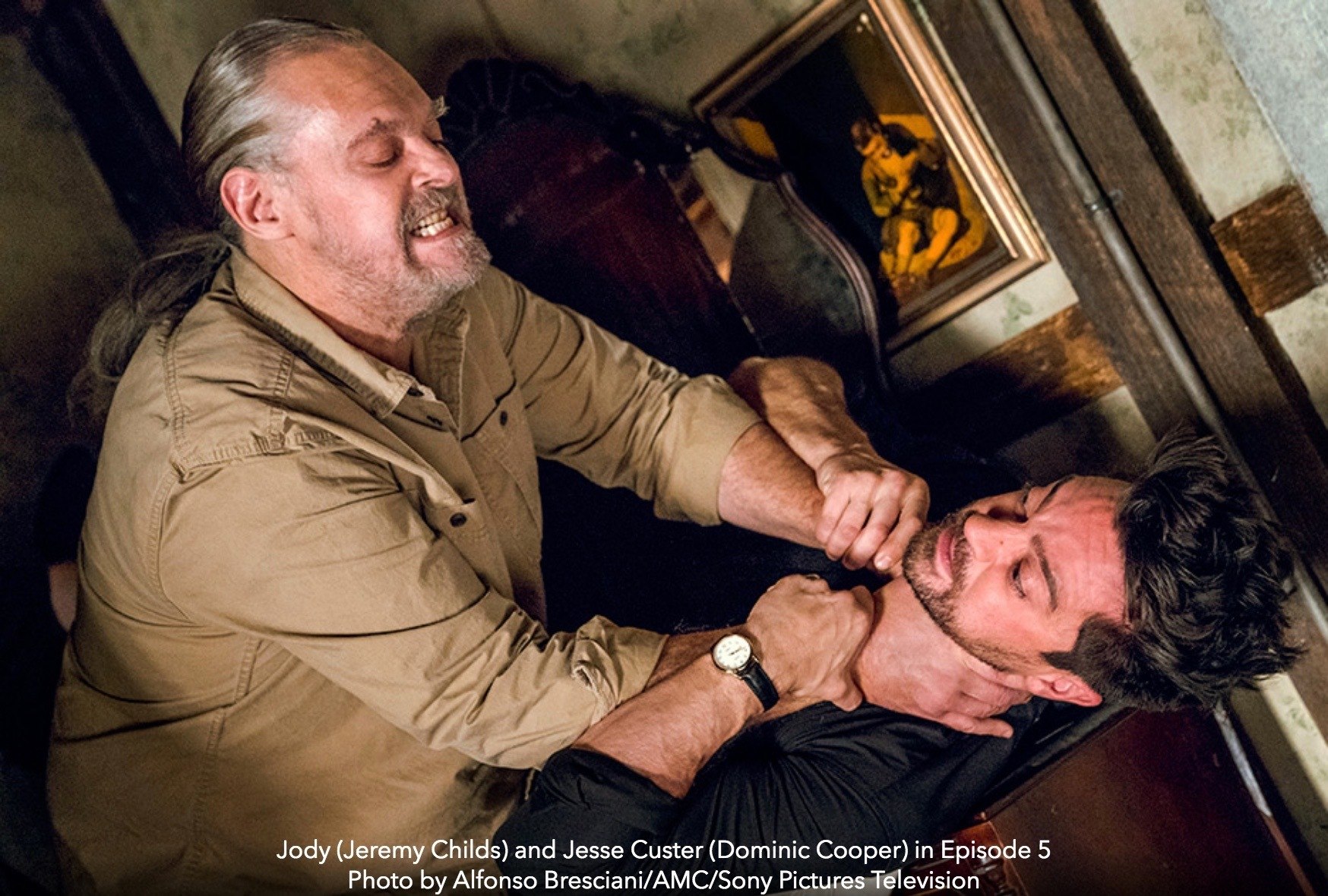 Tulip knocks out TC and heads for the front door in pursuit. She catches up with Jody at the front door and puts the gat to him. He puts Jesse down and Tulip is shocked to see Jesse gasping for breath. Of course, Grandma is holding that bloody handkerchief with all her strength – choking the life from Jesse. Tulip surrenders.

When Jesse comes to, he’s in a small, dark, quiet place. He’s in a coffin! At the bottom of the swamp! With a self-contained, hydraulic system for air!

We pick up with The Grail as they prepare to roll out Humperdoo as the Messiah (in lieu of Jesse). In training, Humperdoo greets heads of state, which he screws up royally – by sucking the ring finger of The Queen of England. Herr Starr gets a FaceTime call from the person he answers to: the AllFather aka The Pope John Gotti! The AllFather wants to know how far Humperdoo’s progress is going, and asks Starr for a demonstration. Cut to: Hoover singing the “old soft shoe” and Humperdoo getting his Bojangles on for the AllFather. Not for nothing, Humperdoo ain’t that bad with the tap dance routine!

He ain’t no Gregory Hines, but more importantly – he ain’t no Jesus either. However, the AllFather gets a kick out of it, and says that Humperdoo’s reveal should be fast-tracked! Starr is out of options but Featherstone says she has an “interesting” idea…

Back in Angelville, Tulip is chained to a radiator on some old Black Snake Moan business while Marie, Jody, and TC inform her that Jessie is in ‘time out’ (in a coffin) and attempt to scare Tulip into fright. They don’t know that she doesn’t scare. At all. Ever.

Marie says in just so many words that Tulip owes every second of her life to Marie’s spell. That she owns Tulip down through her soul. Marie admires that spark in Tulip, enough to take that spark from Tulip herself.

We finally catch up with Cassidy, just out the packing box he was shipped in, bloody shirt and all. What could he possibly be doing, oh yeah, looking for a match on Bite Me aka Vampire Tinder while picking up some elephant tranquilizers. Elephant. Tranquilizers.

Back to Jesse of the seas. Jesse has spent time in this coffin before, that was a minor flashback in season one. Seeing him in this thing now is terrifying! He flicks open the lighter, and now we can see the scratches inside. One stands out prominently, it reads, “Tulip”. Jesse starts losing his composure and does what he can to keep his wits. Calling out the capitols of states seems like the end of the line. Then we hear a voice, a voice that remembers Jesse, one famous in the annals of Americana – notorious for glorifying the genocide of First Nations people in the name of Manifest Destiny: John Wayne!

Jesse whisks himself away to his mind palace: a scene straight out of the classic colonizing epic, El Dorado (1966).

Wayne even got the same white bandana on! Wayne and Jesse get to shooting up bandits and whatnot but Wayne tells Jesse that he’s just avoiding the inevitable.

Cassidy meets his Bite Me date, BirdGirl666, and just goes in about all of the depressing things he’s been through. He laments being a vampire entirely. He asks her age, and she tells him two-hundred, he replies that he’s eighty-nine. BirdGirl assures him that the time vampires spend in solitude make the moments of connection mean more.

Cut to: they’re in the bar bathroom getting it in. Clothes start coming off and as it’s about to get more intimate BirdGirl asks for a second to get something: and puts in a set of fangs. Meaning: she’s not a vampire! That set Cass off! He fangs out and threatens BirdGirl with a real vampiric good time, but doesn’t bite her, and just leaves. We leave Cassidy at the bar as he orders two bottles of whiskey, takes one to the face then like half the bottle of elephant tranquilizers! BirdGirl leaves the bar, walking right past a well disguised Agent Featherstone.

Meanwhile, we find Tulip under close watch by Jody. She’s still chained to the radiator, but better safe than sorry, right? Jody’s doing the crossword puzzle while Tulip is sneakily looking for something to pick her locks with. She gets real close to getting one before Jody notices and decides to guard Tulip a whole lot closer.

TC and Marie are thinking of ways to punish Tulip and get info on where Cass might be. After a little back and forth, TC notices that Marie’s morale is low and offers to ‘play’ a little to get their minds off the issues at hand.

Cut to: Jesse in the coffin. After inception-John Wayne reads Jesse for filth, he wakes back to his situation with one thing on his mind: Tulip. After some The Martian level science shit, Jesse manages to blow the whole coffin up and swim to the surface!

Back to Marie and TC, standing in the grand foyer in full Civil War-era regalia! If it was weird before, it only gets weirder. We catch them in the midst of a steamy role play scenario where they are forbidden to be together. TC approaches Marie and places a hand up under her many frocks, but Marie reaches for his junk – and TC can’t get it up. Marie loses her cool, and TC looks like a small dog being scolded. Marie gets real comfortable and pulls off her wig to reveal a whole lot of nothing! She’s grey and freckled. Marie sends TC to fetch Tulip so she can ‘eat her soul’, and says it in an otherworldly voice!

TC walks into the room upstairs to see Jody laid out on the ground and Tulip nowhere to be found! He turns around and Tulip knocks him the hell out! Tulip heads down to Marie’s room to finish what she started. 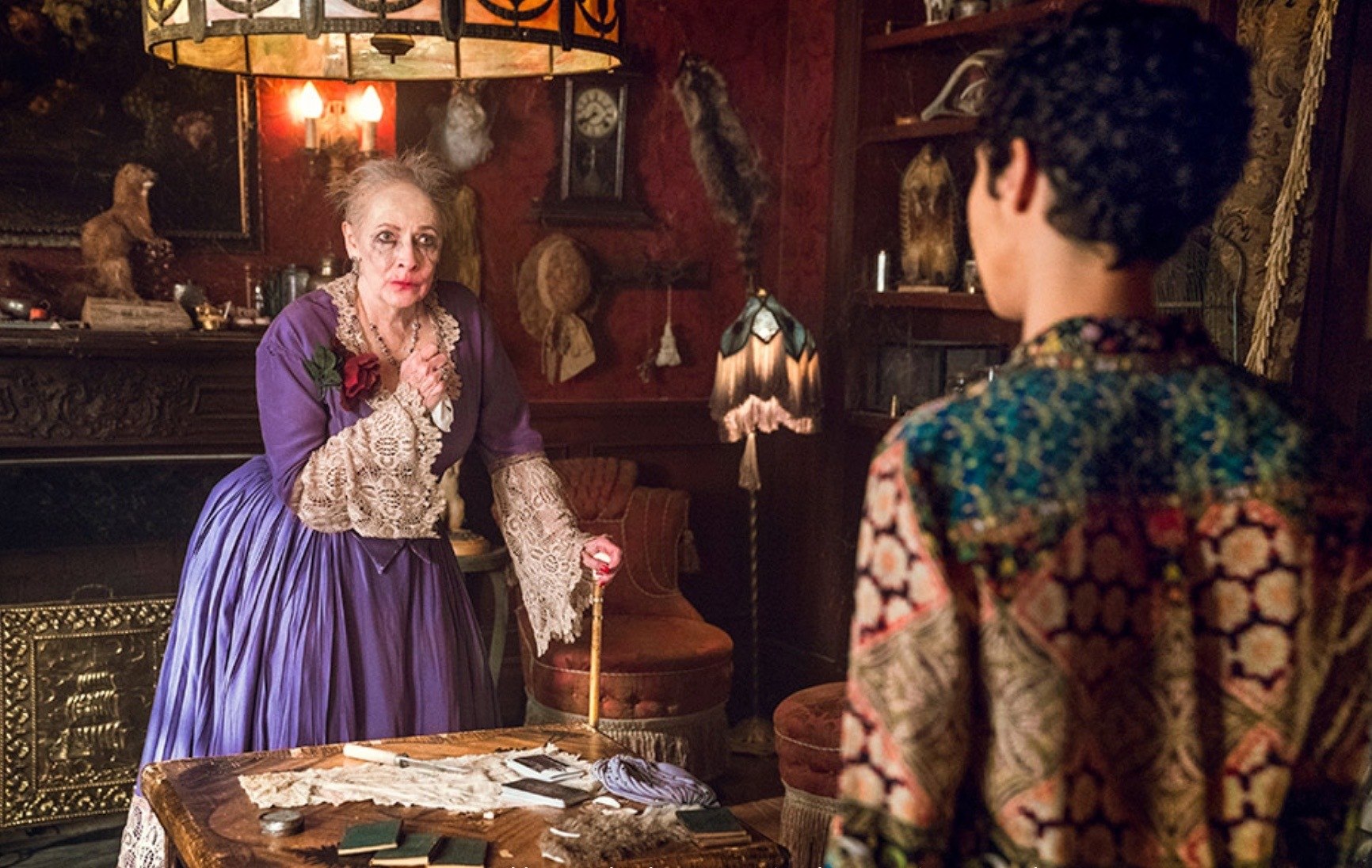 Marie and Tulip tussle for Jesse’s freedom and all the marbles! Tulip gets the win, and kills Madame Marie L’Angelle! Jesse walks into his grandma breathes her last breath. Then Tulip falls to the floor like a puppet with its strings cut and dies.

Jody and TC walk in and Jesse tells them to get the adrenaline from the tombs! Jesse goes to help Tulip, but TC says he’s helping the wrong one: the spell ties Marie and Tulip together for life! A fail-safe to ensure Jesse never kills his grandma. They hit Marie with the Pulp Fiction treatment and she pops up! Then Tulip pops up! Some tense glances fill the room. After a bit, Jody, Tulip, and Jesse sit at the table and figure out what the hell to do next. TC enters with the ‘bad news’ look on his face. He says that Marie ain’t doing too good, the adrenaline put a strain on her heart. Tulip knows this means that she can die at any minute. Instead of talking it out like civilized folks, they start throwing hands in the living room!

We close on Cassidy, who was taken by The Grail at the bar and forced to record a hostage video meant for Jesse. 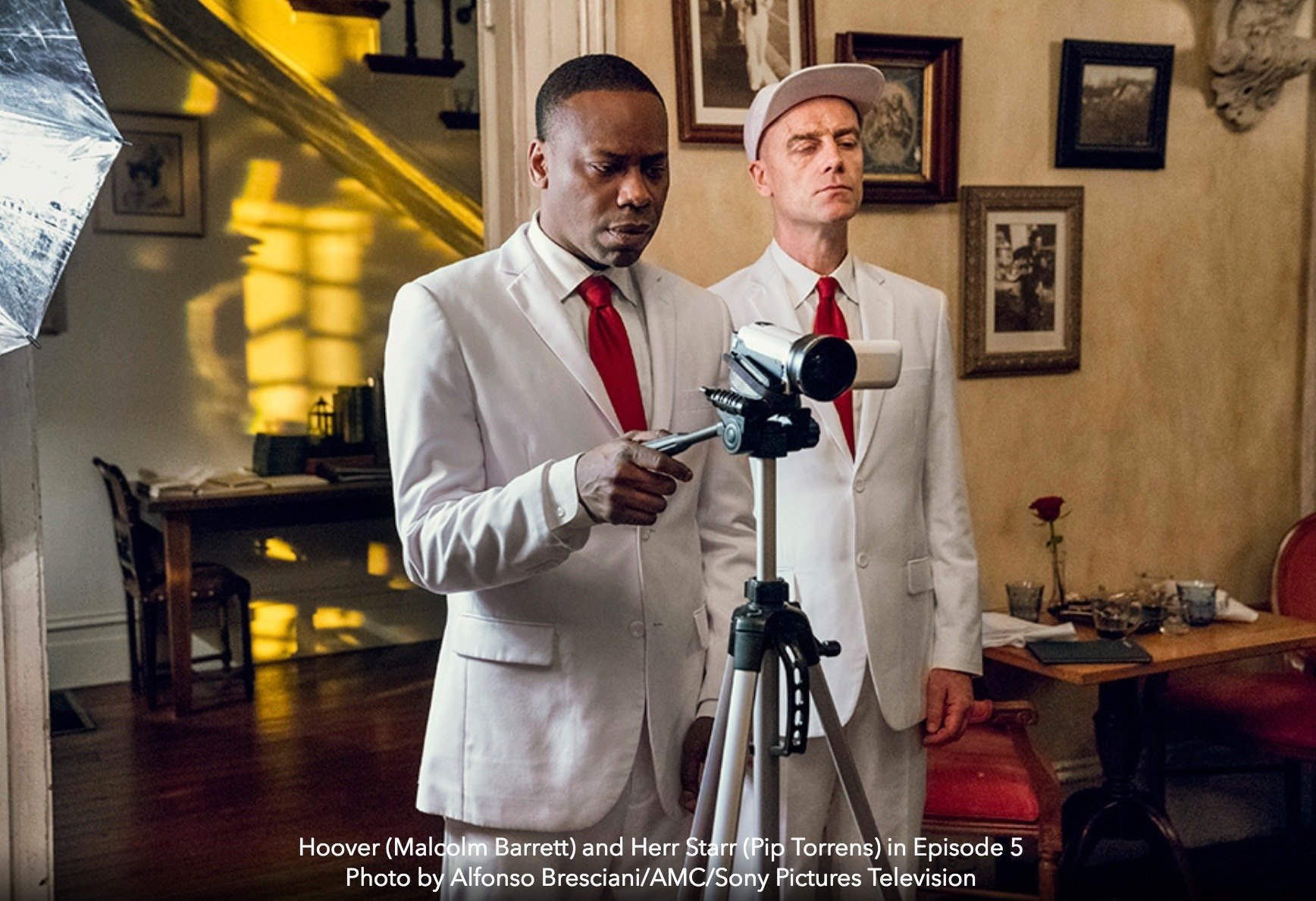 Surprise! A group busts in the bar and kidnaps the already kidnapped Cass and takes him to a brick cellar. The group unmasks, and among them is BirdGirl666! They all pop in their fangs and say their group mantra, “Welcome to Le Enfant Du Sangre! The Children of Blood!” Episode 5 ends.