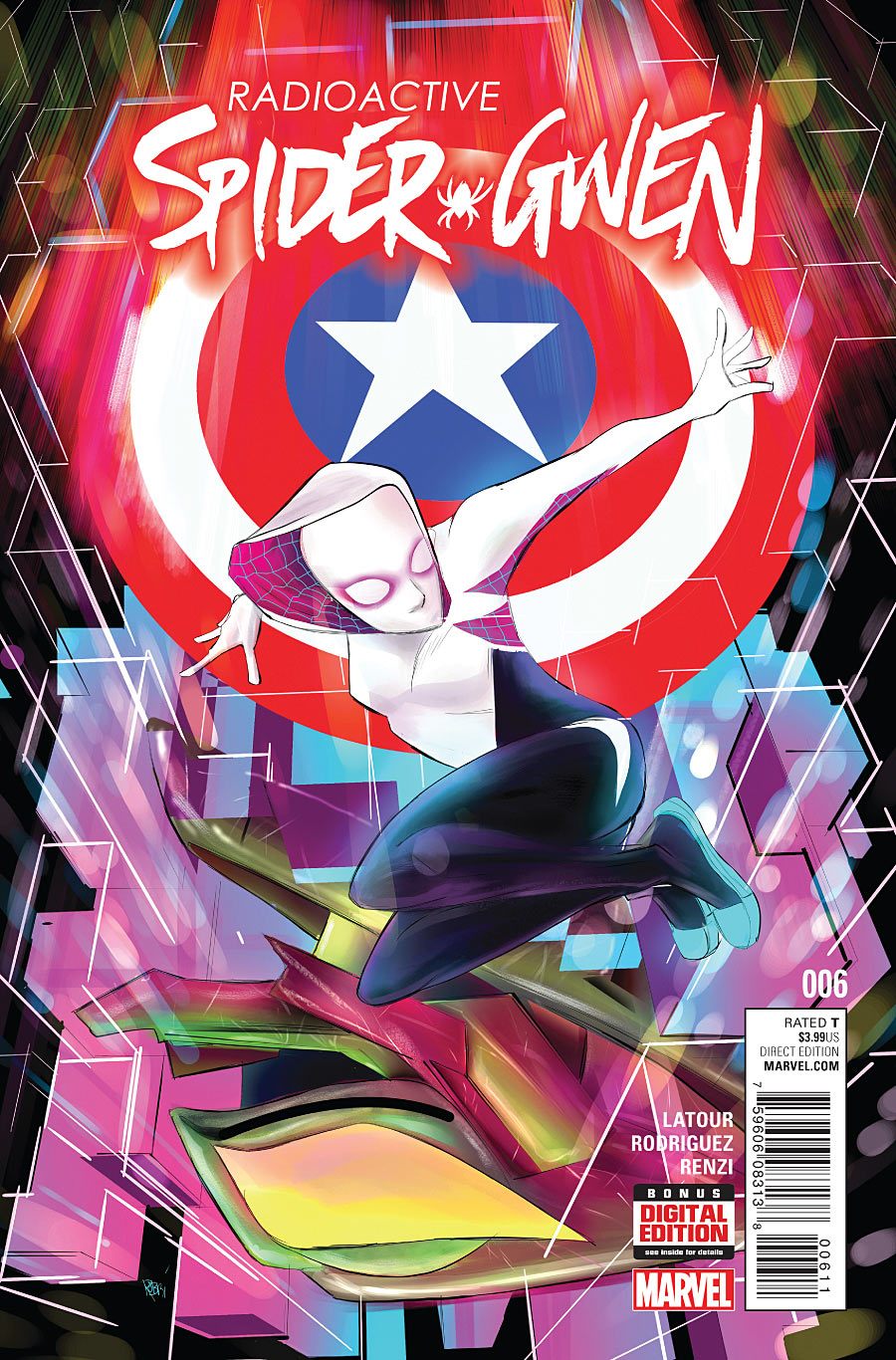 This was everything I wanted. Spider-Gwen’s “Greater Power” arc concluded with a great build of tension, a fun supporting character in Captain America Samantha Wilson, and, most importantly, a lot of heart. The heart and humor are what make Spider-Gwen what it is, and issue #6 highlighted the best of what Jason Latour does with this series.

Spider-Gwen #6 takes place in a narrow window shortly after a revenge-seeking Harry Osborn pulls of Gwen Stacy’s mask, revealing his enemy as one of his closest friends. Two ways this could have gone: path A takes Harry on a murderous rage, deciding that despite their friendship, Spider-Gwen is a bigger enemy than Gwen Stacy is friend. Path B is the opposite, with Harry finding Gwen’s humanity in Spider-Gwen’s mistakes. It’s up to Gwen to help direct which path we travel. As a reader, equally important to the path chosen is the way Gwen gets us there, and that is – beautifully – the majority of this issue.

And in the meantime, we get some great visuals of our homie Gwen Stacy. There’s just something about a Spider-hero holding Cap’s shield that’s always utterly amazing.

Radioactive Spider-Gwen is visually stunning in a way that makes nearly every scene memorable. It’s nothing that hasn’t been said before – Renzi’s colors are electric and perfectly fitting for this book, and it deserves repeating often, especially following an issue without the signature style readers have grown accustomed to seeing. Rodriguez and Renzi’s artwork and Stacy’s conflict combine for some amazing panels.

By now it should be no secret that Spider-Gwen is a great character worth every fan’s time. What’s next for Gwen Stacy? Following this arc, Spider-Gwen writer Jason Latour will release a series alongside Silk writer Robbie Thomas and Spider-Woman writer Dennis Hopeless in Marvel’s Spider-Women. Excited? For this writer, the answer is obviously… sorta. While the continuation of Spider-Gwen is well-deserved, and the prospect of her teaming up with the other Spider-women again can make for a fun book, I’d be disingenuous not to mention worry about a team of all dudes writing a team of all women, yet again. Especially after the many problems I’ve had with more somewhat recent writing of Spider-Woman. However, giving the series the benefit of the doubt I’m excited for what comes next for Gwen Stacy’s adventures. So far they’ve been a wonderfully fun ride.