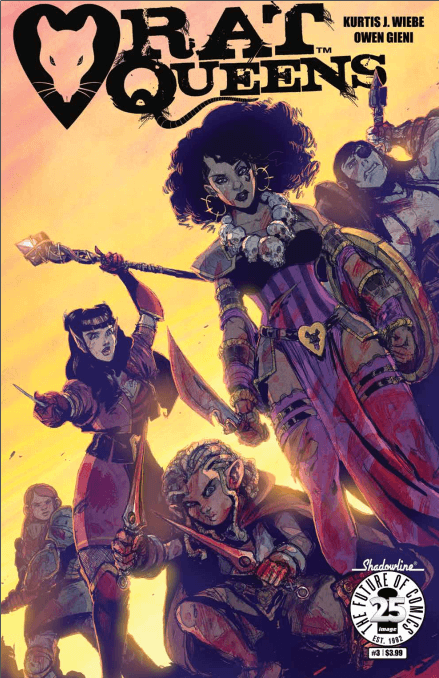 This may be the most unexpected issue of Rat Queens I’ve ever read for a variety of reasons, and I don’t mean unexpected in a good way. I say that in the context of a comic that’s had more ups and downs than a series twice its age. The first two issues of this reboot have been respectable. But Issue #3? Let me list the number of things in this issue that don’t make sense.

Starting at the top, you’ll remember that The Queens were drunk in a cemetery and had accidentally raised an army of zombies, like you do. They meet a band of paladins who immediately come to their aid. 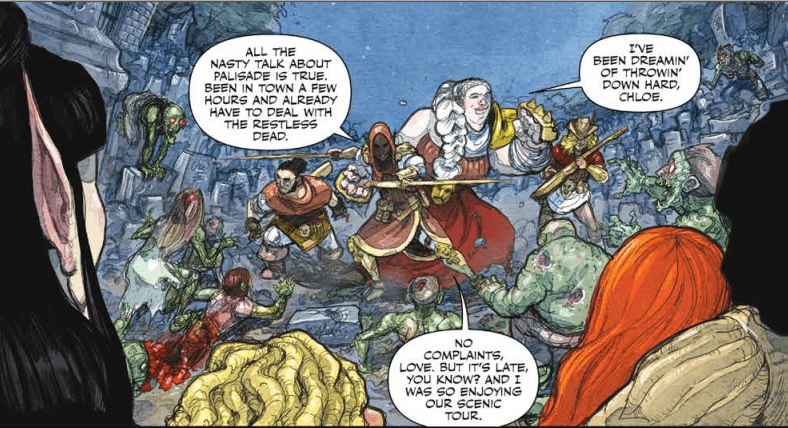 These paladins kick zombie ass while the Queens stand aside and watch. This is Nonsense 1. Hannah doesn’t cast a spell. Violet doesn’t hit anything. They watch. After the carnage, we’re introduced to this new band of do-gooders, The Chorus. They have a bard for Ny’goth’s sake. These are the folks that I expect the Queens to hate for all of their warm and fuzzy wholesomeness. But no, no hate. No rude quips. Hannah is *helpful* to them. Since when has Hannah been helpful to anyone? That’s Nonsense 2.

The Chorus goes off to hunt for cult-like activities, helpfully overlooking Dee’s connection to the crazy octo-cult that has eaten Palisades (Nonsense 3).

Returning home, The Queens are greeted by a scene of such uncomfortable hilarity involving Hannah’s parents that you have to read it to believe it. Who knew you could have astral sex through a spirit stone? Well you can. 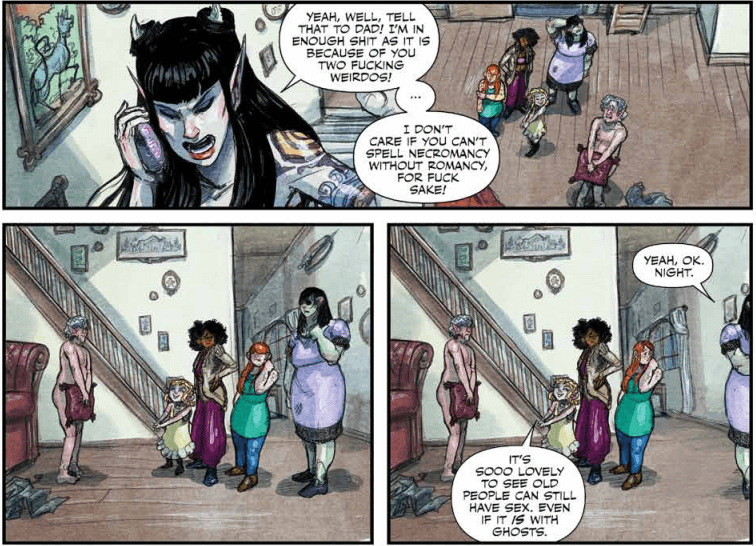 The next morning is multiple pages of plot exposition as the Queens have breakfast, explaining the cult-hunters cult hunting and the state of the cult in Palisades. Nonsense 4: there’s more emotional unpacking in this scene than perhaps ever in the comic, which has made it’s mark in part by revealing just enough emotion in the characters to move the plot along but not so much as to slow it down. Here, the plot slows to a crawl. The only combat that the Queens engage in in the entire issue is handled in one panel. And if that’s not the Nonsensical-est of the Nonsense, I don’t know what is.

By the end of the issue, things seem to back on track, with the return of an old nemesis, but the trip there isn’t really worth it. This comic is *talky*. And *emotional*. And *low on action*. And the funny beats are all in the hands of someone other than Hannah, Violet, Betty, and the increasingly silent Dee. The whole issue feels like it doesn’t quite fit with the rest of the series. Maybe it is set up for the next big thing? I hope so.

We’ve been riding for Rat Queens for a long time. Find BNP’s other reviews of the series here.