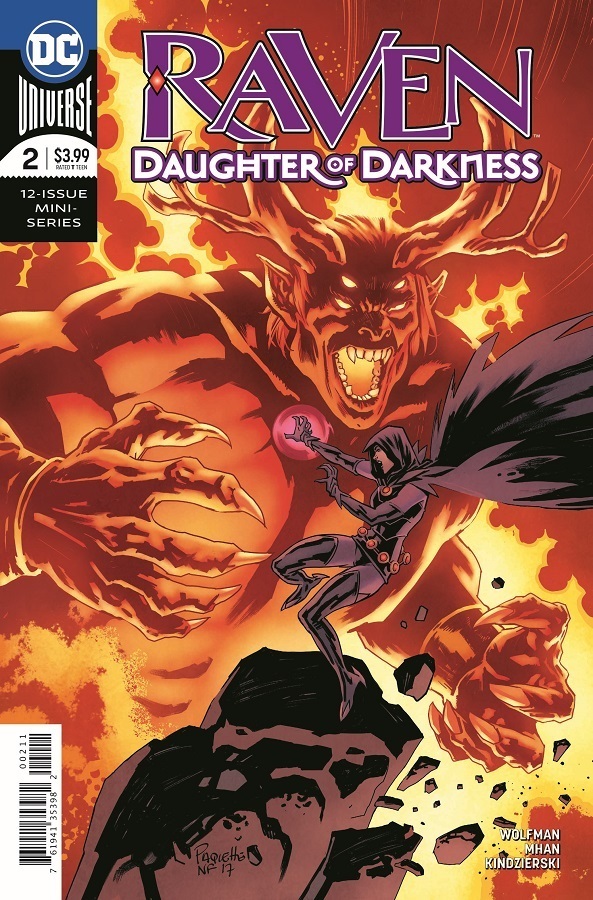 A strong start continues in Raven’s new miniseries as this issue begins with the rare sight of a terrified hero. Raven is on her back and frightened, thinking of ways to survive after having just helped save her attacker — a stranger named Azure — from being killed just shortly before. Raven acknowledges her fear to herself and readers, and her open honesty continues to be what makes her endearing as a character. She’s awkward and unsociable in the way everyone feels sometimes, and that relatability is so rare as to be refreshing when you read it. Particularly from a hero. Honest self-awareness is Raven’s superpower when it comes to connecting with readers.

The mystery continues as to who Azure is, as well as the army trying to kill her. An even bigger mystery are the puppet masters watching and orchestrating from behind the scenes, their motives still unknown to both us and Raven. We move a bit closer towards answers though as Raven sees through the fire to the man watching her, but not before several emotional scenes with her friends, and then Azure who unknowingly crashes their party. The supporting cast is great in this book — Raven’s family and friends highlight her humanity and desire to do good for others, and it shows Raven in her most caring and heroic light, not because she stops bank robberies or swoops in to save lives, but because her ability to feel others’ pain as an empath highlights how much she cares strongly about people.

Artistically, this book continues to shine with a combination of Raven’s transformations and sideshow-like freakiness courtesy of Azure. The pacing is great as it weaves us seamlessly through Raven’s personal life and her heroic one, painting a complete picture of her character in all her various facets. Her past, her new family, and the ongoing mystery all balance together, so while we care about uncovering the supernatural mystery around her we’re also interested in the slices of life in between that make her who she is. Overall, Raven is easily one of the most likable characters you can read right now, and this miniseries is on pace to be as good as we expected.

Reading Raven? Find BNP’s other reviews of the series here.