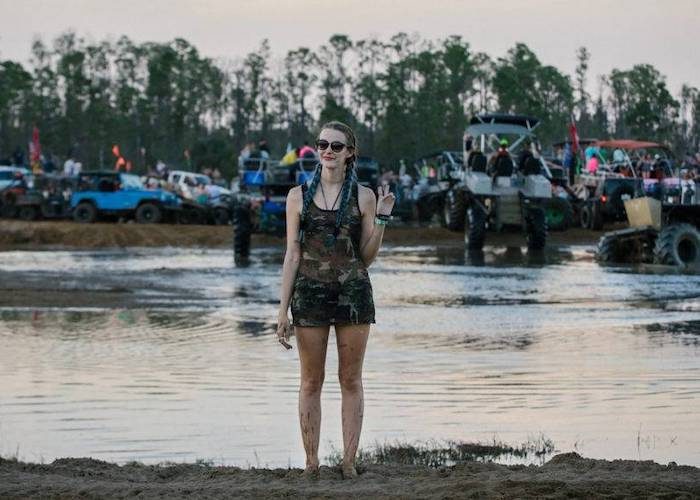 To state the obvious, the subculture of mudding enthusiasts isn’t a common haunt for readers of this site, nor writers like myself. To the subjects of Red, White and Wasted, a documentary on a family of mudding enthusiasts and their peers in Florida, their shrinking subculture is the reason for concern: swamplands formerly used for mud trucks and parties are being taken over by concrete and industrialization as big business and liberal values push their way of life towards extinction.

What first interested me in Red, White and Wasted was curiosity about its framing. I wanted to know if Confederate flag-waving, southern whites would be sanitized as mere “mudding enthusiasts” fighting for a morally neutralized and misunderstood “way of life,” or if the film would show its subjects in their own words on matters beyond monster trucks and MAGA catchphrases. I was thankful, at first, when I realized it was the latter: that Red, White and Wasted offers an unblinking look at right-wing, Trump-supporting, white supremacists. The short-lived gratitude was chased by horror at every comment, spoken without awareness or irony, as a monument to the hopelessness of our national experiment’s survival.

What goes down at the Mudhole

The documentary is shown through the lens–both metaphorical and literal–of Matthew “Video Pat” Burns and his daughters. Nicknamed “Video Pat” for having always having a camcorder in his hand, he was something of a local celebrity in the outskirts of Orlando for his enthusiasm for mudding and cataloging the parties. The parties were held at Swamp Ghost, the last mudhole in the area that was being shut down, sending Video Pat on a journey to find his people and leading him to the weekend-long Redneck Yacht Club, a Maris Gras-like party of sex, Bud Light, and mudding.

Along the way, viewers gain observational insight into the lives and motivations of a specific type of Florida person through brief, candid interviews. Brooklynites Andrei Bowden-Schwartz and Sam B. Jones directed the film and stay behind the scenes as subjects open up to the camera. Much of the documentary was filmed in 2016 where chants of “Trump that bitch” were at a fever pitch, undoubtedly contributing to their willingness to unabashedly share views that may have previously been too taboo to share with the larger public.

Aside from the observation of it all, the story of Red, White and Wasted is strongest through Video Pat’s daughters, Krista and Jessi. They live the culture, but also provide a strange expression of desire to be less racist while still expressing deeply racist views. When they get into relationships have kids, they begin to represent the question of what’s to come for future generations.

The meaning of ‘country’

In one scene Krista is in tears, less about her unplanned pregnancy and absentee father of her soon-to-come child, but instead about how far society has fallen. Everything was better 80 years ago but she was robbed of having seen it–having not been born yet–and now her son will have to be raised in this worsened society. Scenes of an industrialized Orlando flash by as she sobs in the back seat of the car, later followed by her father explaining that they’re being outnumbered in Orlando by people who don’t support the Confederate flag.

Country pride is the running theme of the 90-minute documentary. Not country as in the United States–though that’s an obvious undercurrent in the language of several white supremacists as they imply the country is theirs to slip away–but “country” as in the rebel spirit of the south. Without narration or meaningful captions (aside from names and locations), each subject answers the question of what makes a redneck, and whether they’re proud to be one. Each of them states their loves of trucks and the like. Trained with a broader understanding of the connotation, they recite what they are not in a preemptive defense: they’re not racists.

It’s easy to get lost in the woods as their non-racist self affirmations are followed by blatantly racist statements–as a warning, expect to hear “nigger” rolled comfortably off the tongue, in reference to Black people and in threat to their lives, in the same breath as denying the speaker’s racism–but of course it’s a fool’s trap. More interesting is the blindness that leads these largely poor, working-class, rural whites to mention Blacks and immigrants as foils to their lifestyles as Disney takes the ground from under them. It shouldn’t come as a surprise, and it doesn’t, but it can be jarring to see the need for white supremacy and rebel pride live beside a passive, almost dismissive disdain of what actually threatens them, and see it concentrated within an hour or two.

By its end, Red, White and Wasted is scary in its subjects’ convictions that a country boy will survive–that their lifestyle, no matter what, will refuse to evolve. That’s the rebel spirit; the determination to not change.

For Video Pat, his old world is gone and he discovers that the Redneck Yacht Club isn’t the place for him either, leaving him without a home save for nostalgia, his daughters, and hope that his newborn grandson will continue their heritage. I’m less concerned with mudding, whether mudding is a reputable hobby or not; personally, I think dismissing them for their hobby would be a mistake, falling into the “condescending elitist” accusation. What Red, White and Wasted does well is inch back the curtain to show the beliefs and attitudes where that hobby thrives. And part of what’s hopeful for them is terrifying for the rest of us.