Kirby: Right Back at Ya!, or  Hoshi no Kirby (Kirby of the Stars) as it’s known in Japan, was an anime about Kirby aka the Cute Pink Ball of Nintendo. The anime ran for 100 episodes in Japan, and in America it aired on Fox Box and 4Kids TV from 2002 to 2008. Now, surprisingly, whenever I bring this show up in casual adult conversations most of my colleagues have never heard of it. That’s probably because A) it wasn’t very popular unless you always tuned in on Saturday mornings, and B) they’re lame. So let’s all gather ’round the campfire and remember Kirby: Right Back at Ya!

The title Kirby: Right Back at Ya! is of course a reference to Kirby’s ability to suck something up inside of himself and shoot it back, hence sending it right back at you. It also references the fact that he can take the power of whatever he sucks up. So if he sucks up a frying pan he becomes Cook Kirby and uses a frying pan to attack and sends a monster flying into the sun. He really cooks up a great finishing move. Also, this show comes with a lot of puns.

So basically in every episode we’re treated to a cute Kirby transformation sequence whenever he has to absorb a power and fight. In the first few episodes we even get to see Kirby face Meta Knight, who uses this fight to train Kirby and test him. The show does a great job imitating the feel of the games, and it balances cuteness with action and comedy. Kirby himself can’t talk so he just makes a bunch of noises all the time. Another thing this show did well was show off Kirby’s skills. Kirby is very naive and is basically a baby in this show, but once he grasps the situation and gets serious he really shows how capable he is in combat. There was also a wide variety of monsters to fight and the show was an all around fun time. 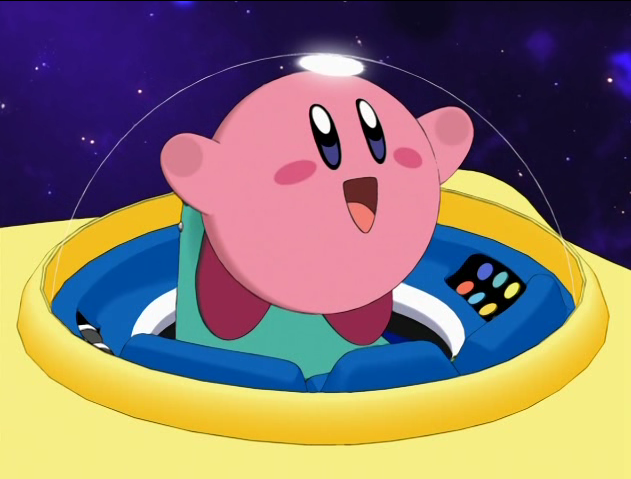 The plot was basically King Dedede just not liking Kirby. After Kirby lands in his town in his warp star he takes all the popularity and Dedede gets jealous and always purchases monsters from N.M.E. to try and defeat him. That’s the entire plot. There was also supposed to be a plot involving Nightmare and N.M.E. incorporation as a whole, but that wasn’t really explored until the show’s finale. The townspeople were also a focal point occasionally, and so are Kirby’s 2 friends that he makes when he lands, but honestly the episodes centered around them were some of the weaker ones.

Kirby’s powers and transformations were the best thing about the show. The way he needed to utilize certain aspects of his powers to find a weakness or to just fuck shit up was a sight to see.

All in all if you’ve never checked out this show then give it a try. The Japanese version has a better soundtrack in terms of the music in the actual episodes, but the English opening is BANGIN SUPAH HOT JAZZY FIRE!

So now that you’ve either remembered or been introduced to Kirby: Right Back At Ya! there are no more excuses. Go watch it in English or Japanese. Just remember the English version is 4Kids and there are a lot of edits, so be warned. It’s time to hop up on that warp star and ride with Kirby on his anime adventures.