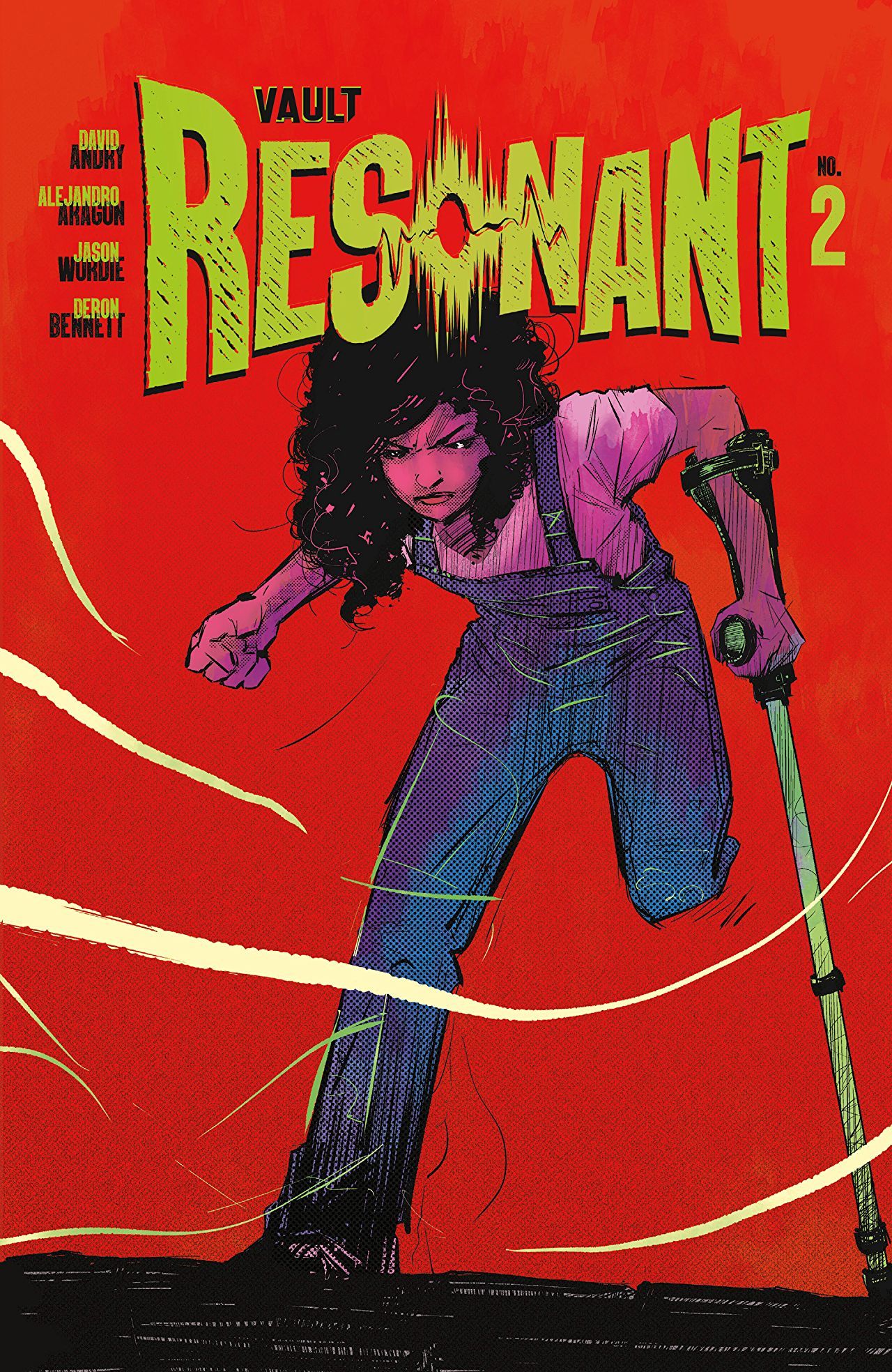 Resonant is back! The first issue brought the fire in a class of great first issues in the current wave of new comics from Vault Comics. We were introduced to this new world built out of the ruins of the old one and the family of Paxton and his ever-resilient kids. Paxton is on the road to find more medicine for the youngest of his children and the oldest, Bec, is left in charge back at home. This second issue opens to the aftermath of a Wave, a frightening phenomenon that has become a natural occurrence: a sort of frenzy where you lose your mind temporary and act out of your worst impulses and, perhaps, desires. This cover is a brilliant reminder of how possessed Bec looked last issue startling the hell out of me.

As I stated in the last issue, here’s your reminder, readers and reviewers the Waves also cause self-harm. As noted with the pages of Bec tearfully being patched up by her little brother Ty–out of time when the last Wave hit she choose to secure him first and did not have time to do the same for herself. What follows are a few pages of the siblings taking care of each other, securing home, and we see a glimpse of the sibling dynamic between them. I really like when writers take the time to write in small moments like this that help build up relationships and bring depth to the characters. 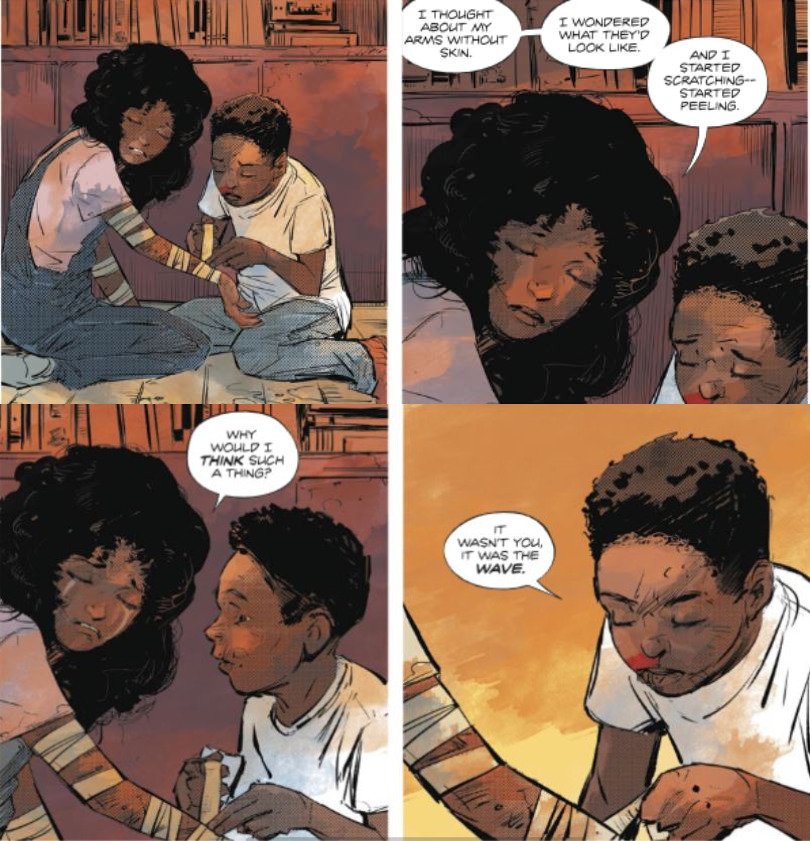 So, Pops is on the road, as we saw in the last issue…he is apparently able to maintain a zen-like state that allows him to tune out the garbage that the Wave attempt to transit over when they hit. Here, he’s leaving the road where he was approached by the stranger when the last Wave hit. These pages are helping the reader get an idea of who this man is. He knocked out the stranger who was probably willing to accost him for the chirpers, the insects that are kept around like canaries in mines, to ward of the danger of oncoming Waves.

Here, Paxton leaves the unconscious drifter and goes on his way. The dude is unconscious as Paxton knocked him out when the Wave hit to save both their lives, and as part of the bargain he made but didn’t have to keep, he leaves him a single chirper. Who was Paxton before shit hit the fan, and how long can he be kind and soft in this ruined world? What will it costs him to remain so? 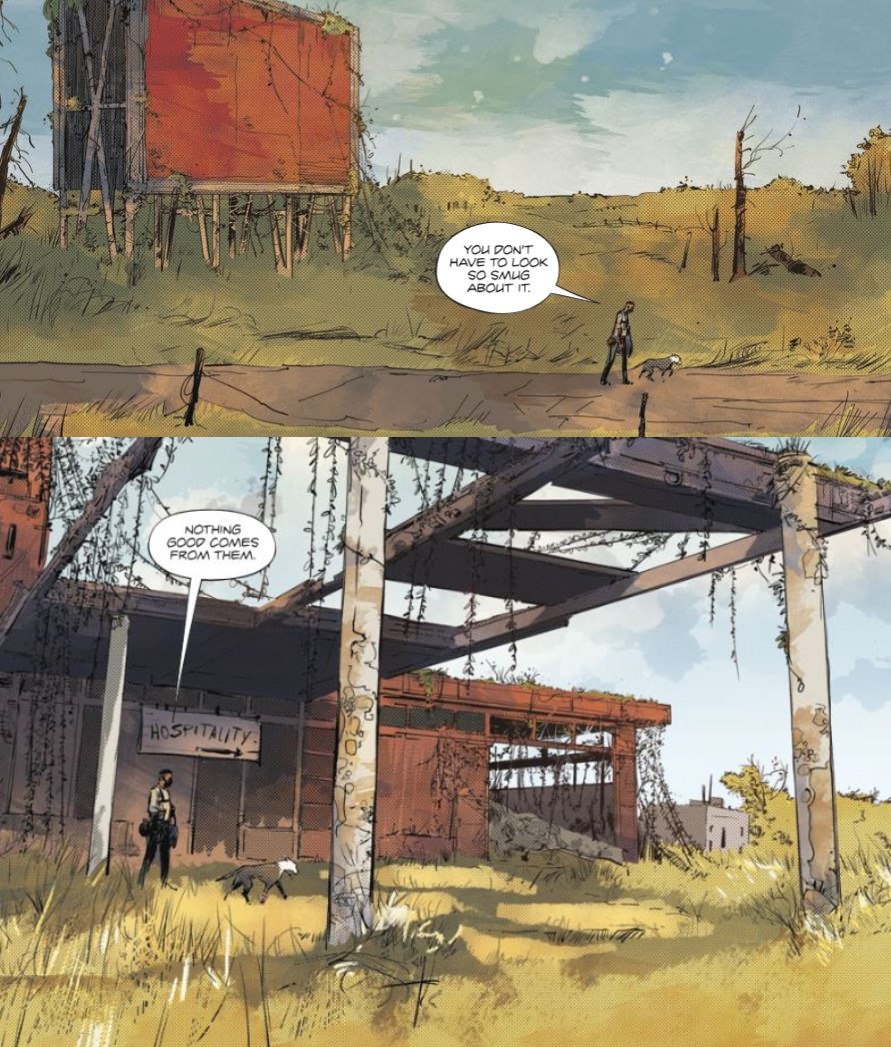 And look…the creative team put a damn dog in this book. And she’s such a good doggo. My God. Look, how folks treat animals is a really great way to show you who they are. (Sidebar: red flags on first dates include: how they treat wait staff, older people, children, animals, pets) This is such a rewarding set of pages, because there is something good in the apocalypse for once (something good outside the place where Paxton and kids make their home), and everyone loves dogs. It’s also a great moment to breathe as we treated to something horrifying and eye opening a moment later: a result of how people cope and adapt to living in this new world. Jesus. When the end of the world comes, I’m never talking to anyone else ever again.

Some of my favorite scenes from issues of Resonant seem to mostly be these pages and panels of mostly landscape when the characters on page aren’t heavily detailed and are in the background. The characters take the backstage, and the environment not matter how wrecked, ruined and overgrown with foliage completed with shadows and glimpses of what used to be are painstaking beautiful. There’s also some really interesting work down with the lettering and coloring especially with the encounter with the person we find out is named THE MAW (and their entourage) and also when Paxton finds a settlement with actual people and danger. Back at home the kids are faced with their first encounter with danger and another child is involved–and the art minding part of the creative team hype it up and then leave us on yet another cliff hanger. Whew. Resonant is certainly intriguing and the creative team is building it up to be a series I want to read more of.

9 Old Ladies With Batman Gadgets Out Of 10