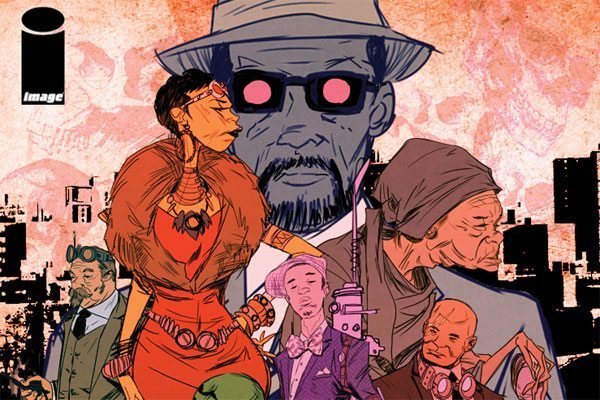 BNP had the chance to link up with the creators of Bitter Root to talk about their much-anticipated series at Image. If you’re unfamiliar with Bitter Root, it’s a story that takes place during the Harlem Renaissance, and it follows a family that hunts monsters that are fueled by hatred and bigotry. This interview is with eye-popping artist Sanford Greene, who you may know from his run on Marvel’s Power Man & Iron Fist, as well as doing variant covers for Black Panther. This is the first of three individual interviews with the creators leading up to Bitter Root’s release on November 14th. For a more in-depth look at the series, check out this conversation with co-writer David Walker from San Diego Comic Con.

Black Nerd Problems: The anticipation for this comic is crazy. I’ve been following your work since you were at Marvel. But you’ve obviously worked on other books. Is this the first creator-owned comic you’ve worked on?

Sanford: Technically, it’s not. I’m actually a co-creator with Chuck Brown (Co-writer of Bitter Root) on a very, very, very limited series called Rotten Apple that was over at Dark Horse. We were slated to do a series over there, but then Marvel came calling about doing this thing called Power Man & Iron Fist, and the rest is history on that.

BNP: Coming from Marvel and starting this Creator-Owned journey, the built-in audience isn’t exactly the same. Do you find that this makes you more eager or anxious about the book’s release?

BNP: You’ve got some incredible variants coming from Denys Cowan, Brittany Williams, Mike Mignola, and Bill Sienkiewicz. How did you go about seeking them out to work with you?

S: I begged. I begged a lot. Well, maybe not begged, but I definitely reached out to them all personally, and they were all excited about it. That was really cool, because they could have easily just said no, or that they didn’t have the time. But I told them the premise of the story, and they were all really excited and thought it was something that was fresh and has a lot of weight to it. And I think they just got inspired from what we shared with them. 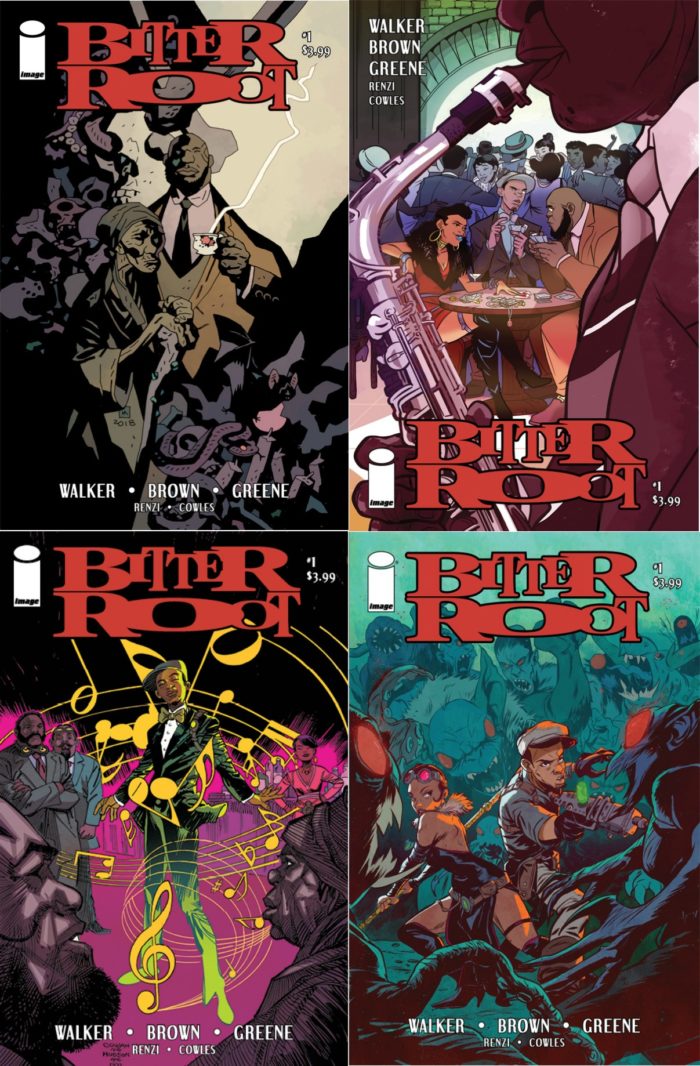 BNP: Definitely. So many people wait until the trade comes out before buying something. But single-issue sales are really important for comics in general but specifically creator-owned ones. So, it’s a dope incentive to have these huge names attached from the jump. Your personal covers through the first arc are gonna be connected, right?

S: Yes. For me–like you said, having all these great creators doing variants–I felt like man, what could I do that would stand out a little from the pack? Because there’s no way I could bring any real notoriety to my art when we’ve got a Mike Mignola cover or a Bill Sienkiewicz or any of those names. So rather than trying to compete with that, I just thought it would be kind of cool to do something that was a little off the beaten path. And I had already been kind of known for this connecting cover thing when I was doing stuff at Marvel on Luke Cage and Black Panther. And it just dawned on me like, ‘wow I’m doing this stuff for these guys, I need to do this for my own thing.’ So that’s pretty much how that all came about.

BNP: And you’ve got incentives for the trade as well. I know you’re gonna have essays and stuff along those lines. But are you going to contribute anything art wise to the trade that’s exclusive to that?

S: The trade is gonna have this back matter that we’ve created with world building and also some essays from different scholars on the Harlem Renaissance time period. We thought that would be pretty extraordinary, because it adds an academic component to it. But it’s not too heady or wordy to where the average fan wouldn’t get involved with it. I’m entertaining having character sketches for each issue based on the characters and the world. With the trade, we haven’t fully fleshed out what we’re gonna do yet, but we’ve got some ideas that we’re pretty excited about.

BNP: You do a good job of introducing these characters in the first issue. We presumably meet most of the main cast, and they’re already really distinct from one another. Who would you say is your favorite character to draw, and who do you find the most challenging?

S: Oh man…my favorite character to draw is also the most challenging character. And that’s Ms. Etta, the old woman. She has so much character, and I try to draw her expressive and yet still keep her in that same vein of where she’s regal and stoic. Even though she can kind of go off the beaten path emotionally, we don’t really express all of that in the first issue. But there will be future issues where she’s going to show herself and trying to keep those same aesthetics that are unique to her…that’s challenging. It’s a lot of fun but it’s challenging. 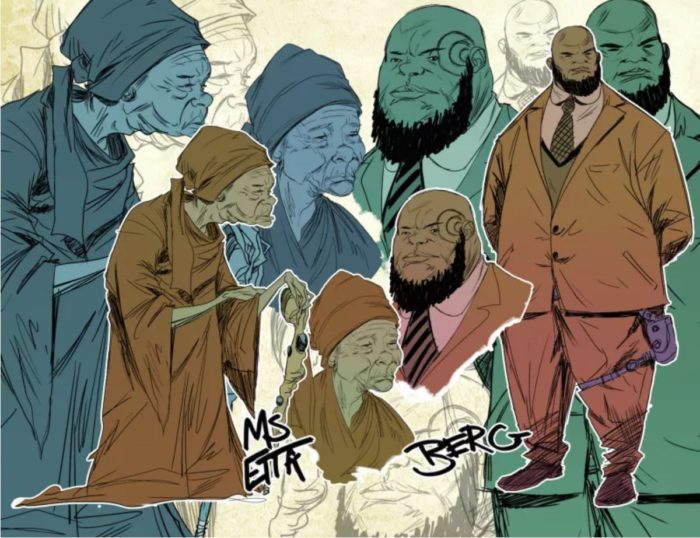 BNP: A lot of times in interviews, people are asked what inspires them to create, but I want to know what about working on this story, especially with the rich historic relevance, has inspired you in life?

S: It’s kind of easy to say every aspect of it, but honestly it was before I did the actual book. It was the research. Discovering things or at least kind of confirming some things that I sort of heard about in passing conversations. Points in history. I don’t want to spoil this particular event that takes place in the story, but there’s an event from right before the Harlem Renaissance—and when I say right before I mean maybe three or four years prior. Something like that. And it was essentially the Harlem Renaissance before it was in Harlem—if that makes sense. It was inspiring and also very sobering and somewhat depressing to discover some of the events that took place during that time. So when I was doing that research, it really kind of made what we were doing with our time period and with our story—it made it that much more meaningful. And it honestly made me start paying attention to who we are today as a people—of color specifically. Just how we go about doing things. It’s fascinating because what took place way back when honestly still affects us today. There’s good and bad. I knew a lot of this but to have the research confirm it really made it that much more poignant.

back on the inking grind for #BitterRoot issue 4! @BITTERROOT18 pic.twitter.com/4PgGPRmGUX

BNP: What would you say you’ve learned about yourself while doing this book that you wouldn’t have learned if you never did it?

S: I’ll give you a practical answer and a philosophical one.

S: The practical thing is realizing how much work I can do in this amount of time. Because this is a creator-owned title. Working on Power Man & Iron Fist, that was done with the aid of the machine, right? The Marvel machine. That can be a grind in itself, but when you’re creating your own thing you are the machine. Doing a series for Marvel, we just created and that was it. It was no marketing involvement. There was no dealing with printers. There was none of that. Now, it’s full investment, almost to the point where it’s really sweat equity. And then on top of that—trying to meet a deadline. Trying to be even more creative than you’ve ever been before. Because this is your thing. To try and balance all of that, thus far the wheels haven’t fallen off yet. Even just being innovative in how we go about being creative in our marketing and all those things. We’ve already done a few speaking engagements that are outside of comic books. Like we’re doing signings and stuff but not at comic book stores. They’re at libraries, schools, HBCU’s. We’ve got a book tour that we’re doing next year where we’re going to a lot of the HBCU’s.  All that stuff has really played a significant part in what we’re doing. And of course, with the aid of David and Chuck—those guys are geniuses at what they do. It’s just realizing that man, you know, you’re doing a lot more than you’ve ever done before. And you’re still maintaining. At least for now.

S: I think the philosophical thing kind of goes back to the previous answer. It’s understanding that my contribution really does matter. And what I mean by that is not just from an artistic standpoint but just the voice. The person. You will reach somebody. I think for me just kind of reaffirming that—you kind of already have that understanding to some degree, but then to already be getting interviews and feedback from fans saying how excited they are for what we’re doing, it just kind of gives you that feeling of empowerment. Something that we knew as creative people we had, but especially now with this day and time with everything being so polarizing, we’re doing a book in all of this. It’s such a pivotal moment for us. For everyone. To put out a book now? Like this? That’s definitely something that I think we can look back in history, at least in the industry, and we should be able to feel pretty encouraged by what we have here.