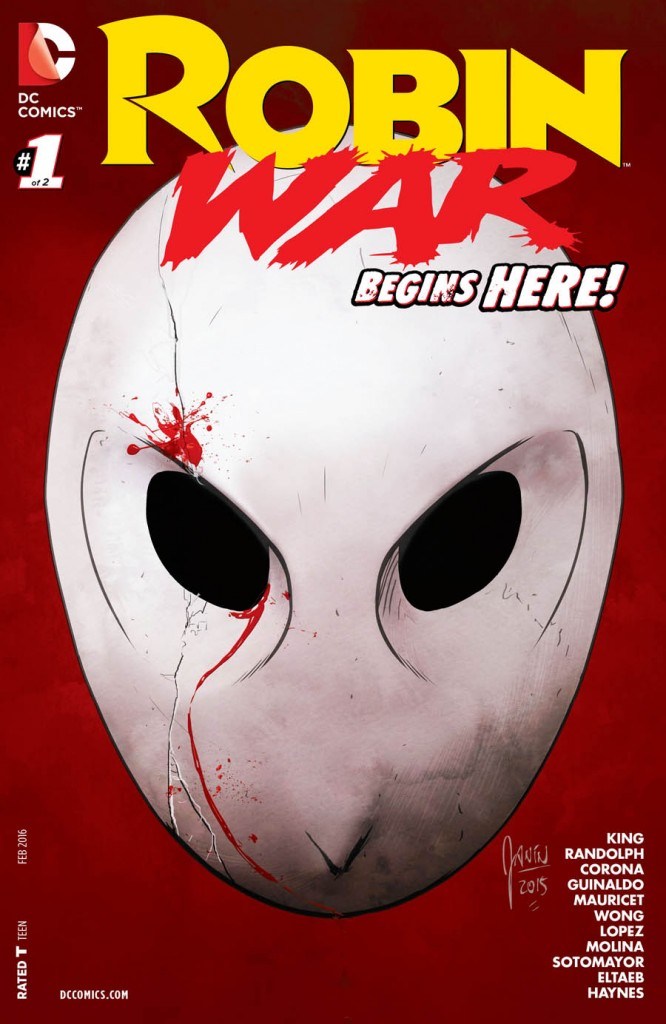 Gotham has been swarming with more and more costumed heroes for a very long while now. Batman has always tried to keep them in check, but with Bruce Wayne no longer in the cowl there’s a very large gap left that Gordon himself can’t fill entirely. Enter our inner-city heroes of the We Are Robin squad. We don’t know how many of them there are even, but the sheer numbers is a boom in Gotham’s vigilante population. Now let’s take that knowledge and kindle the spark of what happens when an well intentioned untrained teen vigilante fucks up royally and basically ruins it for everyone? Enter: Robin War.

Much like how one wrong move from a group of heroes over in Marvel brought about the big bang of Civil War, Robin War starts off the same way. A well intentioned teen stopping a crime but his inexperience not only gets the criminal killed but an officer of the law merked as well. This is something we knew was coming and hits just at the right time with this series. I’ve been looking forward to this book for a while as the We Are Robin cast will play a heavy role.

Due to the actions of one teen, the teenage vigilante wasteland is getting laid to waste. The police are coming down on vigilantes which can have you saying, “alright fair” but they are going overkill on this shit. You can’t wear any Robin-related merchandise, paraphernalia, clothing, straws, forks, shoes laces, and the list goes on and fucking on. This is obviously some fascist shit happening and the police rep responsible for this is pushing their own agenda as well.

Man, being a vigilante is hard as fuck now, but don’t even bring up being a vigilante of color. Where as every teen could be taken into custody on some vigilante shit but this is just another cause that police have to fuck with minorities man. Which is a great intro for our dude Duke Thomas to come into play. We already know he doesn’t fuck with cops, so this serves as great opportunity to show his stance on the situation. Randolph does a great deal of justice describing the profiling that’s happening visually right in front of us.

Tom of course brings in the original Robins; Tim Drake, Jason Todd, and the best of them all Dick Grayson (I know they say Drake wasn’t really a Robin in this new earth shit but fuck that noise). Damian shows up and is straight up ordering everyone around with his 11? 13? year-old ass self. I wasn’t really feeling Damian’s involvement and mostly wish they focused on the We Are Robin cast as Duke Thomas was addressing the best way to handle this whole issue as well. Damian’s dismissal of the folks that choose to take up the role of protector is on some privileged shit just due to the fact that he’s Batman’s kid. He’s also not around Gotham anymore so… but lemme not get on my shit about that.

This title is going to run through the Robin and Bat books. I am loving the approach and story as it reflects the current climate of Gotham and requires the Batman trained Robins to come back and see what their symbol as vigilantes has transformed into in their absence. This new generation of teens are trying to not be heroes but just protect their block.