After that return of the Gibborum Jr. and Alex Wilder, our team finds themselves in a strange situation in issue #15. How the hell do you get out of the clutches of 12ft mini Gods? How do you ditch the dude who tried to sell you out (well, not Nico) to the parents of these giants? As it turns out, pretty easily. You just rip your ex-flame a new one for being an untrustworthy piece of shit, then politely ask the Gibborum bouncer to step outside for some fresh air. 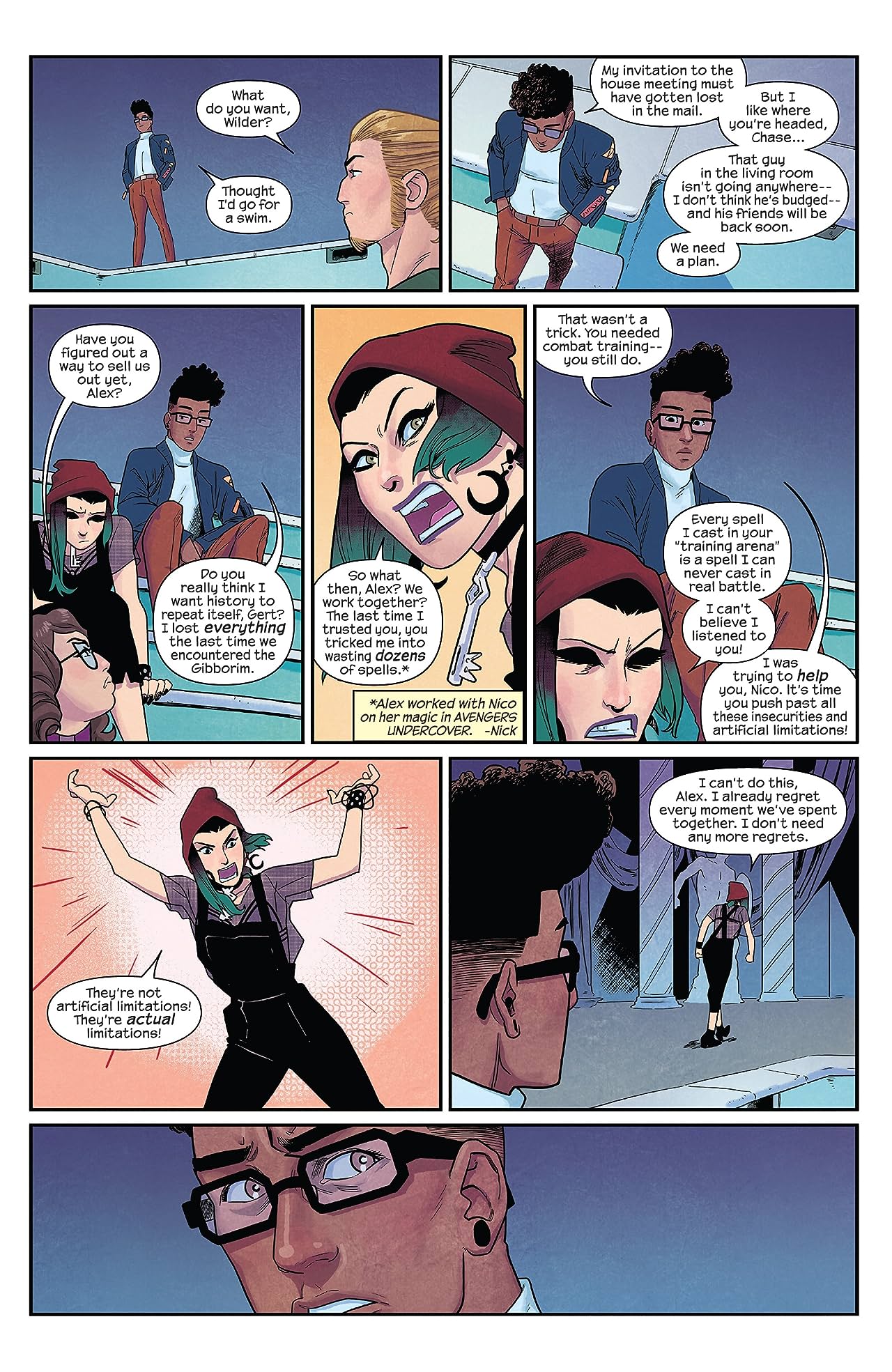 Rainbow Rowell is so dope. She cuts the tension and hostility of those opening pages like a sourdough pancake breakfast, which is as comforting and insightful as you could imagine. Nico exits the Runaways hideout and is immediately subject to Staff of One abuse. Apparently it’s the right hour for it to emerge, and emerge he did. In the place of her usual staff hovers a sly, handsome, elfish gentleman who has to put Nico on to the realness…but first, pancakes! Though he wasn’t given a name, Staff of One became the focal point of this issue. For good reason, too – he has a long history with the Minoru family, and goes into detail about how he wound up in this situation.

While the story of his demise is tragic, we find out how much this “new” life of his is a mercy that could’ve just as easily been a grave. Great-Great-Gramma Minoru beat the brakes off that boy, but instead of facing the end of her blade she offered him the opportunity to live like this. With the courtesy to beg for his freedom every now n then. Peak Petty LaBelle.

In the end, Nico has to determine what kind of Minoru she is. Being pretty much done with magic, she decides to set him free. His immediate villainous reaction to becoming “the most powerful being now that no Minorus stand in his way” didn’t exactly give her the confidence to unleash him upon L.A. and the world. Instead, they settle on an agreement. She does him the biggest favor in the smallest of increments. She allows him a sprinkle of life every time she uses a spell. A drop of his essence will seep into her. A faint voice in the back of her head. A little ear always listening out. There’s no way this couldn’t go bad for Nico! There’s no way he could take over her body after letting him in little by little! There’s no way she could become the Runaways greatest enemy off the strength of her kindness….

Bast praise the return of Kris Anka! There’s just something about the way he draws life into our team of misfits and reluctant heroes. That shadowy closing panel alone says so dam much! Matt Wilson has been the epitome of Anka’s match made in heaven, because the vibrance of his coloring bodes so well for the art. I love myself a good origin story, and when done properly I like the expansion of said origin even more. Rainbow Rowell did that for the Runaways leader. She keeps finding new, inventive ways to keep this comic fresh and exciting. I don’t know where they’re going with this updated Staff Of One backstory, but I can’t wait to find out. The possibilities are endless! Issue #16 drops next week, so check back in to see where we’re heading. From the looks of the cover, it should be a Christmas spectacle!

8.2 Bloodletting Ritual Reversals Out of 10