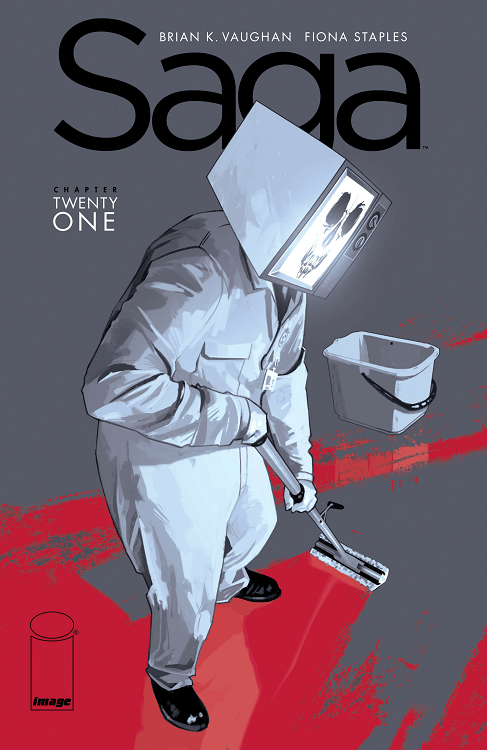 To say that I’m emotionally invested in this comic at this point is truly an understatement.

I’m in it. Till the wheels come off. Till the the special after credits scene Marvel leaves us…wait. Sorry, wrong fandom.

The newest issue of Saga picks up with our fave Alana questioning her (dream) job again and her as a mom, as an adult balancing things on a crooked scale—-substance versus a paycheck. Personal sacrifice versus responsibilities. Being in a position of being better off versus winging it alone.

Reading Saga is, like watching a child go grow up. The true narrator is, of course, Hazel, who at this point has grown to a adorable toddler. She is narrating her life story: which we all sadly know at this point is offering us on a silver plate the glimpses of the collapse of her parents’ marriage. We’re also starting to see glimpses of the people her parents are growing into: their roles changing and how the people they surround themselves with. This IS Hazel’s story. We’re watching her grow up. Alas, we’re also watching Alana and Marko grow up too. I know, I know…Nobody likes change. On the other side of the galaxy, the young princeling is still in the capable arm of his kidnapper, a not-royal fella who have or may not have a few screens loose of his head. We see the parallels of this child and our fugitive Hazel grow: Hazel still has both parents (together at this point) while this child of royal blood is now one parent less and one who is now back in commission. (Or is he?) LOOK, I NEED BRIAN AND FIONA TO KNOW THAT I APPRECIATE

WHAT THEY ARE DOING WITH THE SCREEN/HEADS

OF THE ROBOT FOLK. SRSLY.

This issue ends with much happening—much happening behind the scenes. Much happening internally, slowing pushing  out from under the surface to later to  reveal itself into actions and words… Issue #21: Done. Just a pit stop until next month.