So have you ever been on Tumblr and you see a gif or a screenshot? I’m talking an amazing gif or screenshot of an anime and it just makes you want to see more of it — whether it’s because of the beautiful animation or because you just want to know the context of a specific scene. Well Saint Young Men is straight up an entire anime where you can take just about any scene and put it up on Tumblr and someone, somewhere will see it and want to watch the show just to see why it’s happening. Be warned though, if you don’t want to see Buddha and Jesus be best friends on a day-to-day basis then this show isn’t for you. This show also might not be for you if you just think the idea of this show is offensive in any way.

Saint Young Men is a manga created by Hikaru Nakamura and was made into a 2-episode series and a movie. It isn’t for everyone. It’s a true slice of life comedy show that isn’t over the top with its reactions or situations and isn’t trying to shove anything into your face. It’s a pure lighthearted show. Buddha and Jesus are roommates in an apartment complex. They do about their daily tasks like grocery shopping, trying to pay their rent on time, and just trying to socialize while not letting the fact that they’re basically deities hinder their goals or interfere with anyone around them. This show is basically “The Daily Lives of Buddha and Jesus” and I can’t stress that enough. Jesus and Buddha each have their own personalities that mesh extremely well together and really work out for a show like this. Jesus is a really passionate person who loves all things and looks like Johnny Depp, according to girls at a grocery store. He has a knack for finding the good in all things and having animals appear around him when he talks. He’s also full of determination. Fun Fact: He turns water into wine accidentally. 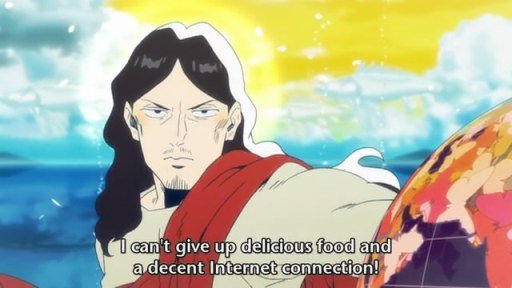 In contrast Buddha is more calm and thinks about things more and is more concerned with his appearance. For example, some kids made fun of his forehead, so when he passes kids, he hides it. Buddha is also afraid of things he doesn’t really understand like roller coasters and goes into a trance while riding one. When Buddha exits the coaster, he glows and everything around him glows. When he gets sad he loses color. He’s also the one who tries to shop for deals at grocery stores. Fun Fact: He shines bright and his hair gets mistaken for an antique.

All in all this show is an all-around nice show. It will never make you feel bad and it puts the characters in daily life situations just like normal people…except they’re Buddha and Jesus. You’ll enjoy this show if you want a quick watch that will make you feel good. Seeing how these two act together feels as real as any real people in everyday life and I think that’s what gives this show an extra kick. Saint Young Men isn’t really for everyone at first but after you start it I’m sure you’ll be converted. Pun intended.